Whitewater paddling can be an extremely dangerous sport, especially when seeking out rivers that have not been paddled before and take a lot of effort to get too. On Vancouver Island, these first descent rivers are much easier to visit due to the network of logging roads that span the entire island. Unpaddled rivers are all over the place on the Island and if you have the skills and confidence required to get down them, they are some of the best adventures but whitewater kayaking safety knowledge is a must, especially on first descents.

Paddling down a potentially never before seen canyon and seeing a substantial horizon line as a deep thunderous roar of water enters your ears is exactly what you’re looking for. As great as that is, it doesn’t come without some serious risks. When you’re paddling something where you have zero clue what is around the next bend you have to rely very heavily on numerous skills. Sometimes around that corner are some terrifying things. One of the biggest nightmares for a paddler is wood. Trees fall over and as the water levels go up and down with the rain and snow those logs get picked up off the river banks and deposited wherever the river so decides. 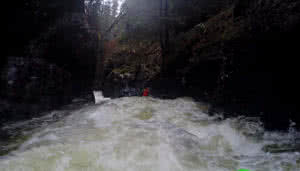 Looking at the stern of Ben’s kayak – the paddle companion.

I had a scary experience with fallen trees on a first descent recently. Hear the full story below.

I was paddling with my friend Ben up near Mt. Cain on Kunnum Creek. As far as we knew no one had ever paddled it. It was an easy access first descent with logging road bridges at the put-in and take-out. A few days previously I had hiked into a few sections to see the general theme of the river and what I saw looked good so Ben and I gave it a go.

Immediately once we got on the river we came across a logjam. It, being an open section of the river, was easy to portage so we kept going. We continued to run into wood issues and by the time we reached the main canyon we had already portaged 5 or 6 times. When paddling we were very cautious and would take our time by scouting everything and not committing to a canyon until we knew there was a possible way out if we ran into something.

We were picking our way down the river when I eddied out above a rapid that we couldn’t see too well. I figured we would get out and try to scout it but Ben came down and went right ahead into the drop without stopping. This was mainly due to bad communication as this was one part of the river that I had laid eyes on the previous day. I told Ben what I knew about the section and Ben understood it as everything was good to go, whereas I had not seen everything and definitely did not know.

After Ben passed me I didn’t have much choice but to follow so I peeled back into the current. As I approached a midstream boulder I saw Ben’s stern sticking into the air in the right channel. It took me a few seconds to click into what was going on and by the time I realized he was caught on a log it was too late for me to get to the left channel and I came into Ben backwards. The midstream boulder had perfectly shielded our view of two logs spanned between the rock and the shore. My stern shot down, bow shot up, my back slammed onto the log, and immediately water began pouring over my face pushing me underwater. 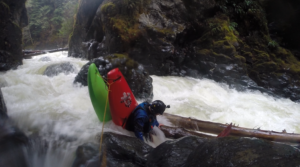 With all my strength I thrust my hips upwards, jammed my knees through my skirt, and within 5 seconds I was out of my boat and on the two logs that had us pinned. As I coughed out the water I’d inhaled I noticed that Ben was still in his boat standing on his foot blocks perfectly jammed between one of the logs and the rock. He was okay but was worried that our boats might flush when he got out of his boat and it filled with water. I tied my throw bag to both our boats and got myself in a good solid position to hold the potential weight of two full boats flowing downstream. Ben pulled his skirt, got out of his boat, and thankfully everything held tight jammed in the logs.

We now looked at our surroundings a little more and began to realize the severity of our mistake. During the exit of my boat, I managed to drop my paddle into the river. This left us in a relatively deep gorge with two pinned boats, one paddle, and a lot of fear.

Extremely relieved that we were both alive, we now put our efforts into getting the boats unstuck and out of the water. We found a couple trees hanging off of the cliff above us so we made an anchor on one and set-up a 3 to 1 pulley system to give us the leverage we needed to get the boats unstuck. 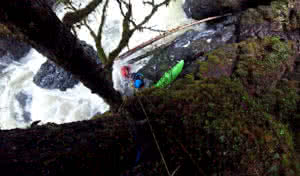 It was now 3 o’clock and we didn’t quite know if we would be able to get out of the gorge ourselves so we made the call to stash the boats under a cliff and come back for them another day. After some nervous scrambling around on mossy cliffs, I found us a way out of the gorge by going up and across a little waterfall. I tied my throw bag to my PFD and Ben loosely belayed me across and up. I made it to the top and quickly wrapped the rope around a large tree to belay Ben across.

We felt a huge sense of relief once we were up in the forest. Ten minutes later we were on a decommissioned logging road and a half hour after that we arrived at Ben’s car at dusk. We drove back to camp boatless where we cracked a few beers, made a monstrous meal, and talked about the day.
The next day, geared up with proper climbing gear and went and rappelled back into the gorge and retrieved the boats.

We were being somewhat reckless by paddling such a wood infested river, but we were not careless in our decision making. We ran that river as best we could with only one minor bit of miscommunication that happened to occur at the worst possible time. Having a spare paddle is something that is necessary for this kind of boating and not having one was our other mistake. Despite losing the paddle, and having quite a mission of problem-solving we were extremely lucky that things worked out how they did. Whitewater kayaking safety knowledge is crucial in this often dangerous sport. There’s no doubt about it, and first descents are certainly near the top of the scary spectrum. This was one of the scariest moments of my life and I really hope to never have to deal with one like it again.

Watch the full video below