The Cowichan is the South Island’s bread and butter run. It’s fairly  free of major hazards, has fun play spots, and warm water (Cowichan supposedly means “the warm land” in Coast Salish). The Cowichan is runnable at almost 365 days of the year, due to a weir at Cowichan Lake managed by Catalyst Paper. During salmon runs (October to December), this section is great for wildlife viewing. I have been fortunate to see black bears, bald eagles, river otters, and stoats on this section.

The put in for this section is right below Skutz Falls. Skutz falls (pictured below), is an optional, 5-8 ft class 3+ drop that is great training for harder runs. Skutz makes the Cowichan an ideal run for groups of mixed skill levels, as more aggressive/advanced boaters can lap it, before setting out for the rest of the run with boaters that prefer a more relaxed pace.

Skutz Falls in the Sun 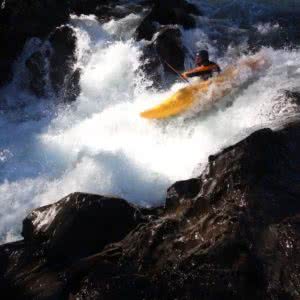 (*this is not what most of the Cowichan looks like)

After Skutz is a few km of alternating wave trains and floats with a few small surf waves mixed in. The next rapid is “S-bend”, a fairly straightforward S shaped section that has a play hole at super low water and surf waves at medium. Shortly downstream from S-bend is “Berny’s Negligee” (known as“Berny’s Hole” in more polite company). This is a right turn with two medium sized wave/holes in river middle, with a sneak route on the right.

Berny’s is followed by a bit of a float, then “Double Whammy”. Whammy can be recognized by a pedestrian bridge that spans high above the river 100m upstream. Whammy is a fun class 3 rapid, with a pointed rock river center that can be avoided on the left. Whammy ends with a large pool. Around the next bend from Whammy is “last drop”, an optional 3-5 ft drop that should be run close to the left bank, and can be scouted/portaged from the left as well. The main concern with last drop is the right channel, which has a head level rock at certain flows. This is easy to avoid by just staying river left. The take-out for the Cowichan is right at last drop.

The Nanaimo is probably the best play boating run on South Vancouver Island. It’s also more wide open than the other runs on this list, so it has a bit of a big water feel. The first half of this run consists of a series of straightforward but fun class III drops. These drops are all quite similar, the river bends and the outside of the bend has a hole, the middle is a wave train, and the inside is a sneakroute.

After about 5 of these, the next drop is called A-frame, named after the cabin in the woods on the right. This is slightly larger than its sibling drops, the river bends to the right and the outside (left) of the bend has two holes, the middle is a wave train, and the inside (right) is a sneak route. A-frame can be scouted/walked from the right bank. After A-frame is a float.

The float ends with a series of surf waves called “the ledges”. These range in size from playful cubs at low flows to crashing monsters at higher flows. This section lasts for about 500m.

The final rapid of the Nanaimo is called house rock. It can be skirted either left or right, the main hazard is a pillow wave up against a rock on the right. Watch out for wood getting stuck between the rock and the river bank. Scouting from river left is recommended.

Big Smiles on the Nanaimo 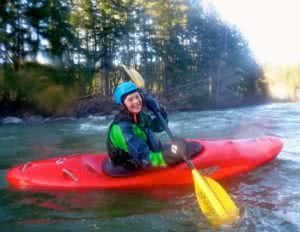 Copper Walls Above the Sieve Drop

Similar in character to the Upper Gordon, the Copper Canyon of the Chemanius River is a lively class 4 run about 1.5 hours north of Victoria. The Copper has a nice order of rapids, it starts out with a series of easy warm up rapids, then turns into a canyon which culminates in a rapid called powerhouse that involves sneaking left of a large boulder, then crashing through a burly hole. Then things calm down for a bit, allowing paddlers to rest and enjoy the breathtaking scenery.

After a short float, you reach sieve drop (pictured above). This is an optional, but quite fun rapid which can be portaged on the left to avoid the sieve on the right. After sieve drop the second canyon starts with a mandatory portage (walk around on the right). This portage is the limiting factor on running Copper at higher flows, as you would not want to miss the eddy and get swept into the boulder sieve.

The second canyon is slightly harder than the first, due to its continuous nature. This section culminates with “Must Run”, a boily, action packed class 4 section that finishes only about 15 meters above “the Flume”. The flume involves the entire river narrowing into a 1.5 meter wide slot. Running the flume is a rush, but can be walked on the right. After the flume, there is one more small drop, then a float to the take-out. At the takeout is a manky class 5- waterfall/slide you can hike up and run (pictured below):

The Slide at the Takeout 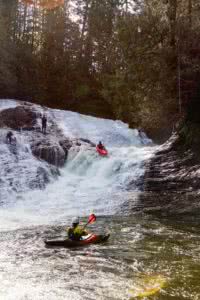 The Koksala Canyon is a lively, introductory creeking run with some of the most beautiful temperate rainforest scenery anywhere on Vancouver Island. The run starts right under the Kinsole Trestle, an old railway bridge that is now a bike/hiking trail. After a few km of boogie water, the river makes a hard left immediately after an island. This is the start of “Monastery Drop”, a series of three drops increasing in size from 5 to about 8 ft. These are all easily scouted from a trail on river right. The third drop is a bit messy, but good fun. 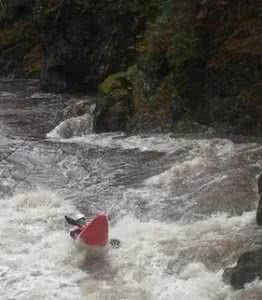 After this are a series of slightly easier, but still fun drops filled with boofing rocks. Then comes fish ladder, a IV+ drop with potential for uncomfortable consequences. Fortunately it is quite recognizable, due to a large square concrete structure in the center of the run, and also portage-able on a longer river right route or left via an eddy right above the drop. For those who choose to run it, the right side slide (recommended below 35 CMS) is a rush, although there is rumored to be rebar in it. At higher flows, the left channel creates a 15 ft sloping waterfall, although best to stay away from the right wall.

After fish ladder are a several more fun rapids, then a scenic float to the takeout.

Located between Lake Cowichan and Port Renfrew, the Gordon River is my favourite all-around river in the South Island. With sections ranging from class III+ to –V, it has something running for intermediate to advanced boaters at almost any water level. 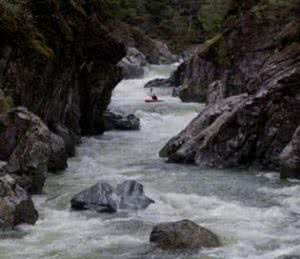 Site of the annual Gordon Creek Race in March, the Upper Gordon starts off with several class III warm-up rapids. Then it turns into a canyon with a trifecta of beautiful class IV 4-10 ft drops called triple drop (generally run left, left, right). After this is a bit of a flat section, followed by rowdy, pool drop, rapids called Airplane (right), Fake-Terminator (right), and Terminator (left), each of which has a decently sticky hole that pops up at certain water levels.

Bonus points for having one of the easiest put-in and take-out of any run on the island.

Water Level Info: Use the Harris Creek gauge. Also use the rock gauge under the bridge at the put-in, as Harris does not correlate 100% with the Gordon.

If just running the Upper Gordon doesn’t seem exciting enough for you, it is immediately followed by the middle. This is a class 4+/5- run, that starts off with a bang in the form of an exhilarating 15 ft waterfall called Entrance Falls that can be snuck on the right channel around the island or portaged on the left. Scout from the island in the middle. Next is a series of steep boulder gardens, be on the lookout for sieves. Highlights include the continuous un-portagable minefield (run center right), double drop (shimmy the far left, then boof), and “at-it-with-ease” (a fun 8-ft drop normally run center left). Two sections are normally portaged, portage falls and sieve drop, but the hike is easy. The run ends with almost as much excitement as it begins with, a 10-ft drop that flings you up and out into a pool called Exit Drop. Scout this from the island. The hike out of the take-out is a bit of a chore, so you can continue onto the lower Gordon for a comparatively relaxed paddle out.

Medium flows: class IV+/V- 2 to 5 CMS on the Harris Gauge, bottom bolt to half way between the bolts on the rock gauge.

The lower Gordon is a great adventure for intermediate paddlers, or alternatively a fun victory lap for those finishing a triple crown (upper-middle-lower Gordon). The run starts with a read and run boulder garden best run center, followed by a series of unnamed boofs. After this the run turns into a dramatic steep sided canyon. The biggest rapid of the run, bridge rapid, starts with boogie water, then ends with a ledge that is best run slightly center left as there is a moderate hole on the right. The canyon continues with two or three similar rapids.

Go with a local unless you really know what you’re doing. If you have to ask if this applies to you, you probably need a guide.

South Vancouver Island runs generally come in with winter rains. They are often cold, and can flash flood, after which there may be new logs in rapids. Checking for wood is more of a concern here than in other parts of the world.

Graham Litman is a third year student at the University of Victoria (UVic) and is President of the UVic Kayak Club. After completing his undergraduate degree at McGill he returned to his home town of Victoria to study law. When he isn’t studying, Graham can be found in his natural habitat: kayaking on one of British Columbia’s wild rivers or working as an initial attack forest fire-fighter during the summers. 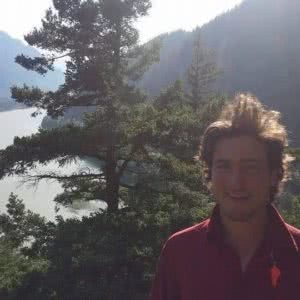