An interview with Ron Crown, the creator of Made Kayaks 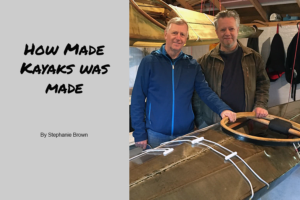 We love working in the outdoor adventure market. We love inspiring others to get out there and getting out there ourselves. We are grateful to those inventive minds that create the gear that helps us do our jobs and get out there ourselves. One of these inventive minds is Ron Crown, the creator of Made Kayak kits based on Galiano Island. Ron is helping people to build their own affordable and quality skin on frame kayaks. We asked Ron a few questions to better understand the man behind the idea.

Check out his answers below.

What made you want to design a kayak kit?

It was mostly an evolution; I wanted a kayak that I could afford so I built my own. I liked it so much I started building more, then I began teaching classes and realized I had such limited space in my personal shop that the next logical step was kits so people could build in their own home.

I started a CNC router cutting company and once that was up and running creating multiple kayak kits quickly became possible which made the whole idea a reality.

What are some benefits of having a skin on frame kayak?

For me, it is the lightness of the boat. There is a certain amount of flexibility in the way they are constructed which makes skin on frame kayaks really nice to paddle. They are one of the easiest kayaks to build yourself, they don’t involve any toxic chemicals or sanding – plus they are beautiful. 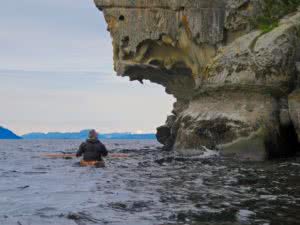 What kinds of steps go into designing a new kayak?

A lot of times it is just a guess at what works better or not. I start with a concept and then do a lot of research on traditional kayak shapes. Then I move to a 2D design on the computer that I can cut out on the CNC machine. Then it’s a process of piecing it out and making adjustments to make it better.

For the Squid, I built about 13 prototypes before the final. I am sure there are smarter and faster digital ways to design but for me having the tangible object to work with, gives the best final result.

The biggest part of designing the kit is figuring out how it assembles and how easy it is going to be for someone to put it together.

What sets Made Kayaks apart from other kayak kits?

There is no other kit like this on the market. There are a few companies that sell the cross-sections, they may sell the bow and stern plates but as a full kit, with all the pieces, there isn’t really anything else like this on the market. I wanted it to be as simple as getting the box and building the kayak, so that when you are done you can go out and paddle, you don’t need to source any other pieces on your own.

As well, because I use a CNC machine for the parts everything fits together without needing measurement making assembly very easy. 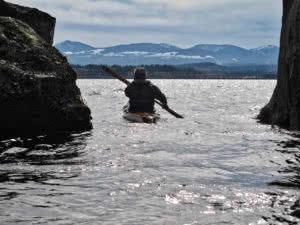 Ron Crown paddling with one of his paddles and boats. Photo by Bruce Holland

What can we expect to see coming from Made Kayaks in the future?

I’m just finishing up instructions for the newest kit of a 16′ kayak. After that, I am going to be focusing on some Greenland paddles. I am looking to create a Greenland paddle kit as an addition to the kayak kits. After that I would like to focus on a rolling kayak; one that is more dedicated to that activity.

What has been the most difficult thing in the design and production of your boats?

Nothing is really difficult some things just take longer to figure out than others. It is more about time than difficulty.

What is more difficult is not so much associated with the kayak kits as with skin boats in general. It is a difficult thing to educate people about skin boats. Getting people past the idea that they are fragile and need to be treated delicately and showing people how durable they can be has been difficult at times. There is a misconception about the durability of a skin on frame kayak – they are very strong. 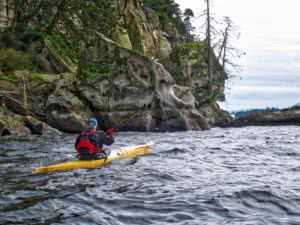 Why would someone want a skin on frame kayak like this over a rotomolded, Kevlar or other such kayaks?

That is such a personal question. If people have a lot of experience you know that each one has its own qualities. I like the traditional look of the skin on frame and the durability and lightness of them. I can hit my kayak with a hammer and never worry about it. The benefit of the kit is also being able to build your own boat. It gives you the satisfaction of looking and paddling something that you made yourself.

It is not that one is better than the other it is more that each kayak has its own unique features. A 30 lb skin kayak might not go faster than a 60 lb plastic one but it takes half the amount of energy to move it and the lightness makes it more responsive to maneuvering.

When did you get into kayaking?

I grew up in Ontario and did a lot of Canoeing. I  don’t think I had ever even seen a kayak until I moved to BC about 25 years ago. I remember seeing one and thinking “wow, that’s awesome”. I rented them whenever I could while I lived on the mainland.

When I moved to Gabriola, about 11 years ago, that is when I finally had the space to own one myself and I got into skin on frame designs shortly after. 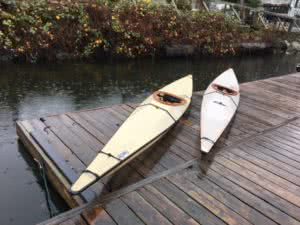 Made kayak Kits on the Ocean River docks.

To Shop a Made Kayak Kayak Kit check out their online store page with Ocean River. The adult size is coming to stores in 2018 but you can pre-order your adult-sized kit now.

2 Responses to “How Made Kayaks was Made”