The history of the kayak is closely interwoven with Canadian history itself. Modern kayaks are used to get up close and personal with the natural beauty and wildlife found all across Canada, but, kayaks have played a large role in the discovery of the land as well. As Canada 150 approaches many are looking back on the 150 years that have made Canada what it is today. There are parts of Canadian history that stretch back farther than 150 years and, in fact, there are parts of Canada’s history that take place well outside of Canada.

Paddle sports have played a vital role in the development of Canada as a country. From the discovery of topographical aspects of the land as well as the fur trade and the use of boats to deliver product to ports. Currently, paddle sports serve as a favourite Canadian pass time, hobby and sport.

The kayak has a history that stretches back around 4000 years to the common understanding. Archaeological evidence suggests 2000 years of history, but oral tradition proposes a history dating much farther.

The oldest known kayak was a display in the State Museum of Ethnology in Munich, Germany. This kayak was believed to have arrived in Holland in 1577. But the history of the kayak, or the qajaq, reaches much farther than the shores of Holland in 1577.

Umiaks are much larger open vessels that were used for transport of goods and families. Umiak, meaning “open skin boat” in Inuktitut, are dated back to 1000CE. Qajaq means “Hunter’s boat” or “man’s boat” and the construction on these paddle craft illustrates that its sole purpose was to provide manoeuvrability to a hunter. 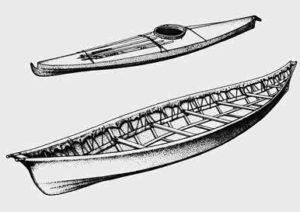 Kayak’s, or qajaq’s, were used mainly for hunting caribou, seal, whales and other marine mammals. These boats were used and mastered by the Inuit and Aleut peoples of North America but there is speculation that their origin was farther back to the Siberian peoples that crossed over to what is now considered North America.

The 1800’s saw the kayak finding it’s way to Europe and being adopted into German and French society as a sport and form of fitness. After hundreds of years, being honed into the finely tuned hunting machine that the kayak had become for many cultures, there was suddenly a rapid change and development in the kayaking world.

1930 saw Adolf Anderle down the Salzachofen Gorge. Making him the first known person to experiment with whitewater paddling. The International Scale of River Difficulty was soon after established and it is this moment in history that is believed to be the birthplace of modern whitewater kayaking.

Jump ahead to 1936 where kayaking became an Olympic sport in the Berlin Summer Games. Although Canada did get a medal in paddling sports at this games it was not until a number of summer games later that Canada received a medal in a kayak specific event. After appearing on a global scale at the Olympics kayaking became far more popular in America and women began to get involved in the sport as well. 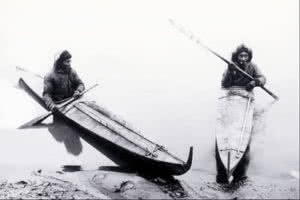 While George Dyson was bringing the romance of the original construction methods back into kayaking polyethylene kayaks were taking over throughout the 1980’s after first coming on the scene in 1973.

As with most historical records of modern-day activities, it appears to have started off slowly, but now we have the encyclopedia and archive databases for every paddle sports competition and technological advancement that has happened in recent history. What truly makes kayaking stand out, however, is that from the very beginning the Aleut and Inuit peoples showed extreme engineering genius. A testament to their creative skill is that, on the whole, the shape and construction of the traditional kayak are still largely intact.

With such a rich history, as well as the close encounters with nature that kayaking provides, it’s no wonder that kayaking in Canada should be the top of everyone’s list when visiting Canada.

So what are you waiting for? Take a Kayaking Adventure.

One response to “The History of The Kayak”