Still not a done deal.  That’s the mantra that paddlers, rowers and SUP boarders have to keep in mind when one reads the forward looking pronouncements from the people who want to block  the north side of the Victoria Harbour alongside the Songhees Walkway with large yachts.   For those who don’t paddle in Victoria Harbour, the proposed “Mega Yacht” Marina plans to build over the human powered zone that is used by locals and tourists to safely travel between the Inner and Upper Harbour and the Strait of Juan de Fuca as they share the Harbour waters with power boats, ships, fishing vessels, tug and tows and other human powered vessels that range from paddle boards, sea kayaks, surf skis, open water rowboats, solo outriggers, dragon boats and crewed outrigger.  Yes, human powered vessels from about 10′ to 45′ in length, not just kayaks.

But, you say, how can they do that? Easy, the Promoter convinced the BC Government that it was in the public interest to lease off a large Water lot for the construction of a floating breakwater and 30 slips between the  Victoria Harbour Airport and the Westsong Walkway. Some of you may recall that you signed a petition along with 7000 others to say that this was a bad idea. These voices were presented but given little value. The deal that BC struck with the Promoter included putting in a “kayaker’s corridor”.  However, the BC Government isn’t in charge of  the design of the corridor.   Marine navigation issues and concerns, including location, width and safety of the paddling corridor, fall within the jurisdiction of Transport Canada.

Eventually Transport Canada accepted the developer’s proposal to mitigate the “substantial interference to navigation” i.e., assuming that it was in the public interest to “stable” yachts in the human powered vessel transit zone by approving a “kayaker’s tunnel” under the two buildings.  We continue to be unheard on this one. Recently, the new Minister of Transport wrote to an acquaintance of his who questioned the decision of his predecessor to say:

The Victoria International Marina project underwent a comprehensive navigation review, including public and directed stakeholder consultation when it was first approved in 2012.  Transport Canada approved alterations to the original design in July of 2015 after the review determined that those alterations did not change the impact of the project on navigation and improved the usability of the paddling corridor.

How can one improve on a paddling corridor when right now, the human powered users in Victoria Harbour have a protected zone that will be replaced with a “tunnel” under two buildings?

What you can do

Take the advice of the BC Assistant Deputy Minister for Crown Lands Management who claims that the BC Government met its public interest mandate by requiring a paddling corridor. Write to Transport Canada and sign the petition.

Ask why there is only a one lane passage?

Why is it that Transport Canada accepted the Promoter’s design that makes human powered vessels paddle under two buildings.

Why is it acceptable for the large human powered vessels in the Harbour to have a one way tunnel? Do the arithmetic.. How does a 17 ft open water rowboat which needs 18 ft. width under power pass a 45′ long Outrigger that need 10 ft width in a 26 ft space under two buildings? One has to back out!

How does that respect the public interest when the Minister has approved the “substantial interference to navigation” mitigated on the basis of a 20 ft kayak but caused by the “Mega-Yacht” marina?

Time to tell decision makers that paddlers, rowers and SUP boarders want to keep the safety of the human powered zone in Victoria BC. Victoria International Marina and 30 yachts moored in the path that we share with other mariners is not in the public interest.

Want to share your concerns? Below are some useful contacts. 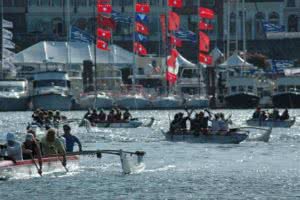 Get on our List
For Email Newsletters you can trust.