When it comes to winter paddling the options are endless, but one thing stands out about winter better than any other season: rough water paddling.

Winter Paddling is not for the faint of heart. The water is colder and there is often more of it, which means a lot of movement to navigate. For those adventurers who don’t want to stick to paddling in the confines of calm water or warm months, this season offers a range of exciting experiences just waiting to be had.

Winter paddling can be broken out into two categories with unique styles within each: Ocean Play and River Play.

When we say river play we are referring to paddling conditions on creeks and rivers, often referred to as white water. This water brings with it a variety of features to paddle that are caused by the topography and the gradient of the river bed, the rocks and obstacles of the river, the size of the waterway and the water level. The features of a river change drastically based on the water level in the river or creek.

Within River play there are three main styles to choose from:

Playboating takes place on wider more open rivers and creeks with standing waves rather than vertical drops. This style of paddling is generally best suited for planing hull boats and offers a lot of opportunity for tricks and manoeuvres around the features of the water. An example of a great playboating river on Vancouver Island is the Puntledge River. 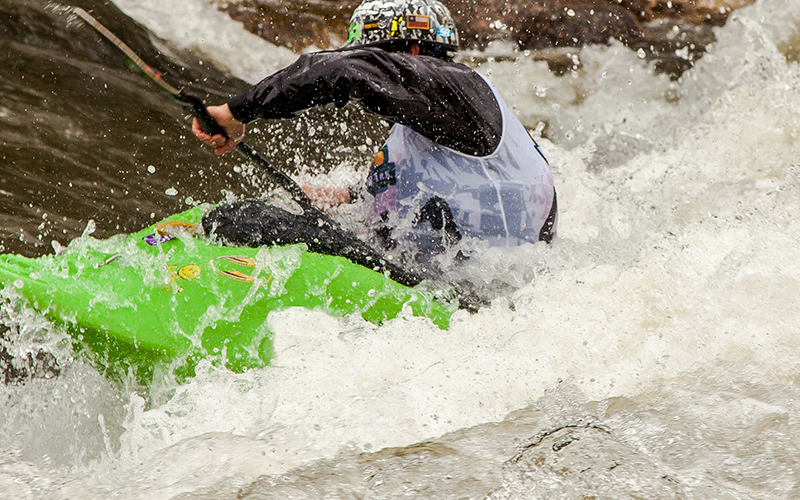 Creeking is a more advanced form of river paddling involving larger vertical drops with low-volume water. This form of paddling is best suited for a displacement hull boat. Some great examples on Vancouver Island of creeking paddling spots are the Gordon River and Koksilah River. 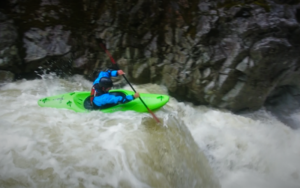 River running is a happy medium of creeking and playboating. River Running involves some vertical drops smaller in size then creeking runs as well as some fun water features for playboating. A River Running boat can be a combination of a playboat and a creeking boat or anything else suitable for the paddler. Examples of River Running rivers on Vancouver Island are the Nanaimo River and Cowichan River. 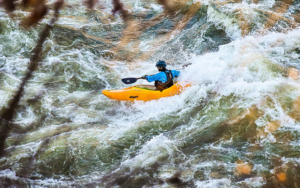 Many Ocean Play styles are not limited to just the winter months but with all that water in some of the areas they definitely pick up. When we refer to Ocean Play we are not talking about touring or your average sea kayaking expedition, we are talking about moving water that offers some serious opportunity to play around. Ocean play is best suited for a boat from 13 to 16 feet long and with a lot of rocker for manoeuvrability.

There are five main types of Ocean Play available to enjoy.

Shorebreak is what you think of when you think about surfing: waves breaking on a beach, aka the shore, or a reef. You are going to find a variety of paddlers here from surfers to stand up paddle boarders and everyone in between. Shorebreak is all about surfing the waves. Shorebreak boats need a lot of rocker and can be on the shorter end of the 13-16 foot spectrum. Great spots to check out shorebreak for some kayak surfing are Jordan River and Tofino on Vancouver Island. 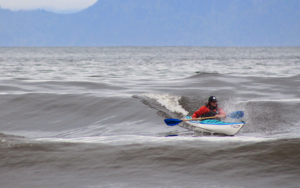 Rock gardening is kind of like the ocean’s version of whitewater. In this style, paddlers are surfing swells that are manoeuvring through rock channels and ocean-based obstacles. This kind of topography is pretty common along coastal regions and can be found relatively easily. A great location to find some rock gardening spots is the Port Renfrew area on the west coast of Vancouver Island.

Some tidal rapids have standing waves caused by movement of tidal current over the topography of the ocean floor. They are most prominent when there is a big range of difference between high and low tides. Some great tidal rapids around the Vancouver Island region are Tillicum Narrows, Skookumchuck Narrows, Okisollo Tidal Rapids, and Surge Narrows. Tide Races are caused when currents meet a constriction and are pushed through a narrowing at higher speeds, think of a garden hose with a spray nozzle. Tillicum Narrows in Victoria can be considered a bit of both a tidal Rapid and a Tide Race in that way. 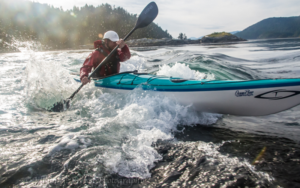 A Tidal Bore is caused when the ocean’s rising tide meets a river outflow at such a force that the river’s direction of flow is actually reversed and creates waves due to opposing movements of the water. The Shubenacadie River near the Bay of Fundy is an example of a Tidal Bore.

If you are looking to extend your paddling season, bring in some rough water experiences and expand on your skill set there are a lot of opportunities to get out there and enjoy some winter paddling – especially on Vancouver Island.