Kayaking from Kyuquot to Nootka Sound

One of my favourite Vancouver Island kayaking trips is from the tiny fishing village of Kyuquot, nestled in a protected harbour in Kyuquot Sound, down the coast to Friendly Cove (Yuquot) in Nootka Sound. What makes a destination like this so special is its remoteness.  What makes this trip particularly unique and special is using the Uchuck III to access and depart the coast.  This makes it a one way paddling trip with your vehicle left behind in Gold River. This has a three-fold advantage;  first, you eliminate a daunting two car shuttle, leaving one vehicle in Gold River and the other one in Fair Harbour, almost 5 hours away. Secondly, you avoid the long and not so interesting paddle up the inlet from Fair Harbour to Kyuquot and the very long run from Friendly Cove, up Muchalat Inlet, to Gold River.  Thirdly, you get to ride a very cool and historic coastal freighter on a working route through some incredible west coast scenery. 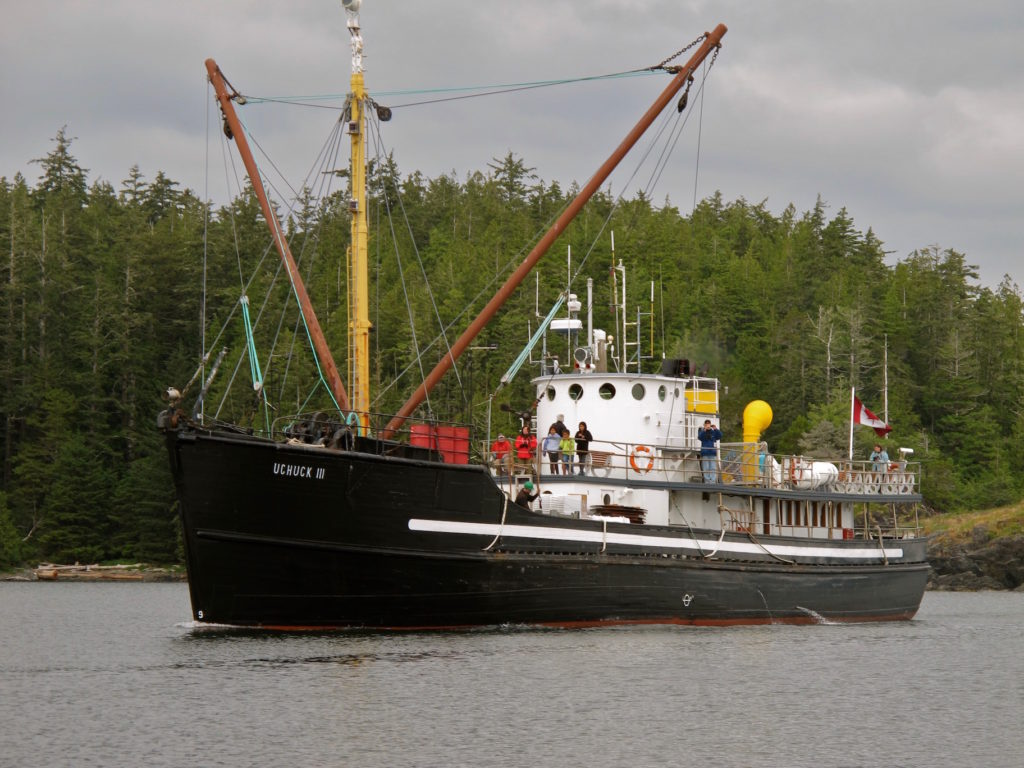 The Uchuck III is a World War II minesweeper built in 1942 and converted to a coastal freighter designed to accommodate 100 passengers and up to 100 tons of cargo. Her name comes from the West Coast First Nations Nootkan word for “healing waters” and has been serving the Vancouver Island for over 50 years. This historic vessel has been carefully reconditioned with a comfortable wood-finished lounge, coffee shop, and spacious seating on the open-air upper deck. Make sure to check out the bridge, but don’t touch the brass!  Stops are made along her route (as required) at fish farms, logging camps and settlements to deliver supplies and passengers or to drop off paddlers.  You get to see a working coastal freighter in action.  The Uchuck III is run by Get West Adventure Cruises.

One of the interesting things about Kyuquot Sound is it’s the area where sea otters were first reintroduced to the coast of Vancouver Island. Sea otters had completely disappeared from the coast from over hunting by European fur traders and native hunters in the late 18th and early 19th century.  Between 1969 and 1972 approximately 100 sea otters from the the Aleutians were brought into Checleset Bay as an experiment to see if their populations could be restored.  The project has been a great success as Sea Otter populations have rebounded up and down the coast. 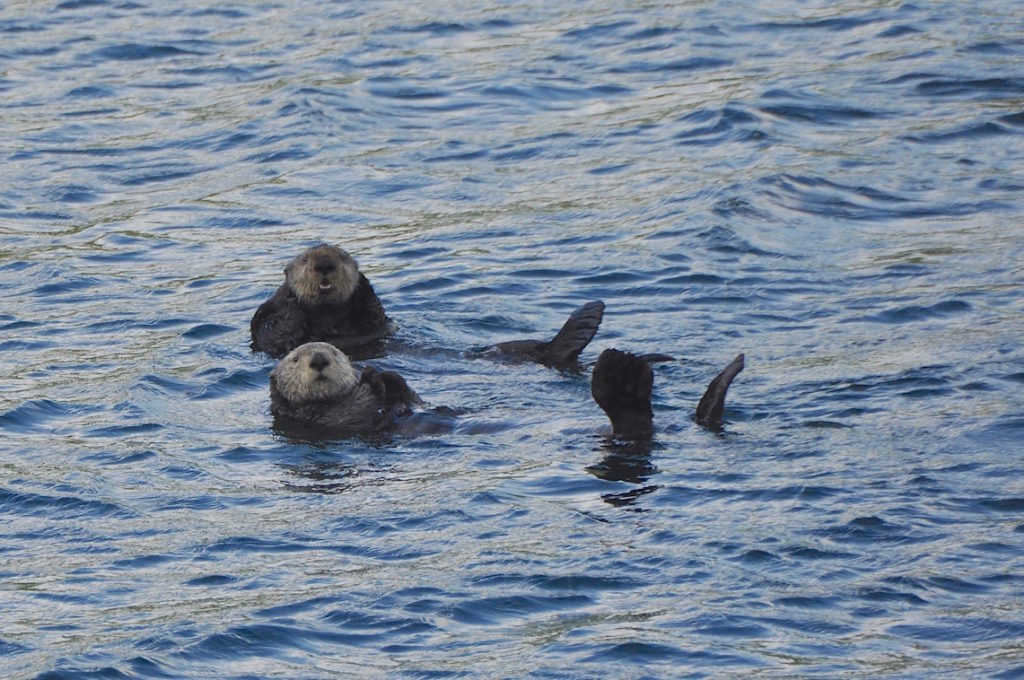 At the other end of the trip is Friendly Cove or Yuquot with a population of about 25 people.  In the past, as a summer home of Muchalat people, it housed approximately 1500 natives in 20 traditional longhouses. There is a lot of history in this part of Nootka Sound. This is where Captain James Cook became the first European to set foot on British Columbia soil in March of 1778. The only Spanish settlement ever established in Canada, was maintained near here between 1789 and 1795 and Bligh Island, the largest island in the sound, is named after the much maligned British Naval Captain who was here with Captain Cook in 1778.

Leaving Gold River at 7am in the morning, we tied up at the dock in the village of Kyuquot around 5 pm having made stops a a fish farm, a logging camp and to drop some fellow kayakers in Esperanza Inlet. Kyuquot is home to a population of around 300 First Nations people and others. While it was once primarily a fishing village, in recent years,  tourism has become a more viable alternative for many residents. Kyuquot has a bed and breakfast, a coffee shop, a motel and restaurant, a general store, a Red Cross medical clinic, phone service, boat charters and a water taxi service. 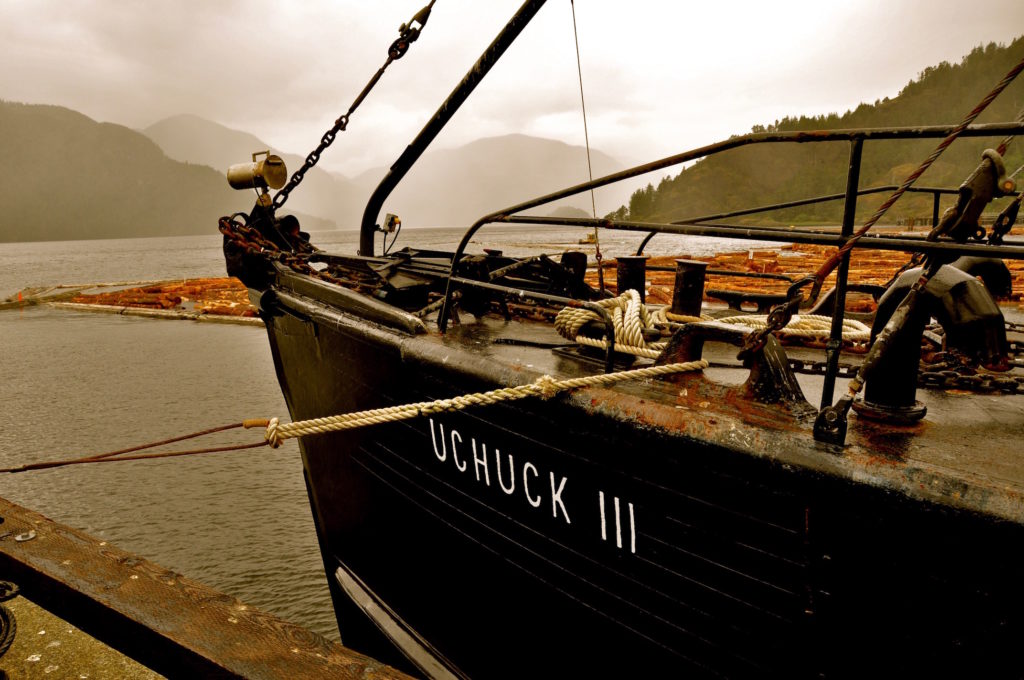 We were launched off the Uchuck directly into the water using the ships lifting platform which takes you, sitting in your fully loaded kayak ready to paddle, and winches you over the side where the platform sinks just below the surface and you just paddle away. Very cool! 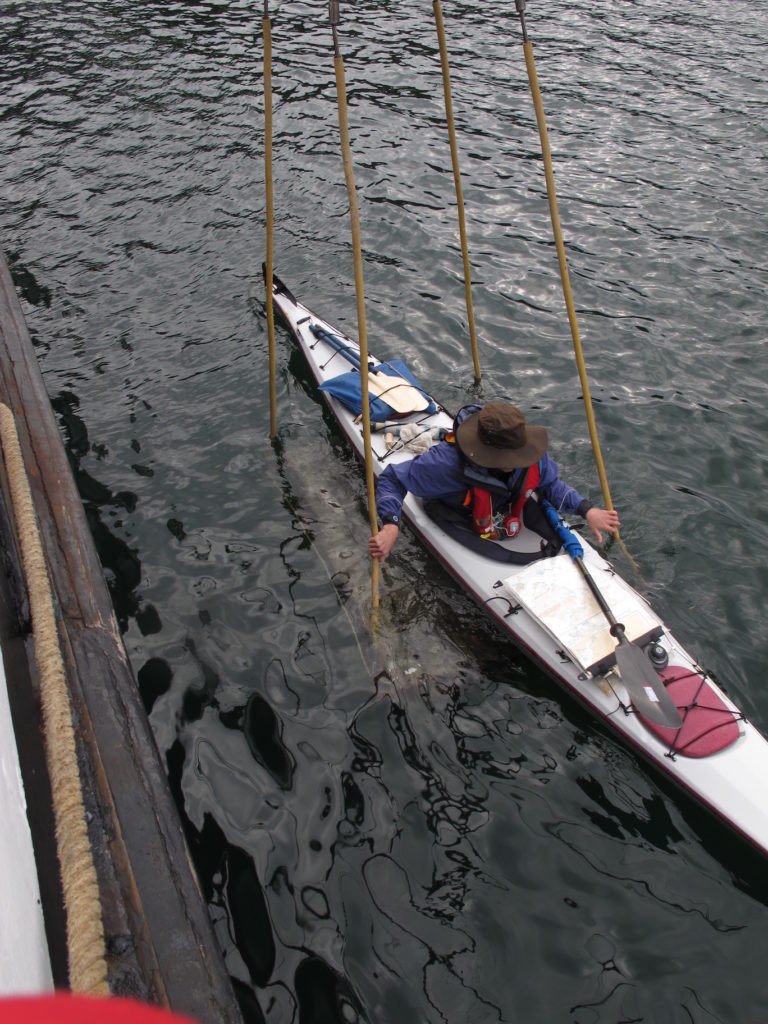 Wet Launch from the Uchuk in Kyuquot 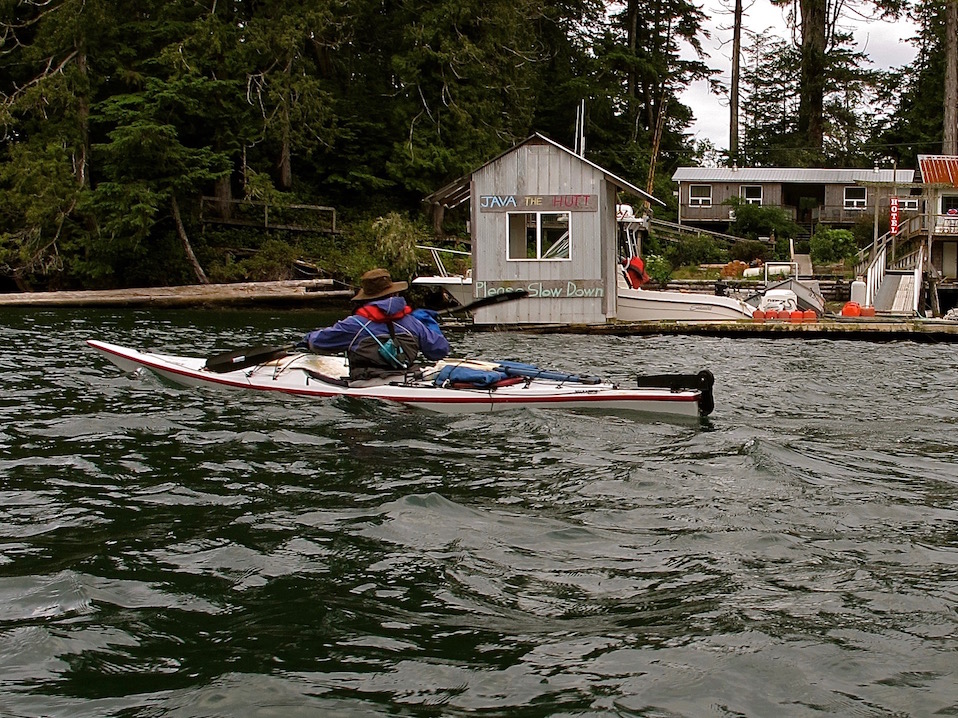 From Kyuquot we paddled the short stretch to Spring Island,  just off the coast, to spend a couple of days exploring Kyuquot Sound. Spring Island is a gorgeous place to set up camp and use as a base of operations to explore the area.  You can hike across the island to access some spectacular west coast vistas and explore an old WWII Radar Site still equipped with a basketball hoop and ball. 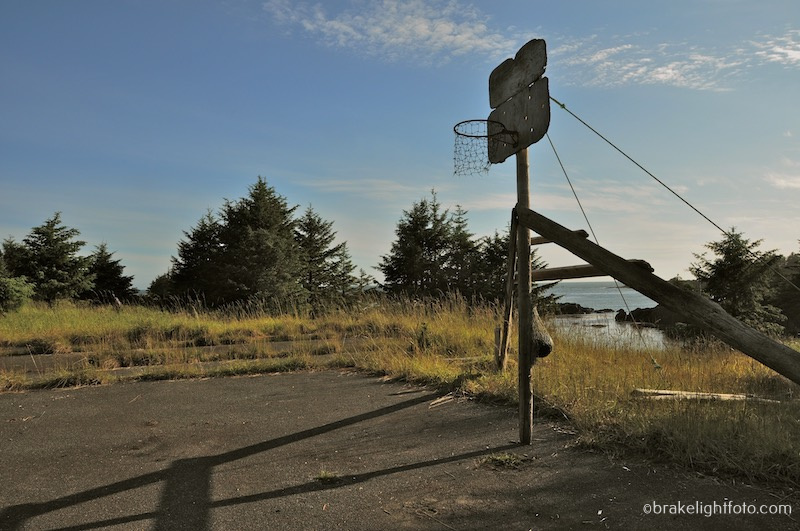 West Coast Expeditions, a kayak touring company owned by Dave Pinel, a past kayak instructor/guide and long time friend of Ocean River Sports,  has their base camp on Spring Island. If you are not up to planning your own trip to this spectacular part of the coast you might want to give them a call and check out some of their excellent tours.  You can still ride the Uchuck to Kyuquot and have them pick you up there. You can get more information by visiting their website:  West Coast Expeditions. 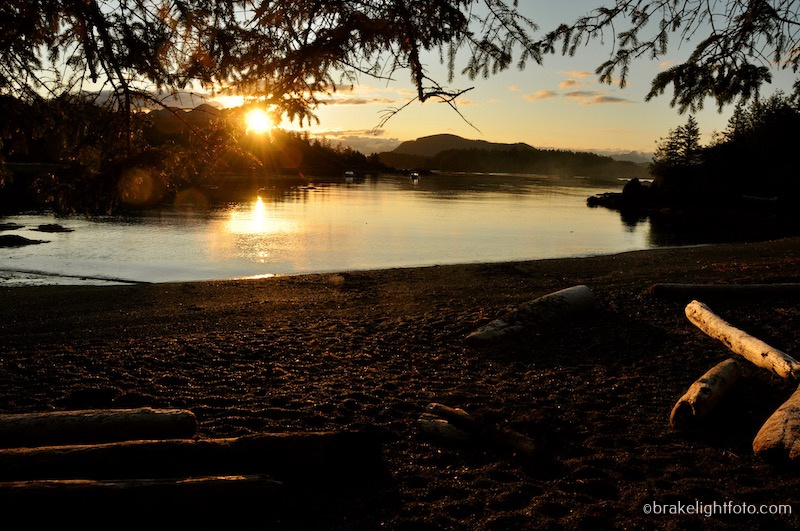 Leaving Spring Island we headed SE across the sound towards Rugged Point, a Provincial Marine Park and a great place to camp and explore with long sandy beaches and rocky headlands. You have a choice of camping on the north side of the point within Kyuquot Sound, which is a sheltered beach with protection from the west coast swell. Alternatively, if conditions are good you can choose to land on the exposed west coast beach.  There are trails over and around the points making for some good exploration. 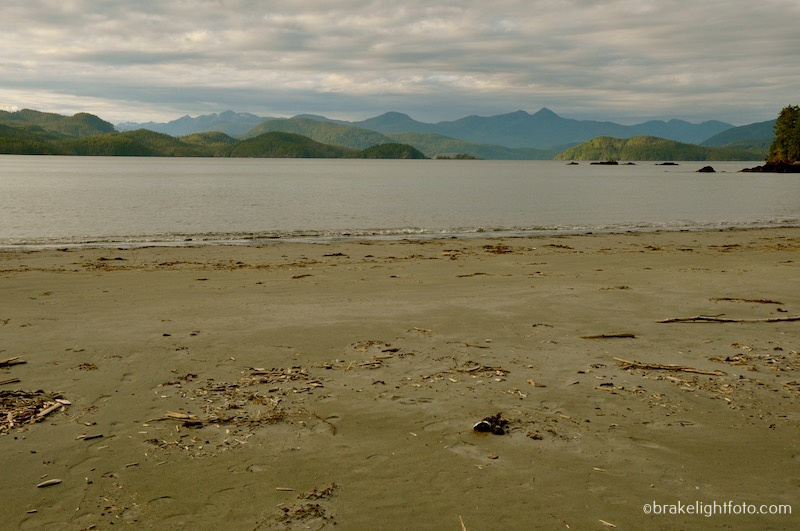 Moving down the coast we found ourselves at the entrance to Esperanza Inlet and found a nice gravel pocket beach just past Tatchu Pt. From here we crossed passed Catala Island Provincial Marine Park, which does have a couple of campsites, and paddled into the Nuschatlitz Provincial Park. This picturesque park encompasses the northwest tip of Nootka Island and a large number of small island groups.  The choice of exposed coast and protected paddling in and around the multitude of  quiet coves and beaches has made the Nutchalitz a popular destination for kayakers and canoeists. The Uchuck III drops paddlers off at a dock in a bay just south of Centre Island. 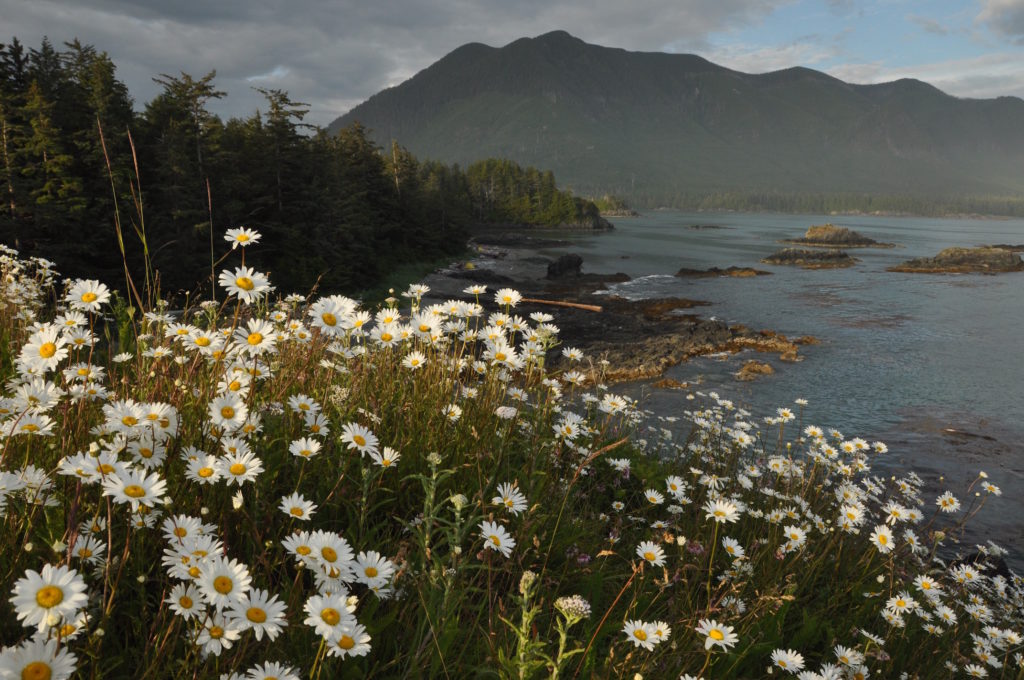 There is lots of exploring to be done in Nuchatlitz inlet. Working our way along the cliffs of Nootka Island towards Benson Pt we passed a waterfall dropping right into the ocean.  There is a very large camping area at Benson Pt. We continued along into Mary Basin watching a large sea lion fishing for salmon. Just past Narrows Island there is a tidal rapid which required a little caution and planning on our part so we could get back out of Inner Basin., after a short lunch break. 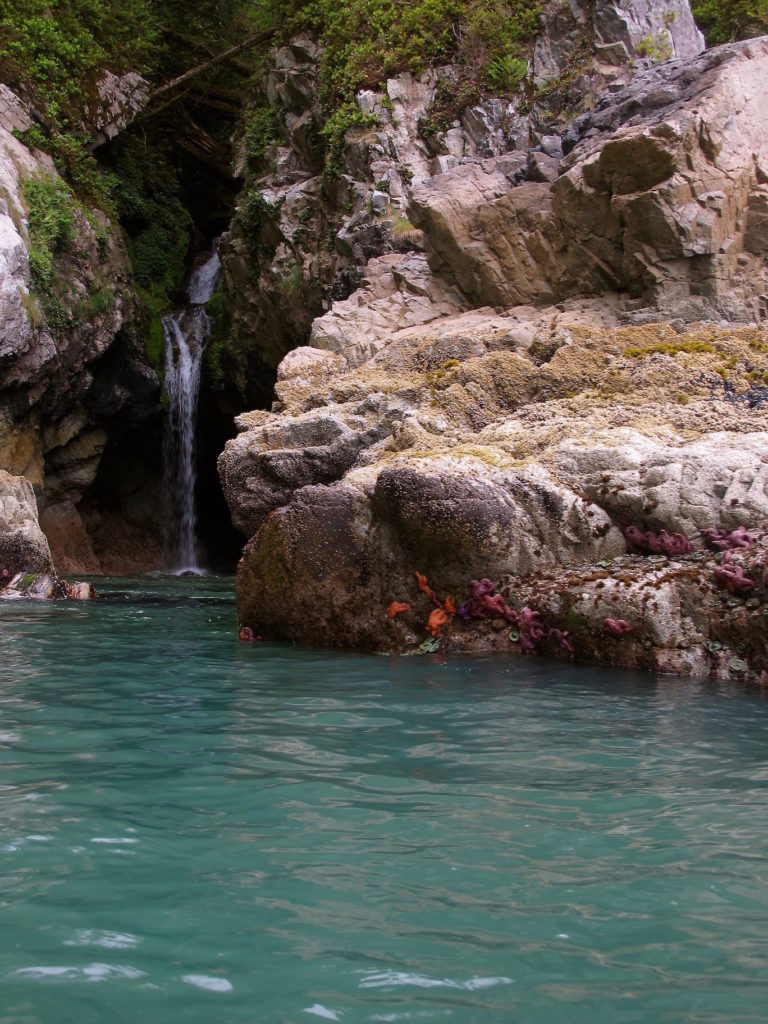 Across the inlet is Louie Bay, and just Inside of Tongue Pt you can still see the remains of shipwreck. The ship was partially salvaged which explains is why there are so many large broken pieces scattered along the beach. If the tides are right you can paddle up the lagoon to the starting point of the Nootka Trail. Charter seaplanes land in the lagoon to drop off hikers wanting to challenge the rugged 40 km, 5 days or so hike to Friendly Cove . It is well worth taking the short hike over to Third Beach for a taste of what hiking this trail is all about. Third beach is the traditional first night’s camp for hikers and the most developed campsite along Nootka Island. We would eventually paddle into this bay to camp and then spend another day waiting for the weather to improve.  During the night we were visited by some wolves who left their footprints in the sand outside our tents. 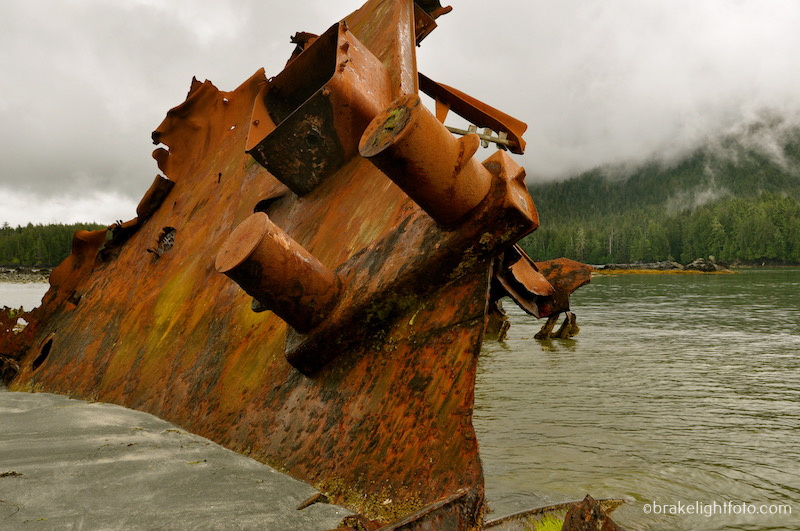 The waters on the outside of Nootka Island can be intimidating. There are lots of shallow reefs creating breakers well off shore. Our next destination was Calvin Falls, which is nestled at the back of a very large bay surrounded by sandy beaches, lots of sandy beaches, beaches big enough to land airplanes on. This actually happened.  A small Cessna came in and landed while we were there. Calvin Falls is a scenic highlight of the trip pouring over a wide rocky ledge into a channel carved in the beach. 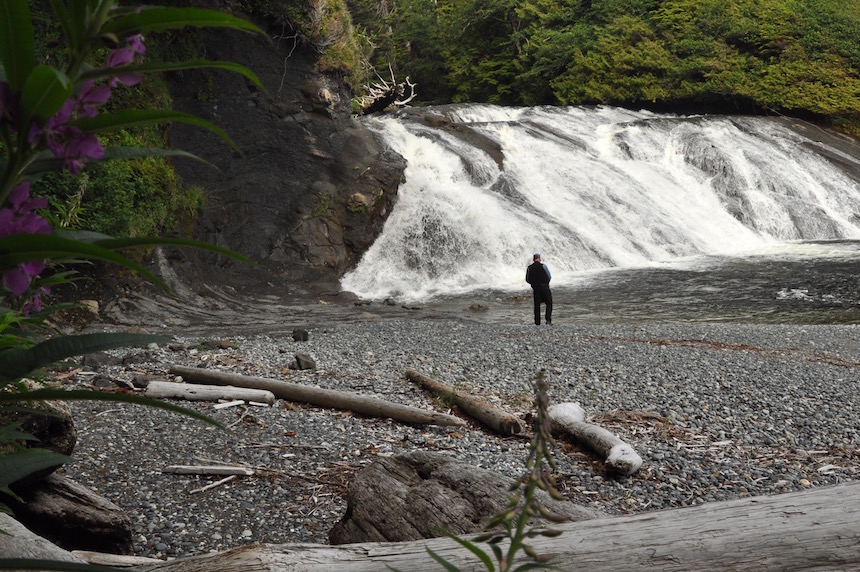 We set off on a beautiful calm sunny morning for Maquinna Pt, at the southwest tip of Nootka Island. This is a particularly rugged and spectacular section of the coast with rocky cliffs, sea caves, an arch and pocket beaches. Conflicting currents around Maquinna Pt created some interesting water conditions, but without any wind, not so bad. 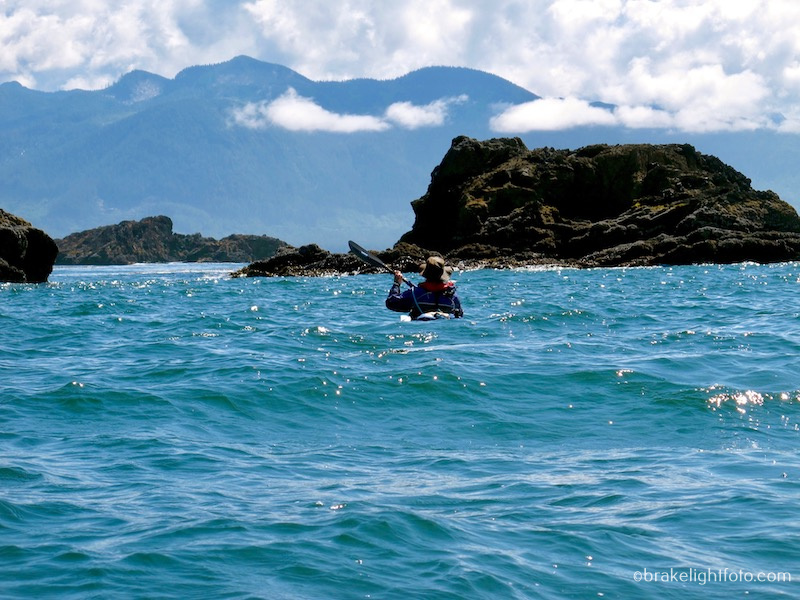 There is a good campsite about halfway between Maquinna Pt and Yuquot (Friendly Cove). From here I highly recommend you hike back along the Nootka trail there are some spectacular viewpoints and some sea caves and sea arches to explore. We also hiked the other way toward Yuquot and had opportunity of watching some hikers fiord the outlet stream of the tidal lagoon here. The Nootka trail is certainly not for the faint hearted! 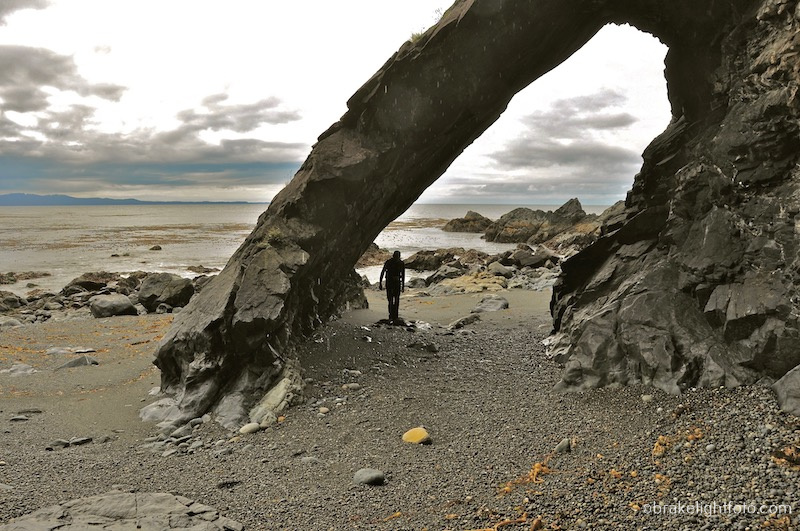 Because of deteriorating weather and not wanting to spend the next few days huddled under a tarp in the rain, we opted to catch an earlier boat than we originally planned leaving from Friendly Cove. A quick VHF radio call to the keeper at the Friendly Cove Light Station confirmed that the Uchuck was coming in the next day, so after a breakfast and a leisurely paddle around the point at Friendly Cove we settled back on the dock to wait for the Uchuck. While waiting we were entertained by bald eagles snatching fish scraps from the water. 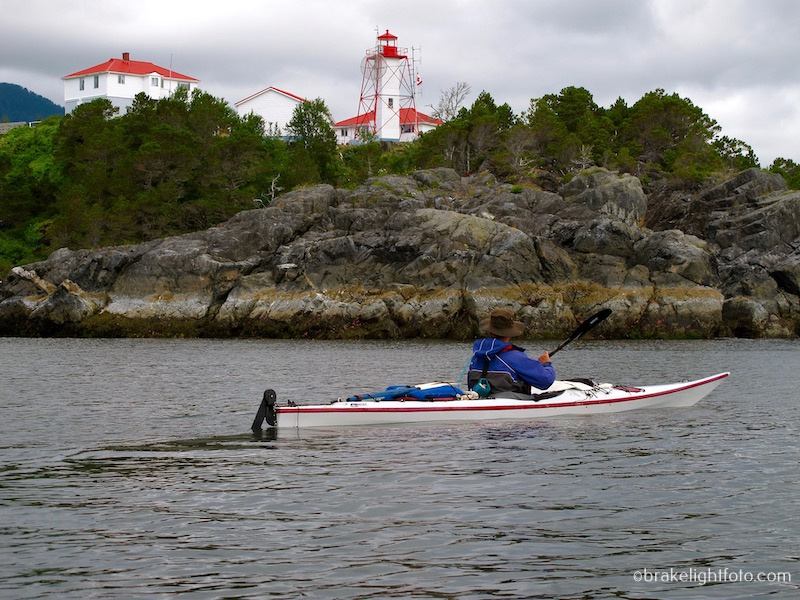 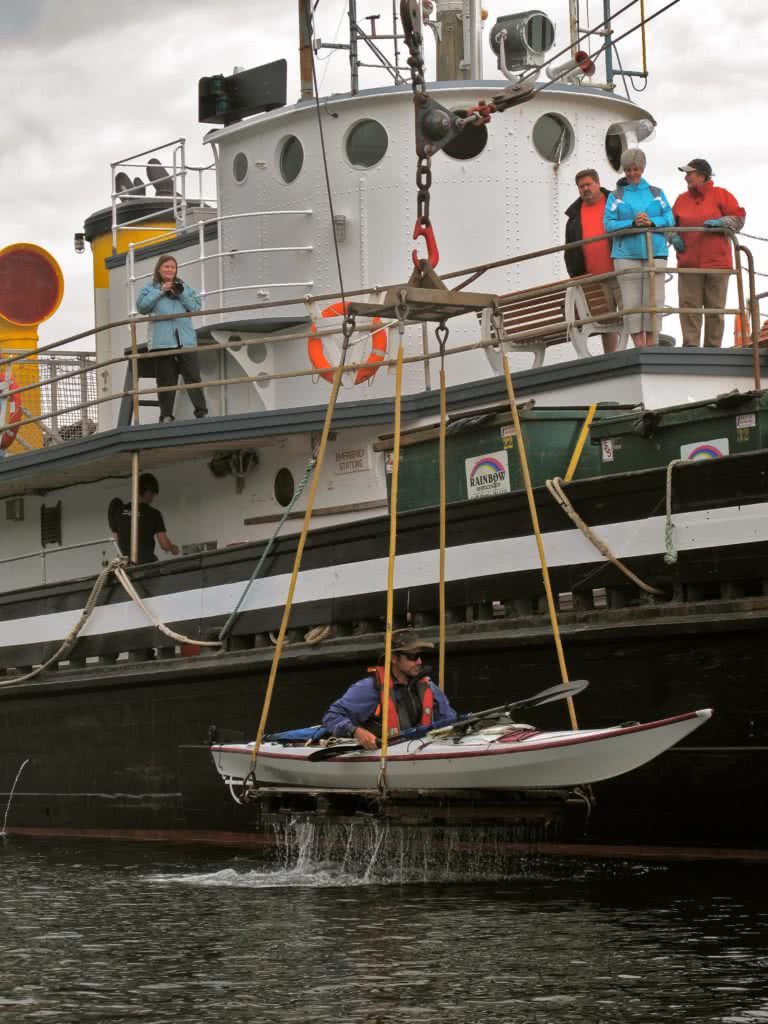 After a successful loading onto the Uchuck, complete with an audience, the ride up the Muchalat Channel on the Uchuck III was relatively uneventful with one stop to unload feed at a fish farm.  As we docked in Gold River, we saw the only black bear of the trip running across the docks as we approached.  Turning around, we could see the dark skies and rain following us up the inlet. 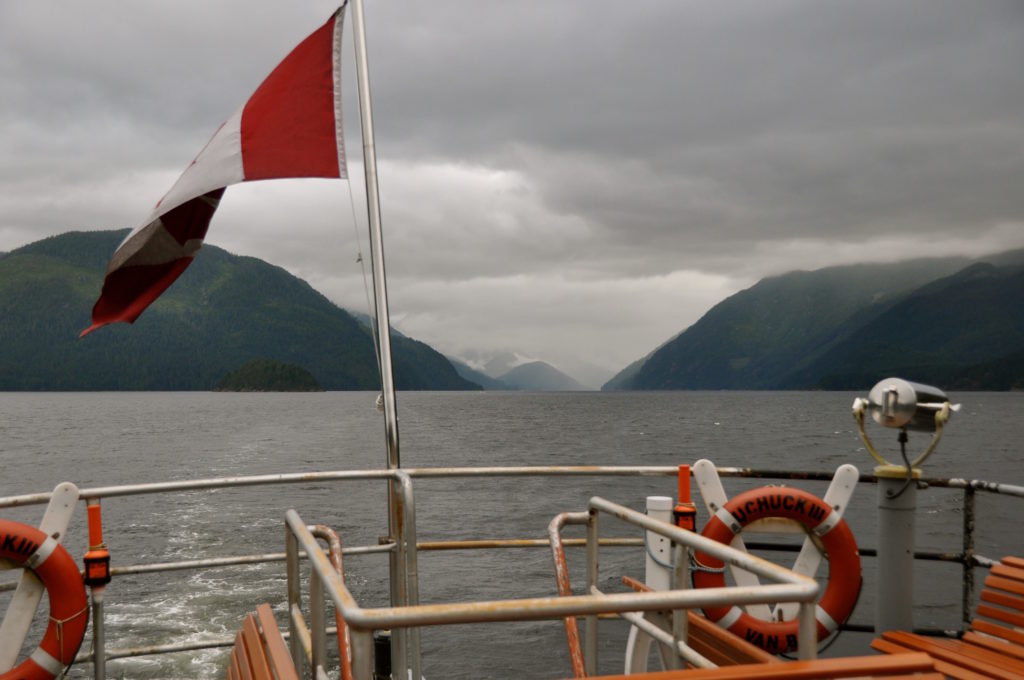 Weather following us up Muchalat Inlet

Bruce Holland – You can also catch me at  Ourhomehas6wheels.com or  Brakelightfoto.com