Paddlers share the waters of BC with a number of amazing creatures, sharks are one seldom spoken about. These majestic creatures live in the waters we all enjoy as kayakers, canoers and paddleboarders.

Sharks in BC may seem like a non-existent entity but they do exist, and in quite the variety. When many people think ‘sharks’ they think dark ominous figures gliding towards them in the deep, or perhaps those majestic leaps out of the water where their jaws are open and taking a seal from the sea. In reality, sharks range from small catlike creatures all the way up to the monstrous figures depicted in movies. Regardless of what species, all marine life deserve our respect and it is our responsibility as paddlers to be the voice for these creatures that we share our paddling environments with. Below is a list of sharks in the waters off the coast of BC, and although it is very rare for a paddler to ever come in contact with a shark, it is interesting to know what lives in the waters we explore. 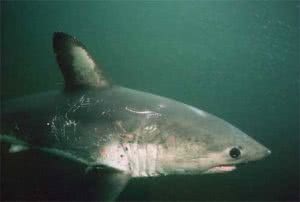 Salmon Sharks reside in the northern end of the Island but are more prevalent around Haida Gwaii. These sharks mainly feed on bony fish and salmon species but can seem scary due to their small great white appearance. The salmon shark can grow up to 10 feet in length and resides in the water level between the surface and 375 meters farther out to sea.

A pelagic and demersal shark, the brown cat shark is a small, up to 2.2 feet long, species that live in deeper water away from shore and close to the bottom.

Resides in the surface waters and can grow up to 10 feet in length. These are very curious sharks with an inquisitive nature; this is most likely what earned them the nickname “blue dogs” for their puppy-like behaviour. These sharks feed mostly on schools of fish and even squid or carcases of whales. They live in open water away from shore.

This slow moving deep water shark lives close to the bottom of the sea for most of its life and is considered a bottom feeder.

The Tope can grow to lengths of 6.5 feet and is currently listed as a species of concern on the Species at Risk Act due to overfishing. They have a relatively slow maturation process and produce smaller numbers of young making it harder for their numbers to rebound. They prefer to reside in open waters and feed on mainly small fish, crustaceans and other small prey.

This small deep water shark can grow to 5 feet in length and is known for its flat slate grey colouring. They are a slow growing shark with sexual maturity being around 20 years. They are part of a fisheries export but rarely consumed in North America. Thought of as a pest by fishermen they are often treated with very little respect. 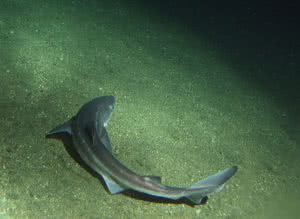 A deeper water shark the Sixgill can grow to lengths of 16 feet.  This species is also listed as a special concern under the Species at Risk Act. The feeding habits of these sharks can vary from other sharks to seals, squid and bony fish. Although an attack on any human is extremely unlikely people should always remain respectful when in their environment – which is deep, and not really of concern to kayakers and paddleboarders. The Sixgill has seen a population boom around Hornby Island in 2014 due to a food source increase researchers believe.

Shark species rare in BC waters:

Can grow up to 5 feet in length with a flattened body and large pectoral fins. Researchers are finding their habits to be very unpredictable and they can be dangerous and often hunt in packs. They are very rare in BC waters and prefer deeper depths, however, and are of no real concern to paddlers.

One of the fastest sharks in the water the shortfin Mako can reach lengths of 13 feet and speeds of 44 miles per hour in short bursts. The Mako’s muscular structure is similar to the tuna which helps it in being so fast and able to keep up to this source of prey. This species prefers open waters.

The common thresher has a very long upper caudal fin or the top portion of the tail fin. They are very shy and very rare in BC waters and prefer open water environments from the surface down to 366 meters.

Photo from Fisheries and Oceans Canada

This species more resembles the appearance of a ray than a shark. They can grow in lengths of up to 5 feet and prefer to live on the bottom of the seabed from 3 to 183 meters.

This gentle giant was almost eradicated due to an effort by Canada’s Department of Fisheries and Oceans between 1955 and 1969 and the liver oil targeted killing from 1941 to 1947. These huge sharks live along the surface and are considered filter feeders. The second largest fish in the ocean is considered endangered and only a few sightings have been reported in the last few years in the waters off the coast of British Columbia. 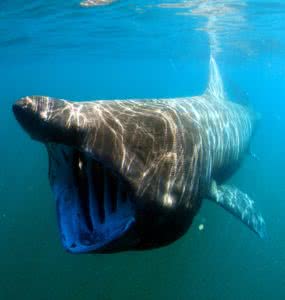 I know terrifying, but also extremely rare – like very, very rare. This can sometimes happen if they follow a warm stream of water into our surrounding waters and when it turns cold they can die or the leave.

If as a kayaker, canoer, or paddleboarder, you ever interact with a shark or spot one, give it lots of space and never approach, especially from behind or the front. For basking sharks report any sightings and if possible take photos. Remember, we are enjoying these creatures homes and we should respect them and despite any fear we should stand up for them as best we can if they are threatened or miss-treated.