Recently the inaugural Seventy48 race went down in Washington State. Created by the Race to Alaska crew, this race was solely for human-power craft only – no sailing allowed. Starting in Tacoma at 5:30 pm and ending in Port Townsend at the same time two days later the race was simple: Seventy miles that you needed to complete in under 48 hours for a chance at winning $11,400 in cash.

We chose to race a double surf ski, primarily because we are both kayakers. A surf ski is the fastest kind of open water kayak out there.

Leading up to the registration deadline in April it looked like there would be maybe 30 or 40 teams. Little did anyone expect that in the last two weeks of registration there would be such an influx that by race day there were 114 teams. One of these racers was Greg Barton, past Olympic gold medallist, founder of Epic Kayaks, and crusher of all surf ski races in the Pacific Northwest. Needless to say, our expectation of winning the race went down slightly after this addition. Still, we continued our training on separate sides of the country and prepared for our arrival in Tacoma hoping to have a good time, do our best, and feel as tired as possible after.

The race began in chaos with 114 boats funnelling through a waterway wide enough for about 5. It became very clear right away that there was a front pack consisting of two double surf skis, an OC6, and a double and a four-man rowing shell. We were cruising along in the second pack with a single and a double rowing shell feeling quite good.

A huge part of this race is the night-time factor. All the competitive teams knew they had to paddle straight through the night whereas some others took their time and camped along the way to rest their bodies. Paddling through the sunset knowing that you are not going to stop until you see the sun rise again is quite an interesting feeling. Graham and I have done overnight paddles before so we knew what we were getting ourselves into. 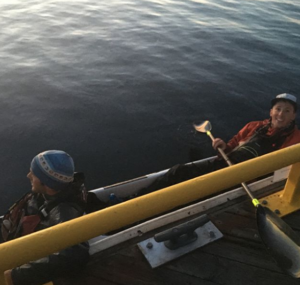 The sun set around 9 o’clock and it started to cool off right away. We had a quick 2-minute pit-stop to put on paddling jackets and stretch our butts, then we set off into the evening glow. There was no moon, but we did have a fairly good glow from Seattle for the majority of the night. We had plotted our route out onto our charts and written in bold the lights we had to shoot for to aid us in our navigation. When we would round a dark point, Graham would stop paddling for 20 seconds to turn his headlamp on, find the next light we needed to aim at, then relay the info to me in the front. Graham also had a GPS strapped to his thigh, so we could get a reference on how fast we were moving and be able to detect whether we were in current, a back eddy, or just darn tired.

It may seem surprising, but even with the physical exertion and company, it can be quite challenging to stay awake through the night. One of my talents in life is kayaking. Another is sleeping. When I try to kayak while I should be sleeping it can be troublesome. While crossing from Tobago to Grenada 4 years ago with Graham I did manage to combine the two skills for a brief 10 seconds or so, but I am far from mastering this. Staying awake in the Seventy48 was challenging but, thanks to a very talkative brother I managed to keep my eyes open this time.

The night really flew by and before we knew it a soft glow was starting in the east and we could begin to make out the difference between water and land a little better. We went through Port Townsend Canal around 3:30 am. and then had one last shot over to the many lights. We arrived at 4:40 am in the morning to a few hardcore race organizers, committed fans, and our parents. The sun had not yet risen, and we still hadn’t slept a wink, but coffee, doughnuts, and rather chatty people kept us up to cheer on a few more teams. Shortly after 6 o’clock, the sleep deprivation kicked in and we called it a night. 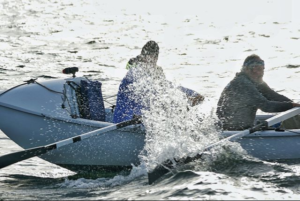 Overall, we finished the race in fifth place behind two double surf skis, an OC6 and a double rowing shell. Greg Barton and Kevin Olney won the race in their double surf ski arriving in Port Townsend at 3:10 am. The race was designed as a precursor race to the Race to Alaska so our after party was the R2AK’s send-off party. This made the atmosphere in Port Townsend quite phenomenal for those couple days while recovering. People were constantly wandering the streets around the marina and Maritime Centre chatting with racers, cheering constantly arriving Seventy48 teams in, looking at boats, and sharing stories.

All in all, I think the Seventy48 was a great addition to the Race to Alaska. I hope the word spread across the land that it’s here, and it is awesome!