Trans Canada Trail (TCT) and BC Marine Trails Network Association have come up with the perfect recipe for connecting Vancouver Island and the rest of Canada by trail: the Salish Sea Maine Trail.

The Salish Sea Marine Trail will be a blueway – a saltwater route designed for paddlecraft and small beachable boats – that will connect The Great Trail (the new name for the Trans Canada Trail) from Horseshoe Bay on the BC Mainland to Kilometre Zero of The Great Trail in Victoria. The actual location of where the trailhead will be located in Victoria is still up for location and the exact start point has yet to be decided on, although many sources are currently saying Clover Point.

The 257-kilometre marine trail will snake north from the starting point in Victoria along the Victoria coast and the Saanich Peninsula into the Gulf Islands, then north past Nanaimo through the Winchelsea and Ballenas islands across to Lasqueti and Texada Islands, then down the Sunshine Coast and across Howe Sound to end at Horseshoe Bay. 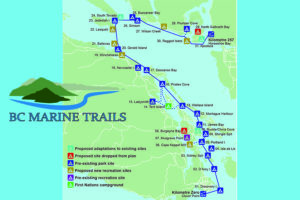 From there it will connect to the Sea to Sky Marine Trail to link to Squamish by water plus connect with The Great Trail land trails in Vancouver and the rest of Canada.

The Salish Sea Marine Trail will not only provide the link, it will create an incredible new paddling route in its own right, providing a human-powered connection spanning the Canadian side of the Salish Sea.

Spearheading the Salish Sea Marine Trail is the BC Marine Trails Network Association (BCMTNA), an affiliation of British Columbia’s kayaking and paddling clubs along with private members and business members. Formed in 2009, its mandate is to develop marine trails along the British Columbia coast through a network of access points and campsites developed in association with government agencies, First Nations and stakeholders.

Other partners involved in the Salish Sea Marine Trail include the Shaw Centre for the Salish Sea, which will provide the marine ecology interpretive component for the trail as it develops.

Currently, the project is looking for help from the public to make this trail happen and is hoping for $10,000 in public funding. The current amount that has been raised by the BCMTNA is $30,000 of the $55,000 needed for the first phase of the trail. A crowdfunding initiative has raised $1695 so far of the targeted $10,000 in public donations. If you would like to donate to the trail you can click here.  To learn more about the fundraising efforts for the Salish Sea Marine Trail, head over to the BCMTNA’s website.

The Salish Sea was adopted as a formal name in 2009 in both the US and Canada in recognition of the shared geographic and ecological traits of the major waterways of the Strait of Georgia, Puget Sound and the Strait of Juan de Fuca. The marine trail will provide the opportunity to celebrate not only the ecological and physical richness of the Salish Sea, but to reflect the heritage of the area by mirroring many of the traditional aboriginal paddling routes used for hunting, fishing and trading. The BCMTNA hopes to include a Coast Salish interpretive program in cooperation with Coast Salish communities to represent the traditional territories through which the trail will pass. 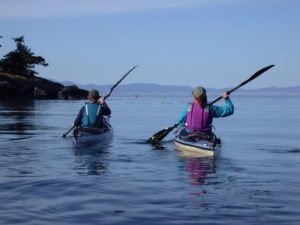 The Great Trail by Trans Canada Trail: It began as a bold dream in 1992: the idea of creating a trail that would be a gift from Canadians to Canadians. Since then, Trans Canada Trail – a not-for-profit organisation – has been working with donors, partners, governments and volunteers to create an epic trail of trails offering a wide range of outdoor experiences. True to its name, The Great Trail embodies Canada’s magnificent urban, rural and wilderness landscapes. Every Canadian province and territory is home to its own section of The Great Trail.

The BC Marine Trails Network Association: The BC Marine Trails Network Association (BCMTNA) is a BC-based registered non-profit society formed in 2009 and dedicated to the creation of a marine network of campsites and access points along the coastline of British Columbia. The BCMTNA is comprised of 11 paddling clubs from Vancouver Island, Salt Spring Island and the mainland of BC plus many individual and business members. Over the past several years, volunteers have logged thousands of hours performing site assessments, site inventories and cleanups, including campsite upgrades, along the British Columbia coast. 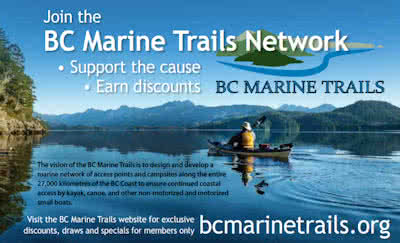 The Salish Sea: The name Salish Sea was officially adopted in 2009 in both the US and Canada to encompass the shared geographic and ecological traits of the major waterways of the Strait of Georgia, Puget Sound and the Strait of Juan de Fuca. The naming of these waterways as a sea embodies several ideals, a major one being to raise consciousness of the overall health and interconnectedness of the waters and ecosystems within the Salish Sea basin. The Salish Sea Marine Trail will augment that facet, providing an environmentally friendly marine route highlighting the natural coastal and marine features of this region. The route’s ecological richness is evident in the 253 species of fish that can be found in the Salish Sea, the many marine birds that live here and migrate through here, and the marine mammals including both resident and transient orca populations, sea lions, seals, otters and a variety of whale species that are returning in ever more frequent numbers every year.

The Coast Salish heritage: The Salish Sea Marine Trail name also encompasses the native heritage of the area, which is populated by the Coast Salish, the indigenous peoples of south-west British Columbia and north-west Washington who traditionally inhabited the shoreline of the Salish Sea and who share a common linguistic and cultural origin. The route will pass many former native village sites and entail many traditional-use beaches and significant cultural sites, and so mirror many earlier trade, hunting and fishing routes historically transited by water. In that way, it will provide a bridge between Coast Salish traditional use and today’s self-propelled explorers. Part of the trail project involves engaging the 15 Coast Salish communities with traditional territories within the Salish Sea Marine Trail route to contribute to a historic and cultural interpretive component for the trail. 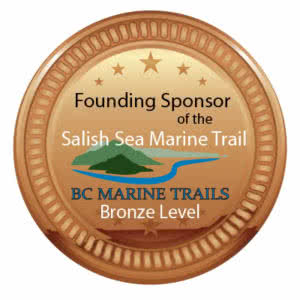