The Rudder Versus Skeg Debate, Is One System Better?

There has always been a debate surrounding rudders versus skegs, which is better?  Purests would argue that a well-designed kayak with a competent paddler shouldn’t need a rudder or maybe even a skeg. This may be so, but it certainly doesn’t address all of the issues. Each side has had their proponents and detractors, but as time has gone by I think even the hardest core have seen reason to compromise. In the end there really is no right or wrong answer, each paddler will have to make a decision based on need and personal preference.

In ideal conditions a well-designed sea kayak should track well, meaning it should run in a straight line without major paddle corrections, but it should also be able to be turned easily with the use of good turning strokes. Good tracking and good turning ability in kayak design is a compromise, trading one for the other. A good paddler can edge or lean the kayak on its side taking advantage of the increased rocker to improve the kayaks ability to turn. 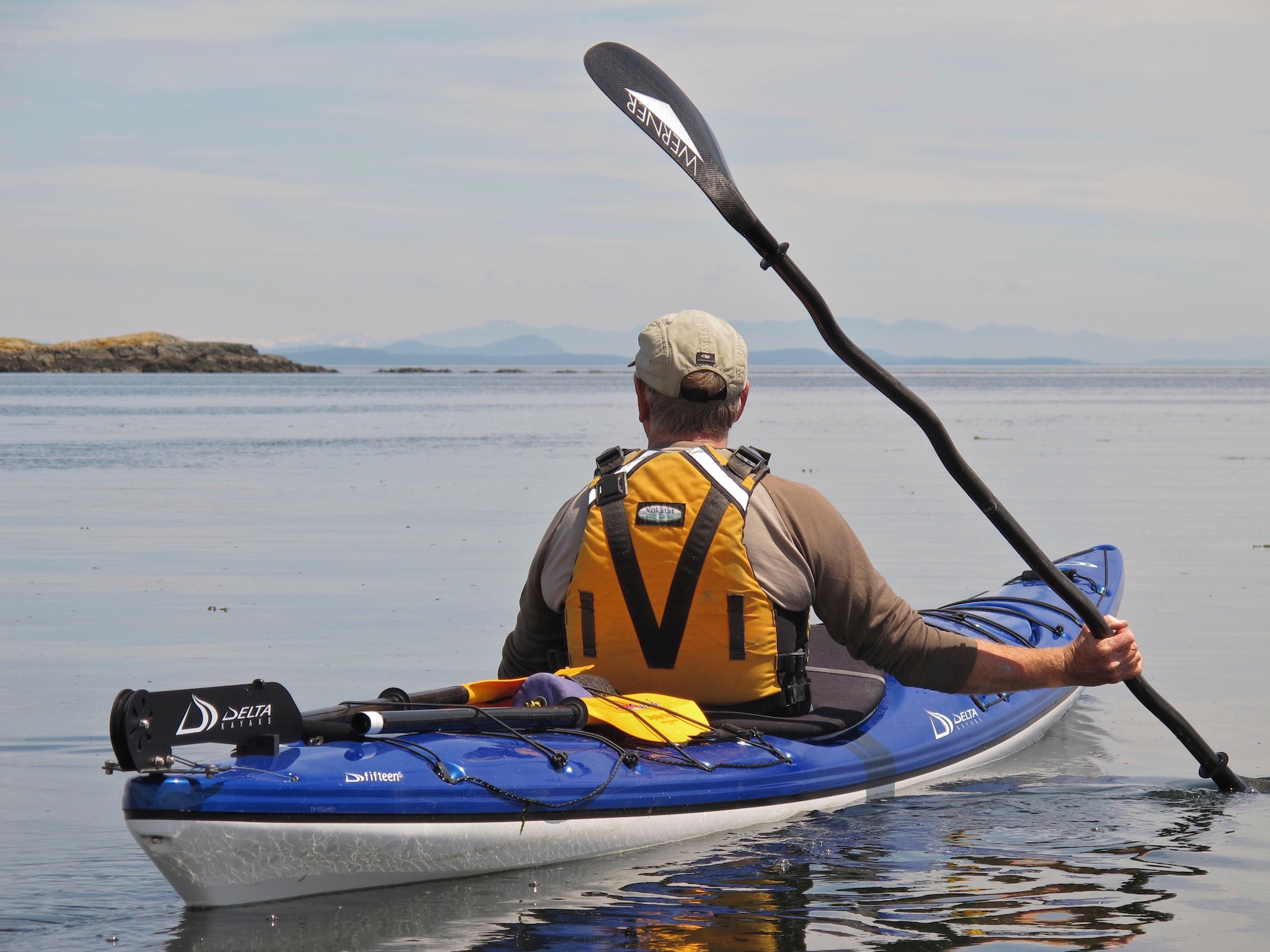 However, add such factors as wind and waves to the equation, and things change. In cross winds and quartering winds, a kayak will want to weathercock, meaning it will want to turn into the wind. Running in following seas, kayaks won’t conform to the shape of the waves, so they will broach, meaning they will turn sideways to the waves. A well-designed kayak should actually weathercock. This occurs because as the bow cuts through undisturbed water, it tends to pin or hold the bow in place while the stern riding through through more turbulent water can get blown around. Unless you are paddling directly into the wind, your kayak will require some paddle stroke corrections to compensate for the weathercocking. Any kayak in following seas will broach and also requiring corrective action from the paddler to prevent it. This is where rudders and skegs have an important role. 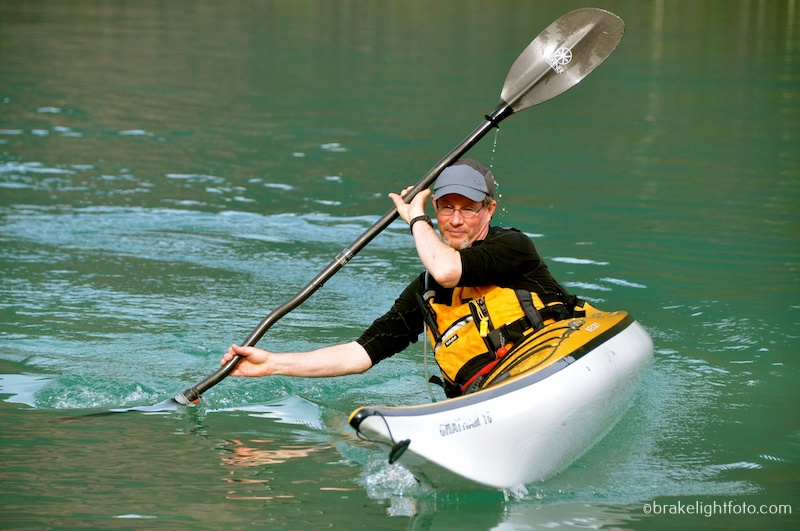 Turning a kayak by edging

What is the difference between a rudder and a skeg?

A rudder is a blade attached to the stern of the kayak that can pivot from side to side. They are controlled by foot pedals in the cockpit which are connected to the rudder with stainless steel cables or very strong cord. Rudders are designed to lift up out of the water by means of a cord system and generally fold up out of the way on the rear deck. 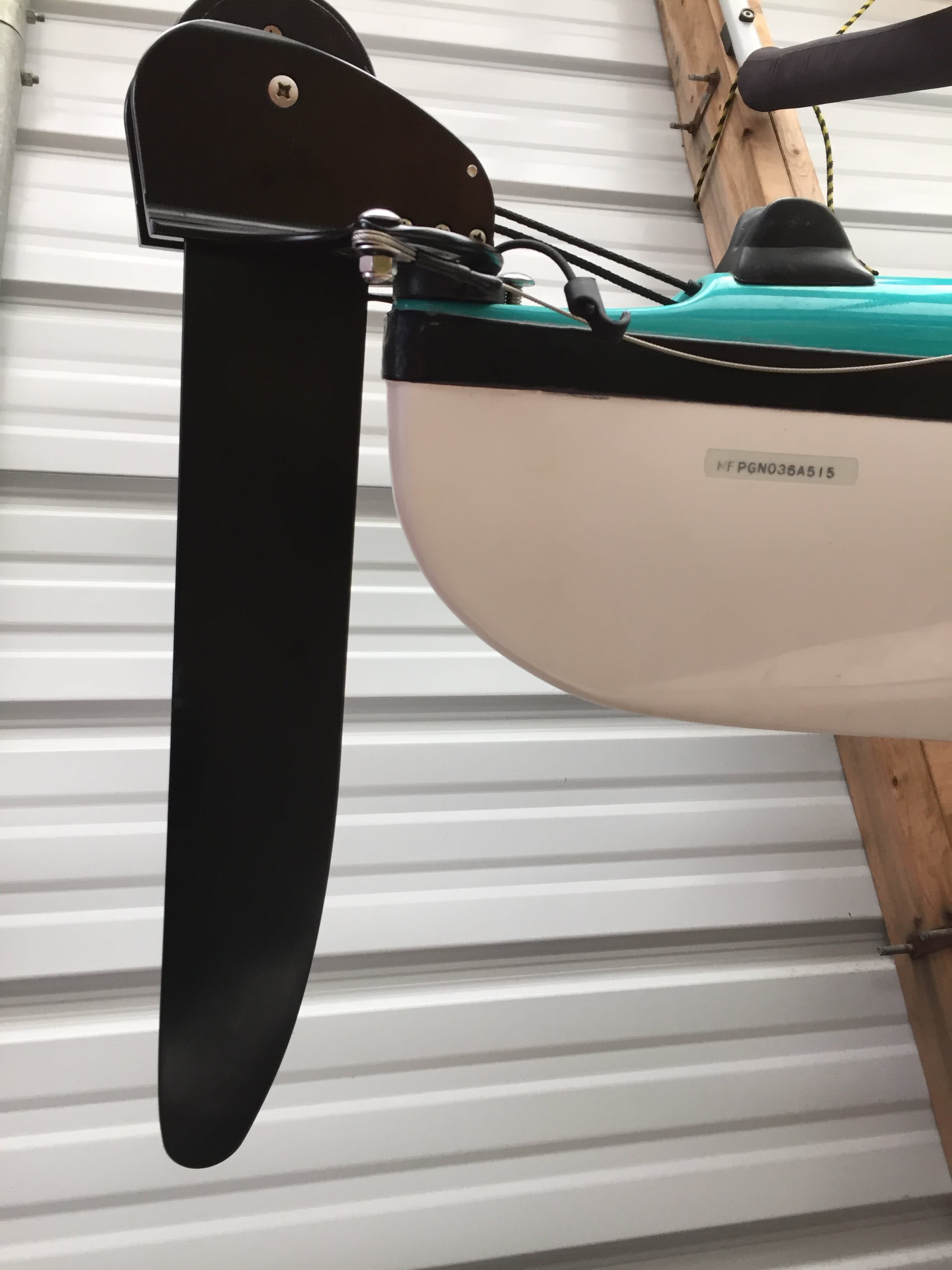 A skeg is a retractable blade that drops out of a slot in the hull of the kayak near the stern. It does not pivot. It is dropped and retracted by means of a slider usually on one side of the cockpit.

The function of rudders and skegs

The function of rudders and skegs is often misunderstood. The first thing you need to understand about both of these devices, is that they don’t have to be used.  They are there to assist your paddling when conditions change. Novices to the sport often think that a rudder is primarily used to steer the boat. While this is true, and it is an advantage a rudder has over a skeg, its primary function is to keep the kayak on a straight path. Rudders are controlled with your feet. Pressing on the left peddle turns the boat left, pushing right, turns the boat right.

On the other hand many people think that the skeg is used to make a kayak track in a straight line. Once again, while essentially true, its actual function is to ‘trim’ the boat when wave and wind conditions begin to adversely affect the boats handling. As was mentioned earlier, a well-designed kayak should weathercock in the wind, so when the skeg is up, the boat will turn into the wind. If you lower the skeg fully, the kayak’s stern will be pinned in the water and the kayak will turn downwind. With the skeg partially lowered, the kayak can be ‘trimmed’ to better handle crosswinds or quartering winds. Indeed, small adjustments, up or down, can be made as required to trim the boat to match the existing conditions.

Pros and Cons of Rudders and Skegs

Probably the most common argument leveled against rudders is that they are vulnerable to failure, whereas skegs have less moving parts so are more reliable. First of all, both systems can fail, but not commonly. I have been paddling the coast for many decades, anywhere from day trips to multi-week trips, and I have only had a rudder fail once, and that was on a prototype boat with a prototype rudder. That being said, I am fairly assiduous in checking my rudder and cables for any wear before I leave on a trip. If I notice my cables are beginning to fray or show signs of corrosion, I replace them. I also carry spare cables and the necessary tools to change them in my repair kit. If a rudder cable does break while you are blowing downwind in rough seas, it can be serious, particularly in older boats with sliding foot rests connected to the rudder. In this scenario you no longer have a solid footrest to brace on. Newer designs with fixed footrests and the rudder controlled by a separate hinged toe plate make this far less of a concern.

Rudders, being attached to the end of the kayak, are at more risk of collision damage. One very common way to damage them is to leave them down while backing up, so alw

Good Place for a Rudder

ays raise your rudder before you do.

The biggest advantage of a rudder is in following seas where the ability to steer the kayak with your feet and keep it from broaching provides a significant advantage over boats with skegs or boats with nothing at all. This allows you to use all of your energy for paddling forward. My trip with the prototype boat and rudder was my real first experience with this situation.   My partner and I had been paddling side by side for miles in fairly large following seas and 20 knot winds when my rudder broke. After the loss of my rudder,  I was no longer able to keep up as I was expending so much effort just trying to keep the boat from broaching.

You will perhaps notice that racing kayaks, both flat water and surf skis, all have rudders, and they have them for this exact reason, all of your paddling energy is expended going forward and not wasted on corrective strokes.

Whether or not you may be a purest and only use your rudder when conditions warrant, many recreational paddlers who don’t care about going fast or paddling rough water will enjoy the ease that rudders bring to steering the boat, whether that is just making gentle turns around obstacles or to help correct for breezes and currents.

Skegs are not impervious to mechanical problems. In fact, the most common affliction is getting small stones stuck in the skeg well and jamming it. If you aren’t careful and try to un-jam it with the slider, you can kink the cable creating a more serious issue. The other downside of skegs is that the skeg box takes up  valuable storage space in the rear hatch.

Skegs are a great way to improve boat handling in windy conditions, but they will not give you the control that rudders will. Skegs have less risk of collision damage because they are under the kayak, but you will still need to exercise caution and remember to raise them when landing or backing up in shallow water. If aesthetics are important to you, skegs, because they are under the boat and not visible don’t detract from the clean lines of the kayak. 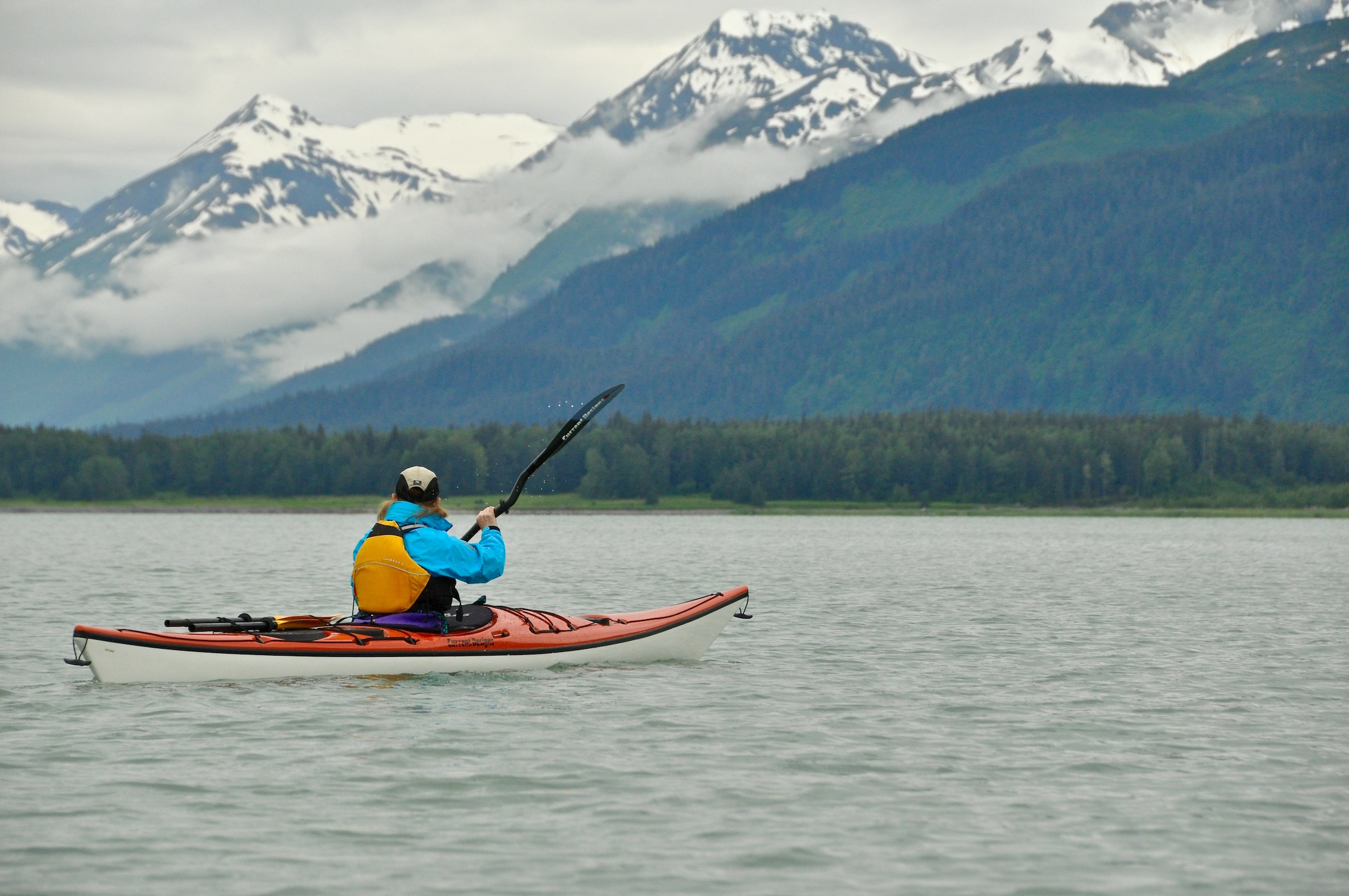 Skegs don’t distract from the clean lines of the kayak

Paddling is about having fun, and everyone has a different idea of what exactly that means. Whatever kayak you choose, whatever system you end up with, your goal should be to enjoy your time on the water and not frustrate yourself with things you think you should or shouldn’t have. Learn to paddle well and learn how to control your kayak without your rudder or your skeg so that if the worse happens and something does fail, you won’t be completely lost without them.

There is no one system that could be classified as ‘the best’. The reality is, different kayak designs often suit one system or the other. For example, the longer the boat and the lower amount of rocker it has, the harder it is going to be to turn and as such, may suit a rudder better. Fortunately, most kayak manufacturers have made the decision for you as to which kayak design should have a rudder or a skeg and that is the way they come.

So, the choice then becomes largely a personal one base on the type of paddling you will primarily be doing. Kayaks are all different, no one boat does everything well so choosing one comes down to choosing what is the most important to you. 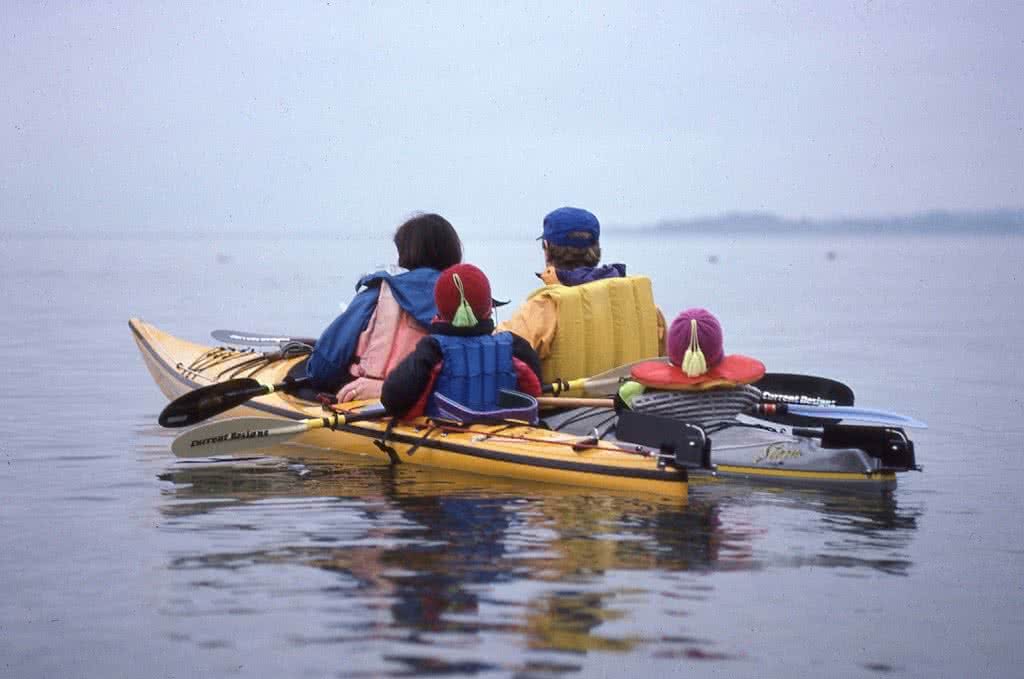 Bruce Holland  – You can also catch me at  Ourhomehas6wheels.com  or  Brakelightfoto.com

2 Responses to “Rudders or Skegs? Which Way to Turn?”