A huge component of paddling in moving water is being able to read water; being able to tell what is currently happening with the water and how it will cause your boat to react. If you can’t read water, you won’t be edging correctly, won’t have the correct angle to eddy lines, you will paddle into all the wrong things and will most likely pay for it with a rather wet, sometimes traumatizing, experience. The following is not only relatable to rivers and creeks but any kind of white or moving water. Water on the ocean and in rivers is always moving and is ever-changing, so you can’t just read it once and know that spot for life.

Here are some basic tips to help beginners to read water. 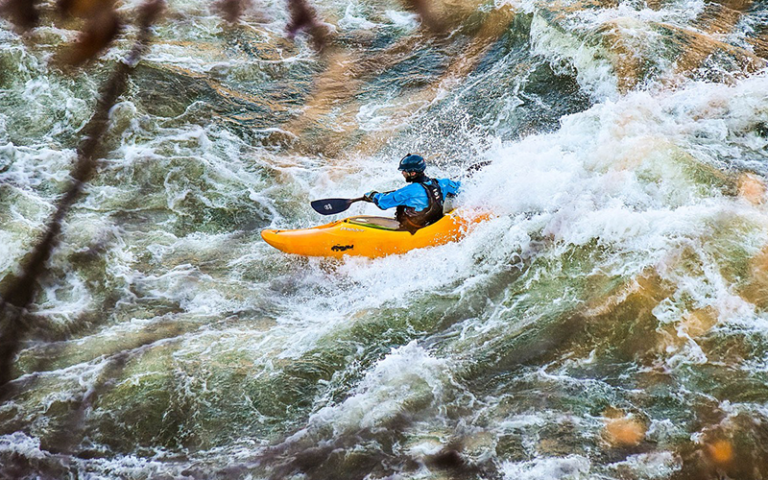 What is white water?

When I say whitewater I don’t mean only on rivers. Let’s narrow this down to a few key ingredients. First, you need moving water. But if the water was just moving down a smooth planer surface with no corners, would there be any white? I don’t think so… If you added just one little rock that you were somehow able to bolt to the bottom of that planer surface would there be white? I think yes! Any deviations to the bottom, sides, or top of the river can cause rapids. Anything that deviates the water’s normal direction of flow. So, what are some whitewater features out there and how can you read water to understand them? Most importantly, what makes all the fun stuff? I’m starting to crack open a monstrous topic here so I’ll just focus on eddy lines, waves, and holes but keep in mind one could write a thesis on this if they wished.

First, lets talk about two obstacles that create the features on the water that  we want to understand:

What is an eddy?

Understanding the basics of what an eddy is, we consider this essential.

Eddies are pieces of water where the water is either moving in an upstream motion, not moving at all, or boiling like a pot of water. These are formed from some kind of land protruding into the flow. This could be a small rock, a large island, a full peninsula, or even another paddler. Anything that breaks the downstream flow.

If you shone a light down a hallway with some furniture in it, the shadows behind the furniture would be the eddies. If it was blowing 50-knot westerlies at Ogden Point, you could get out of the wind behind a car in what we could refer to as an eddy.
Eddies disturb the normal flow of things but water still needs to fill up that space, so it comes in from other directions. The water could boil up like in a pot of water, it could flow in from the downstream side of the eddy, or more often than not, hang around in the eddy for a while and not really move too much. Identifying eddies in the water is usually quite easy. The water will be doing something quite different compared to the normal main flow. 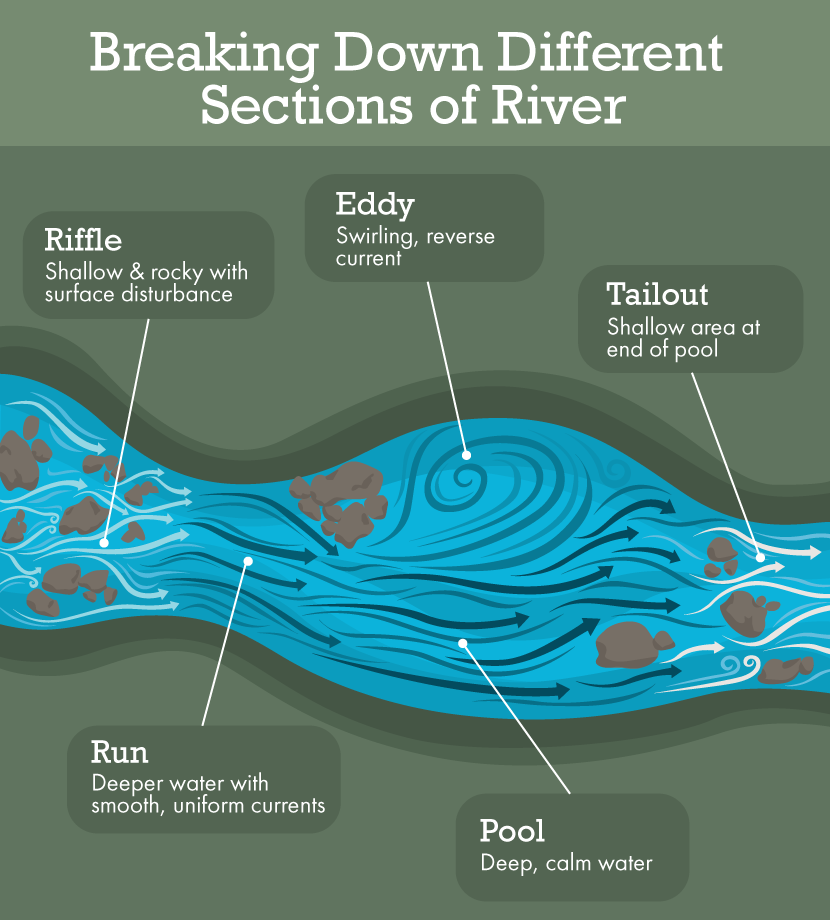 Now that we understand eddies a little more we can talk about corners. When moving water is pushed around a bend it does not all flow the same speed. Generally speaking (there are always exceptions) the fastest water is on the outside of the bend. This is easiest to grasp when you think about centrifugal force. If I had a Nalgene half full of water and windmilled it at my side in circles like a cricket pitcher, despite gravity the water stays at the bottom of the bottle. Same deal with the moving water on corners. Sometimes the corner is so significant and the water is pushing to the outside so hard there is even an eddy behind the inside corner.

Now let’s talk about the features that are created by physical obstacles and structures:

Eddy lines are the lines of water next to an eddy where the water changes directions. If we think about the shadows again, if you were standing half in the light and half shadowed, you would be directly on the eddy line. Eddy lines are very unstable places because the water is moving in more than one direction. Some eddy lines are a foot wide, some are a hundred meters wide, it all depends on the eddy.

Waves are formed due to a feature on the bottom of the channel. The water has to move upwards to flow over something or move downwards to fill in something. Despite the channel depth with enough current this will always affect the surface. Once the water has moved either up or down it has to even itself out again so it will continue to move up and down until back to normal. These lumps in the water are your waves. Sometimes waves are breaking, sometimes they are not. 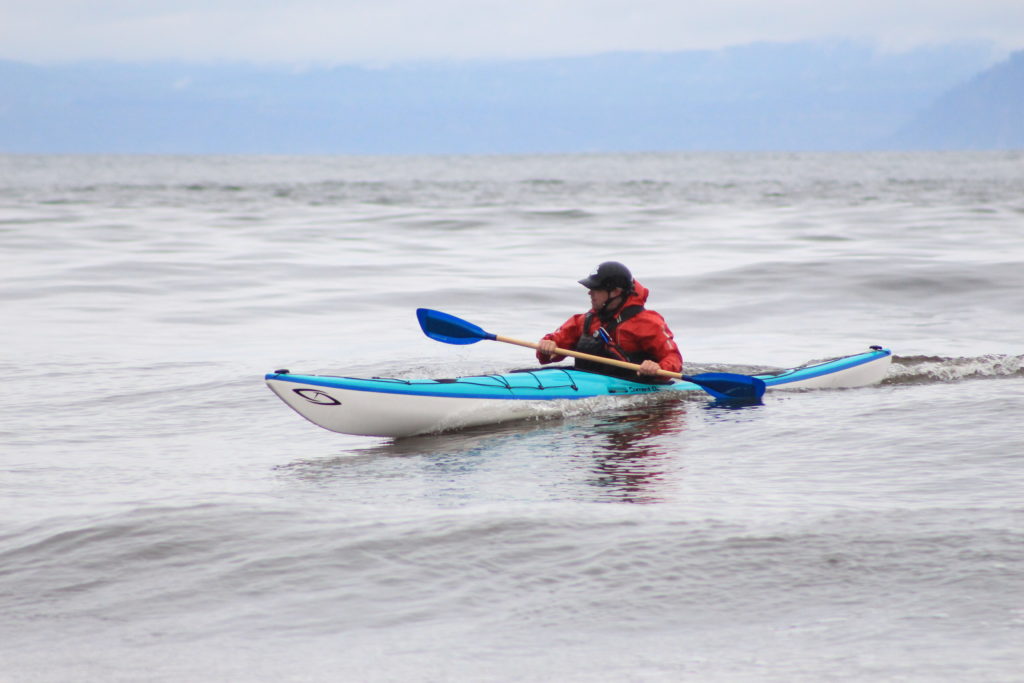 Holes are the next step up from waves and they are a little harder to explain. Think about a rock that is underwater where surface water runs over it and down the other side. The downwards speed the water has is so significant it plunges deep into the channel. This is basically creating a hole in the surface water. All that water that has gone deep does come up though and it fills-in that hole from the downstream side. Holes are something that are typically feared on rivers because if you were to paddle or swim into them that water moving upstream can keep you there longer than desired. The easiest way to differentiate between a breaking wave and a hole (and it’s sometimes challenging) is to look at the water just downstream of the feature. If there is water flowing upstream, it’s a hole, if not, you have yourself a nice friendly wave.

Alright, that is about as in-depth as I’m going to get on this. Moving water is a super cool thing to watch and play in. If you’re thinking about giving it a go, make sure you go with someone who has the skills to teach and rescue you or take a course. Ocean River offers a tidal currents course that helps you learn how to navigate and play in moving water. If you are just starting out you should learn how to perform a rescue with a beginners class and how to roll your kayak for a quick self-rescue.