Out of a workshop on Gabriola Island, a  ‘skin on frame’ kayak called the ‘Squid’  is being made.  What makes this kayak unique is that it comes as a kit that can be assembled in a couple of weekends with just a few basic tools.  The kayak is the inspiration of Ron Crown, an animator by profession and a kayak designer and builder by passion. What separates this kayak from other ‘skin on frame’ boats is that all of the wood pieces have been cut out on a CNC (computer numerical control) machine, which means precision fit parts and a very light weight end product that is small and easy to ship. The completed 12’ Squid weighs in around 23lbs/10kg. The Squid is designed for kids or small adults but Ron is presently working on a larger model. For more information, some pics and a video on the Squid check out our post: Squid Skin On Frame Kayak Kit

A Trip to Gabriola Island & ‘Made Kayaks’

Brian, aka ‘The Big Kahuna’, decided we should head up to Gabriola Island, the home of Made Kayaks & Paddles, meet Ron and take some of his beautiful traditional kayaks out for a paddle. Ron has been building skin on frame kayaks for 10 years, honing his building and design skills. He also makes beautiful Greenland style paddles on his CNC machine, which results in paddles that are perfectly symmetrical and beautifully balanced. He can also use the CNC machine to add unique in-layed decorative designs on the paddles, including your own design. For more information, check Ron’s website at: Made Kayaks & Paddles

We began the day with a tour of Ron’s workshop, the CNC machine and a look at some of his traditional skin on frame kayaks. It’s easy to fall in love with the beauty of these translucent skin boats, the graceful lines, the craftmanship and the way the light illuminates the kayaks. 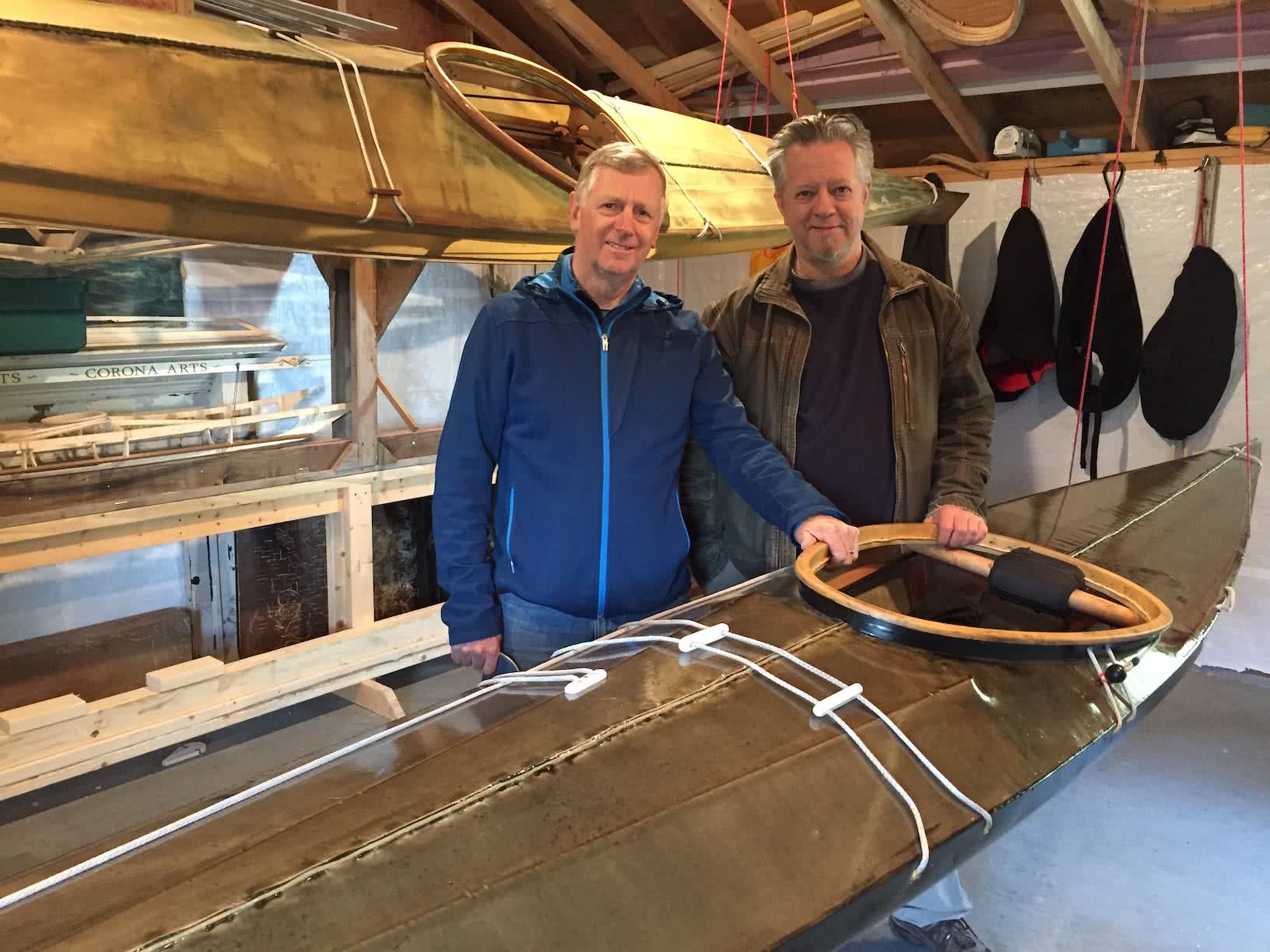 The highlight of the trip was a chance to take some of Ron’s kayaks out for a paddle.  We spent a few hours around the west side of gorgeous Gabriola Island with its high cliffs and beautiful sandstone formations. The first thing we noticed was that Ron’s kayaks are very light, coming in around 30lbs. That’s a big plus when you’re carrying them around and once on the water they feel very nimble and playful. Skin on frame kayaks are easy to customize for size, shape and fit, so each boat feels a little different.

The flexible nature of the materials makes for a pleasant ride, even in choppy, rough conditions without any noisy pounding.  I was paddling a shorter more rockered model whose initial stability was, at first, a little uncomfortable, especially since I didn’t fit the boat very well.  The secondary stability was good though and after a little time in the boat it started to feel fairly comfortable.  I was quite surprised at how well the boat tracked even with the beam winds we encountered. 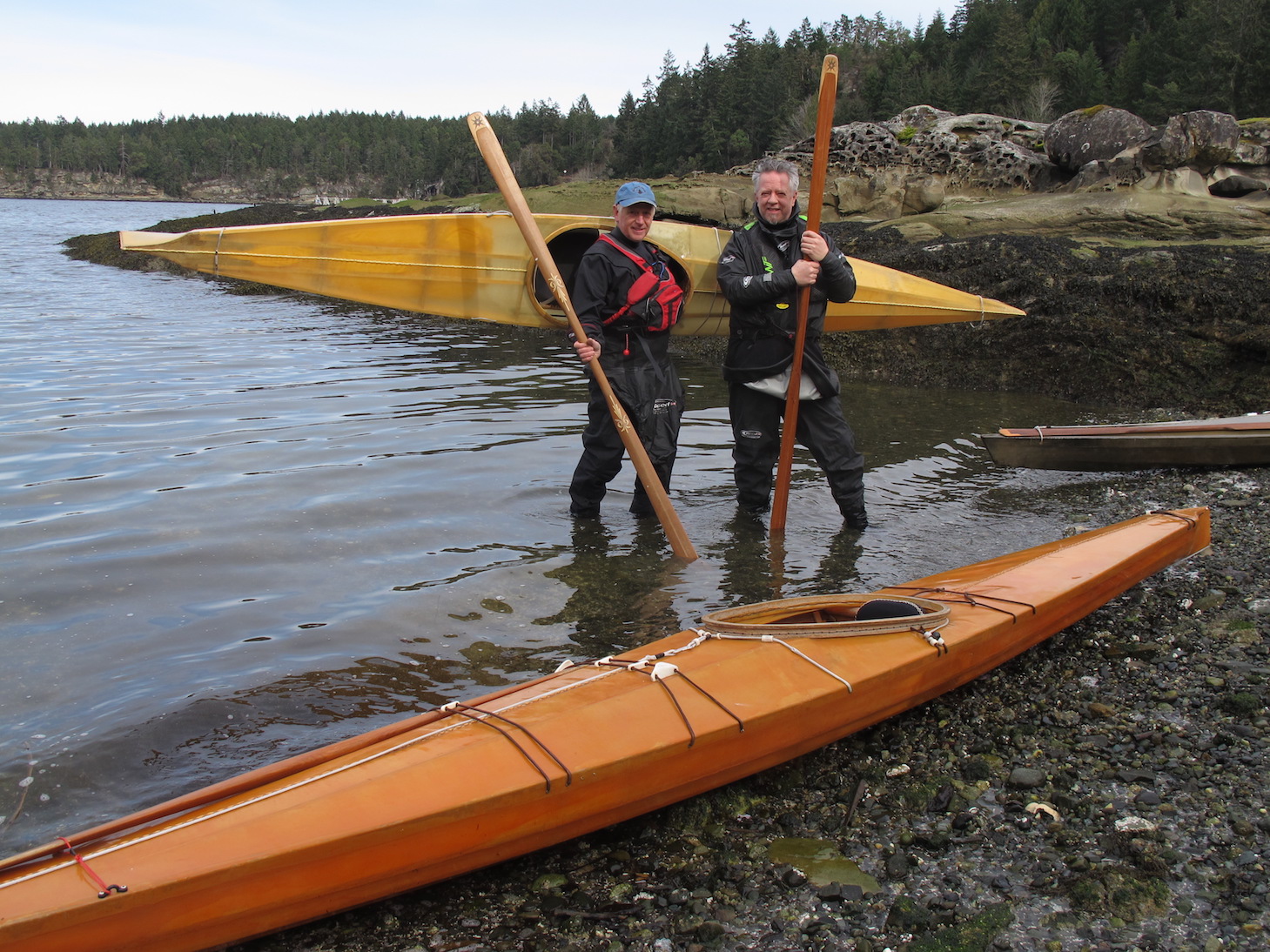 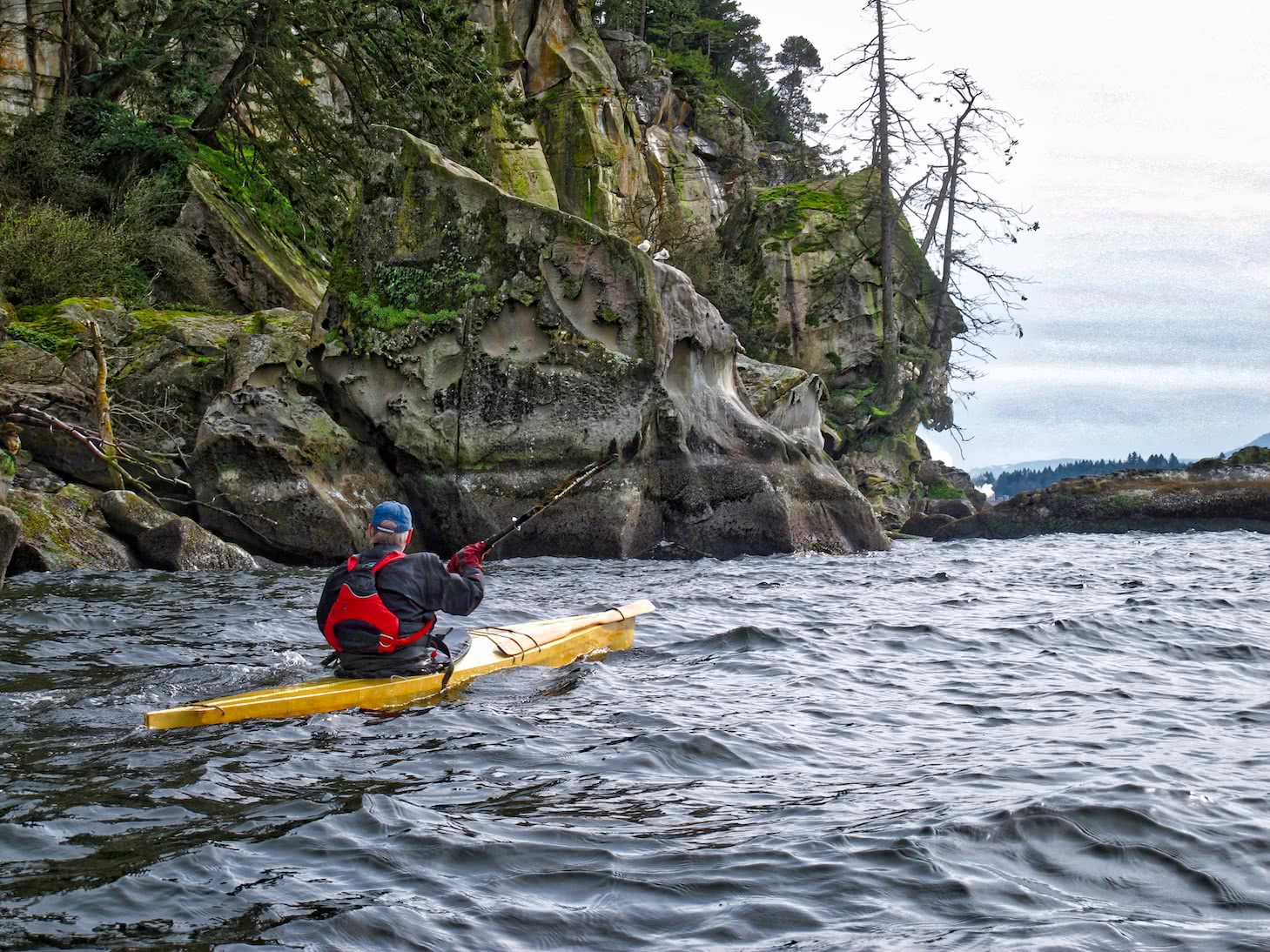 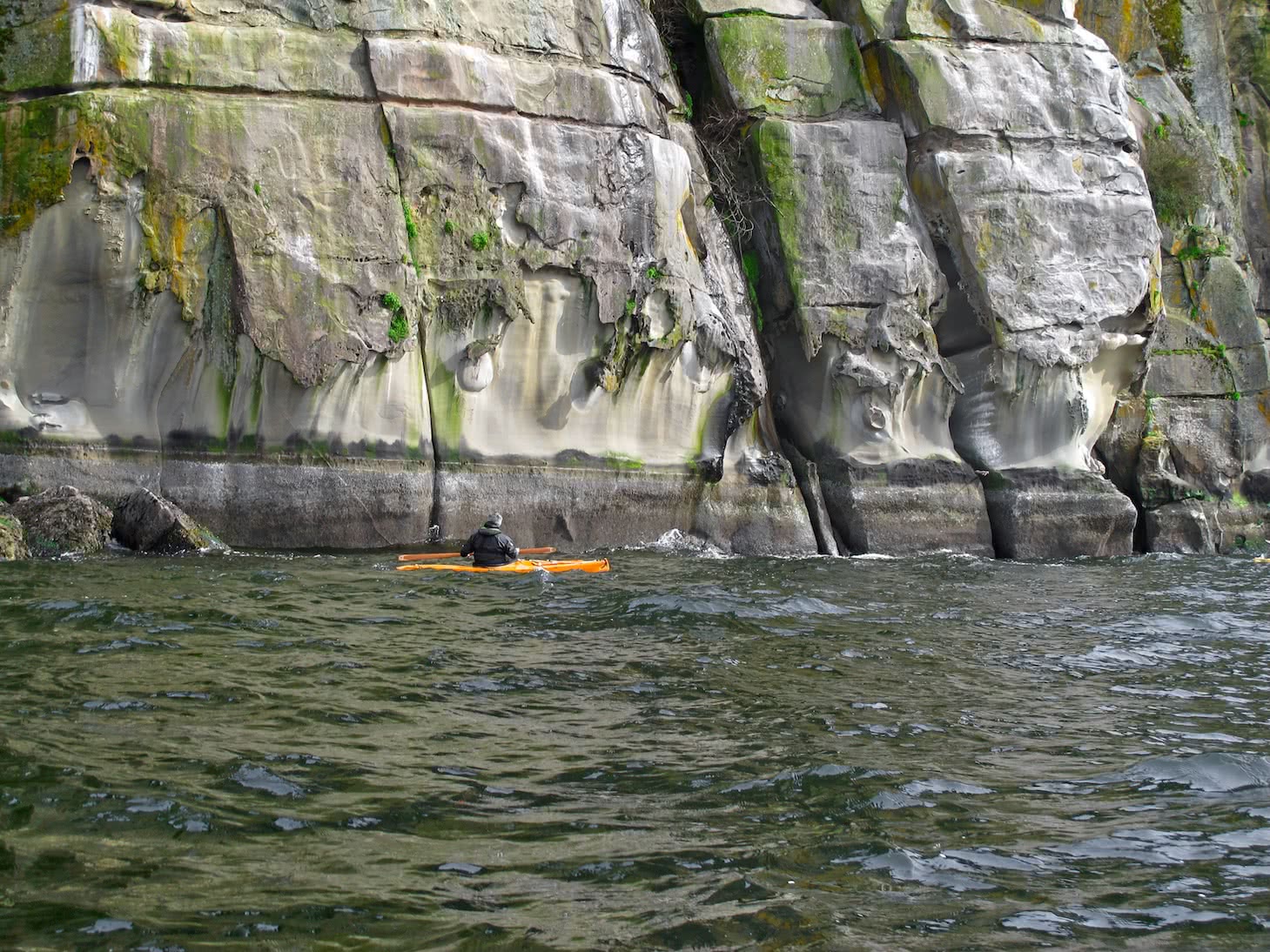 Ron under the 200′ sandstone cliffs 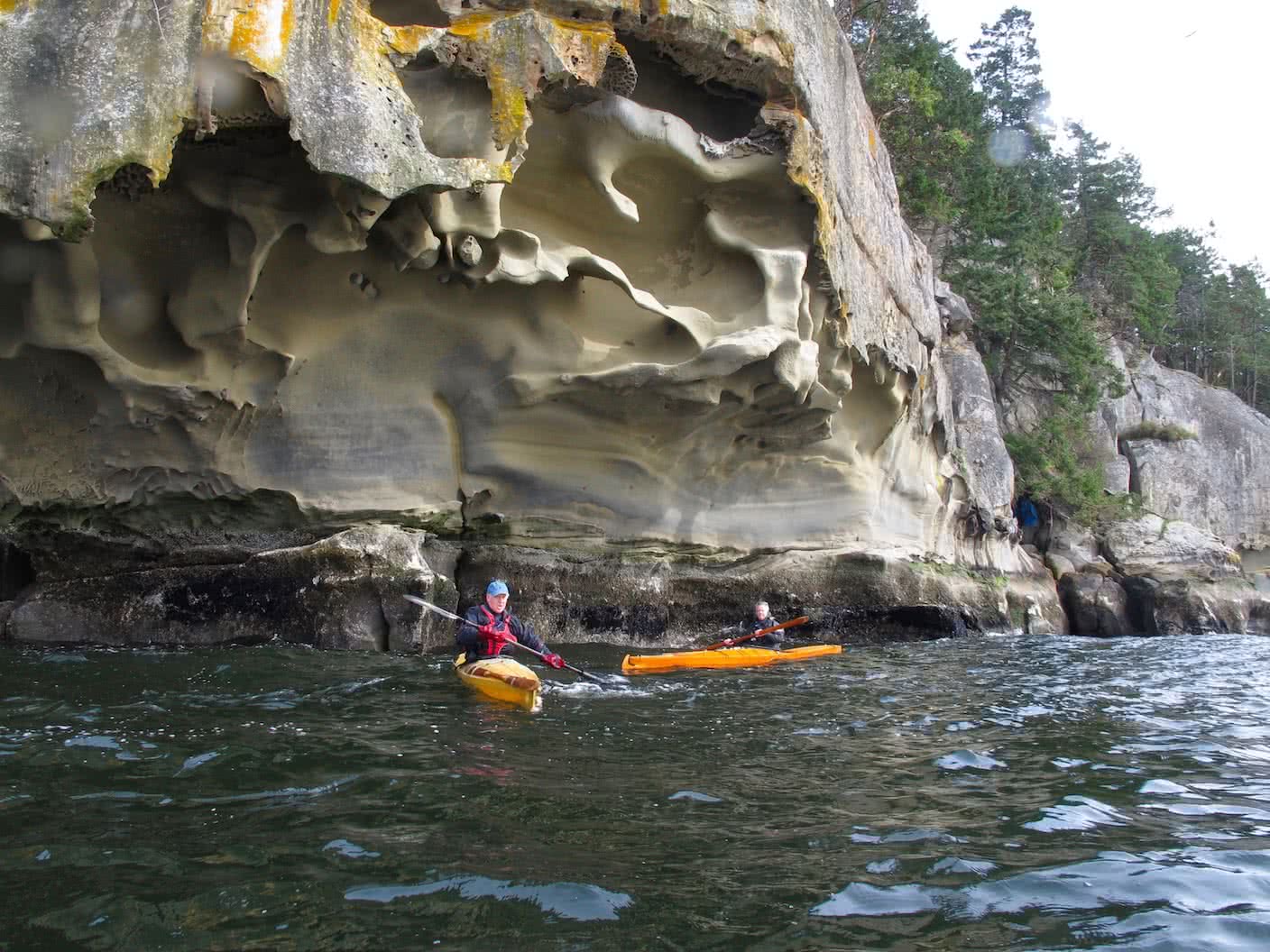 There are lots of interesting sandstone formations 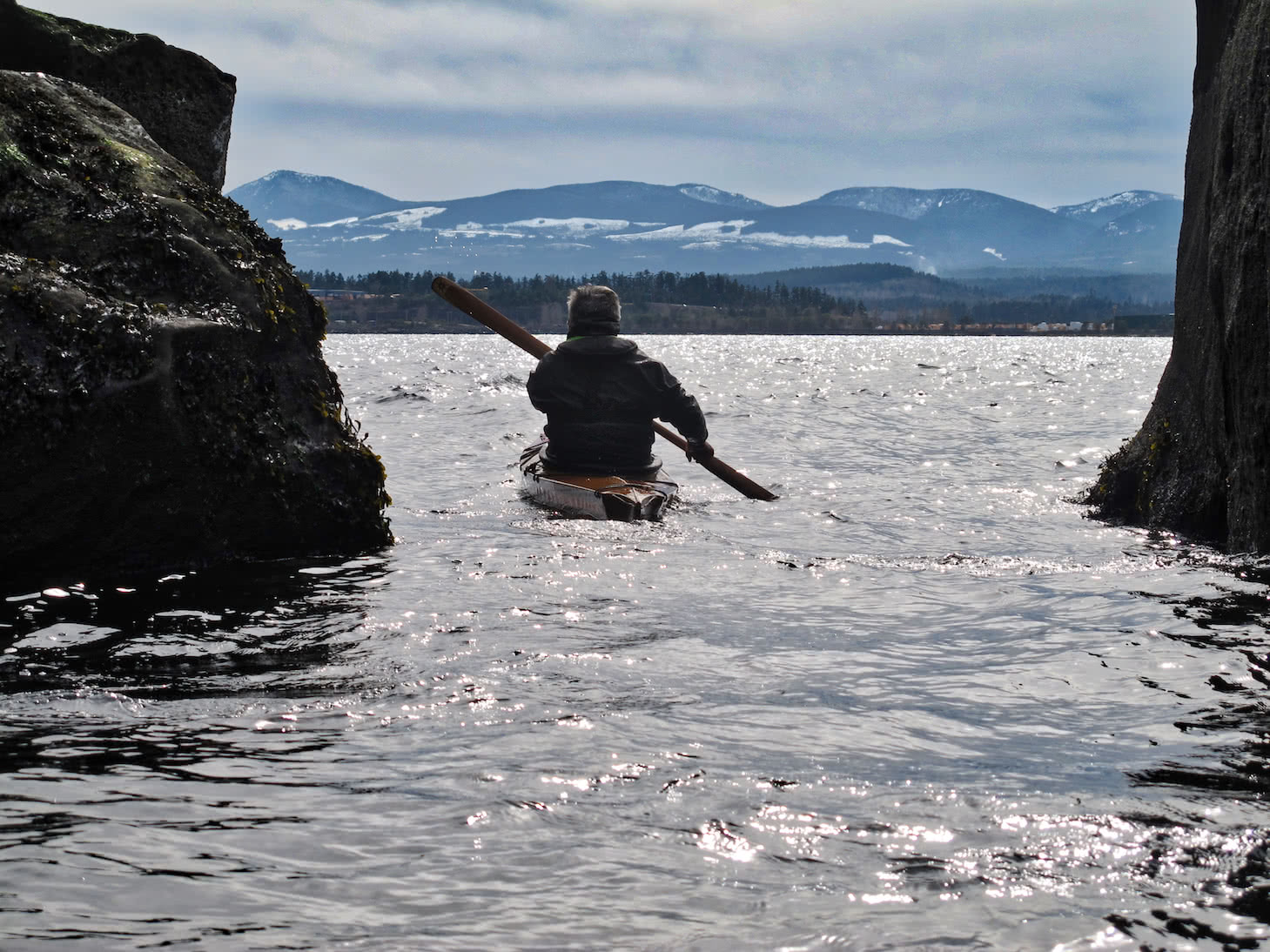 Paddling Gabriola is beautiful, even on a cool cloudy day! 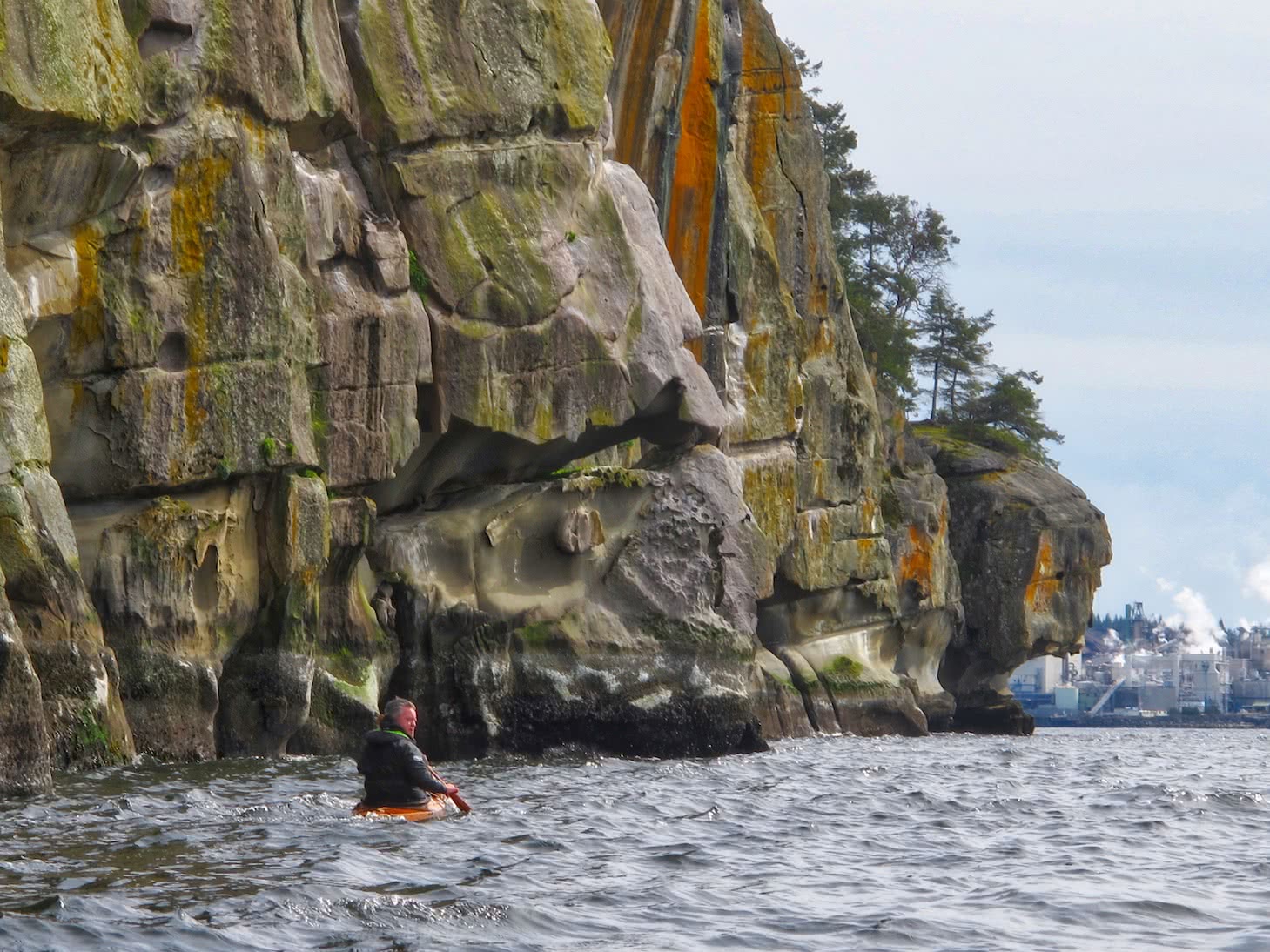 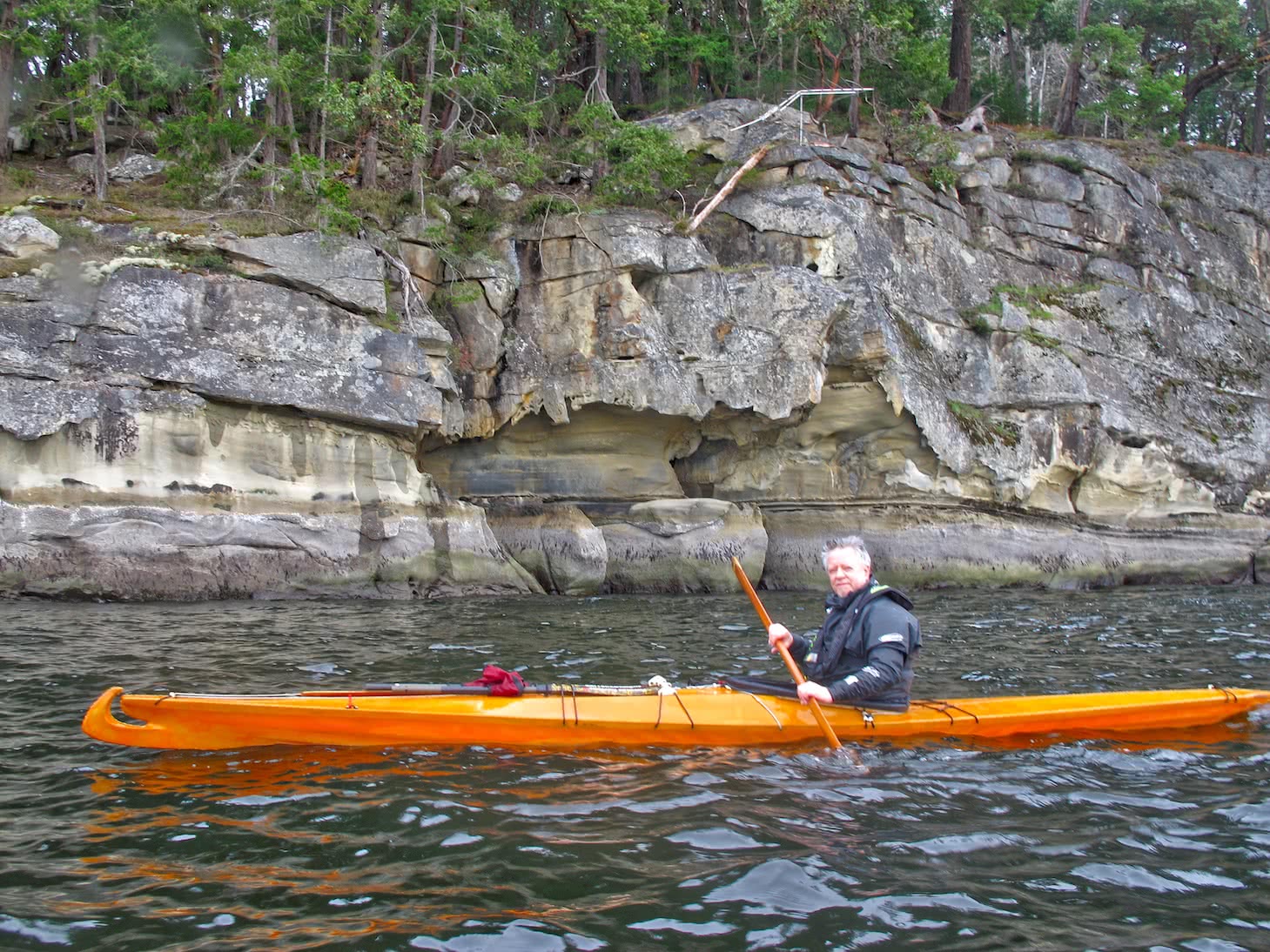 Ron Crown in his traditional Baidarka style kayak with a prehistoric sandstone monster behind him!

We were also able to try out Ron’s Greenland style paddles.  Neither Brian nor I have had much experience with these sticks, both coming from a background of larger, feathered spoon blades. Ron gave us some instruction on technique and theory which was very helpful.  As Ron explains, “The main issue is that they work so differently than euro spoon blades that when people first try one, and use them like spoon paddles, they don’t perform well so they give up. Once you learn how to use them the way they are meant to be used they are beautiful, elegant and efficient tools.”  This is absolutely true! 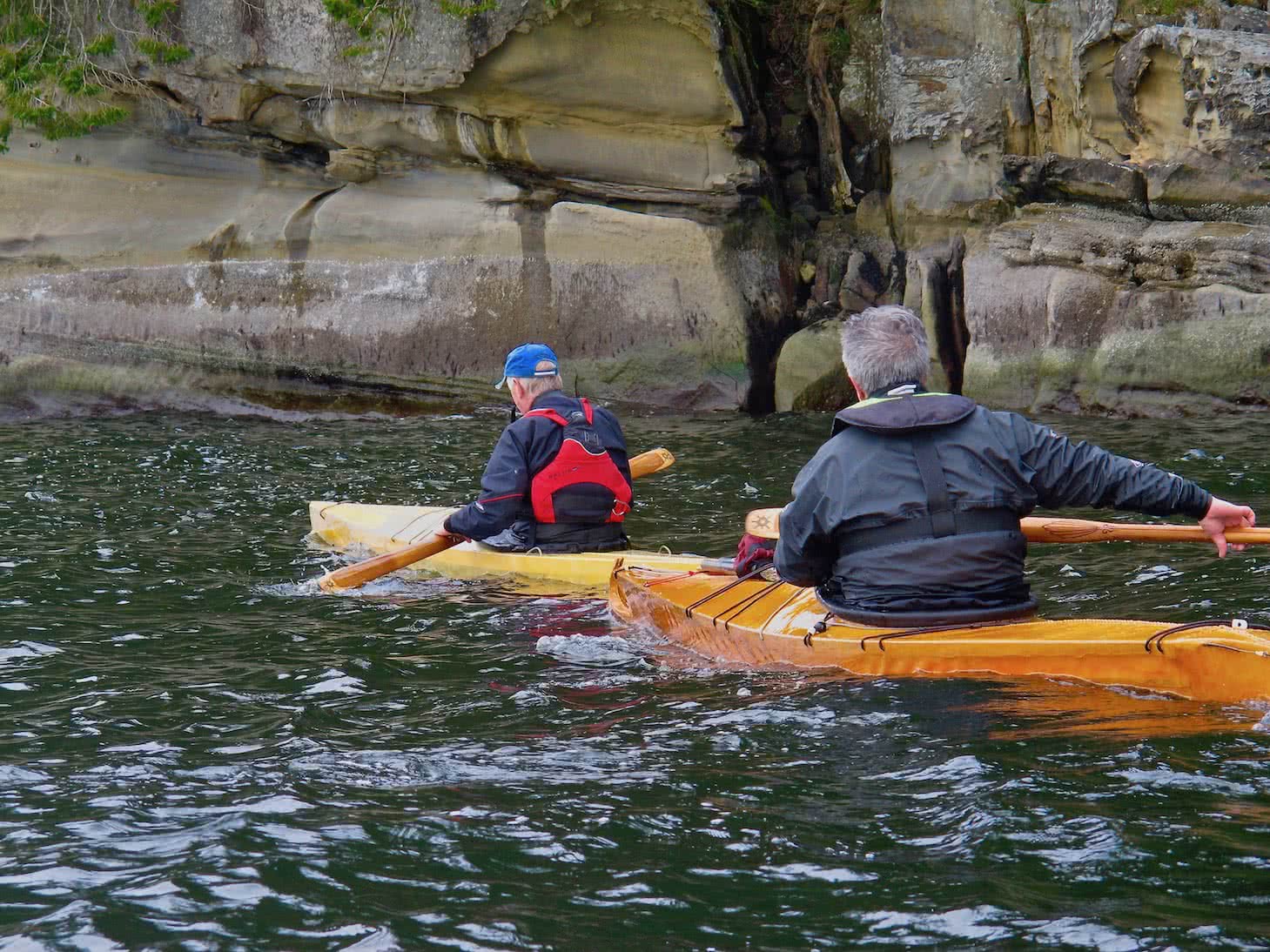 Brian and Ron practicing with the Greenland paddles

Here is Ron’s explanation of why Greenland paddles make a lot of sense.

“Spoon paddles use drag, you reach forward, dig in and pull yourself forward. The greatest resistance is at the start of the stroke when you are reaching and extended the most putting a lot of strain on you. Greenland style paddles generate lift like a plane wing. The paddle slices into the water easily at the start and ramps up resistance as it moves through the water putting a lot less stress on your body.  Spoon paddles lose all power by the time they are beside your hips while Greenland paddles generate power all the way to the stern of the kayak. You use more large muscle torso rotation and less arm muscle to push the paddle to the stern so you can paddle more efficiently without sore arms. This also makes for a longer power stroke so you use fewer stokes to cover the same distance.”

“Greenland paddles are never feathered so you can hold your wrists straight in their strongest position reducing fatigue of you smallest weakest joint. They also have a rectangular loom the fits your hand shape easily so a strong grip isn’t needed eliminating hand fatigue that some get from gripping a round shaft.”

“Greenland paddles made of cedar are very light, but the heaviest part of the paddle is between your hands and not out on the end of the shafts. You also keep the paddle,  your hands and arms much lower when paddling. Not lifting your hands, arms and paddle as much reduces fatigue. The thin blades make it easy to extend the paddle out and hold from the end for more power when doing sweep turns, bracing, sculling, rolling, etc. The Greenland style paddles are symmetrical so no worrying about having the correct blade face direction.”

“Greenland paddles don’t work as well as spoon shaped paddles for things like sprinting or whitewater paddling where digging in for quick maneuvers is important, but for touring they can’t be beat.” 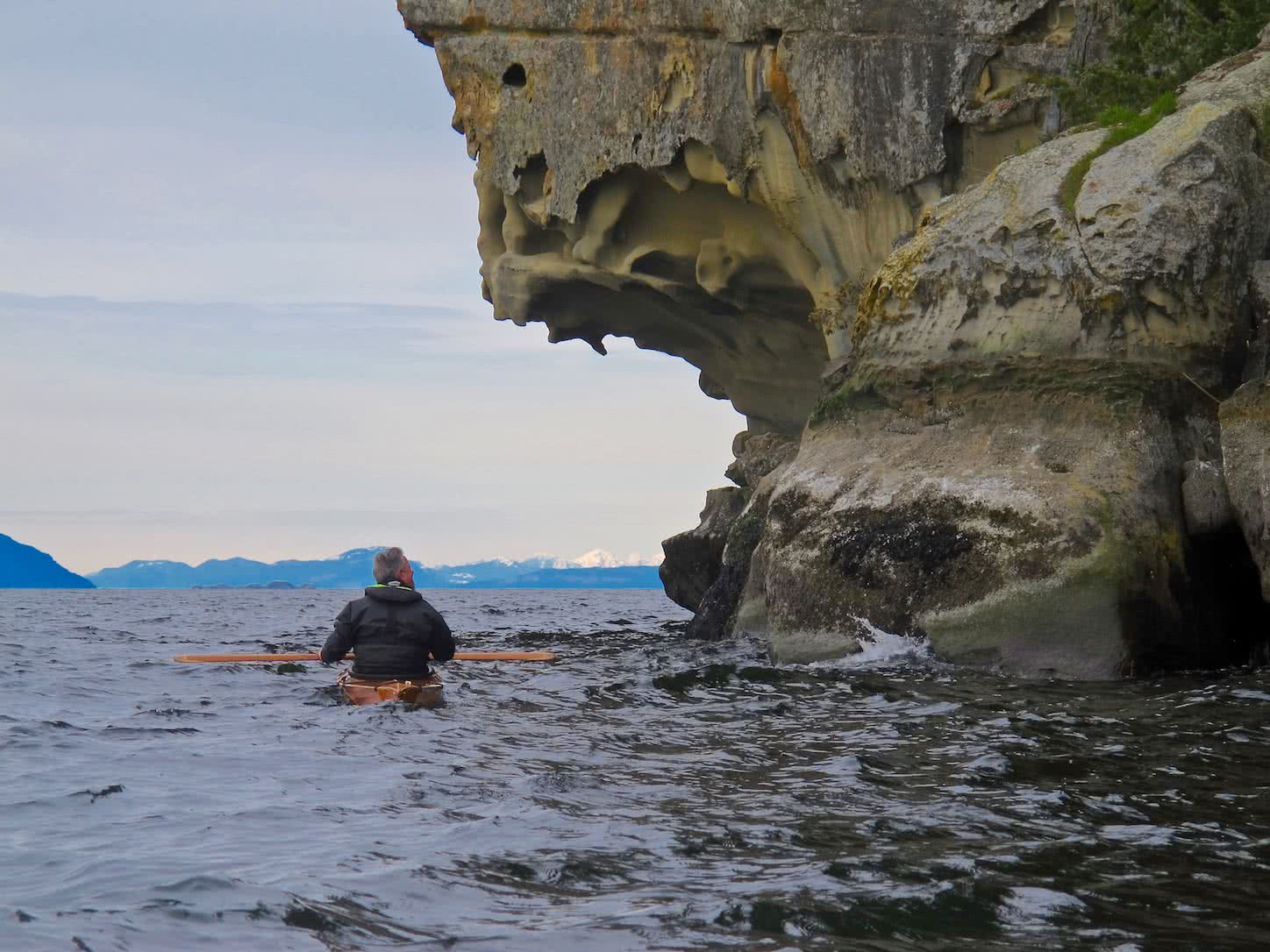 Ron under a sandstone overhang 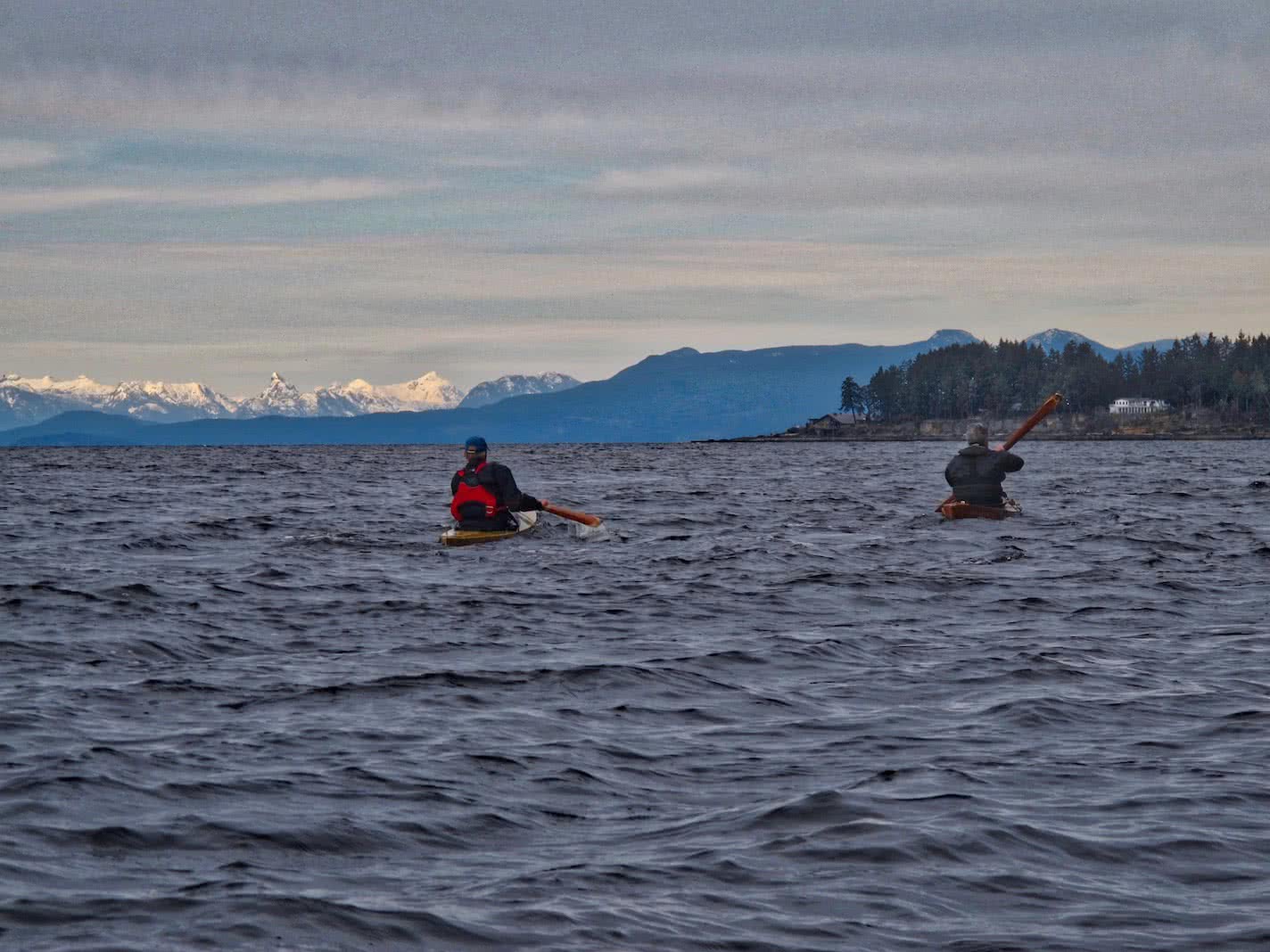 On the way home at the end of the day

Bruce Holland  – You can also catch me at  Ourhomehas6wheels.com  or  Brakelightfoto.com