What to See When Paddling Around Victoria’s Harbour

This route explores the inner and middle harbour and, weather permitting, guides you out to the Ogden Point Breakwater with it’s beautiful First Nations murals at the harbour’s outer reaches.  You will see historic buildings like the Old Victoria Customs House, the Fairmont Empress Hotel, and the BC Legislature.  You will experience the bustle of a busy working harbour,  passing ferries, float planes, yachts and other recreational boats, harbour ferries and – of course – lots of other paddle craft. 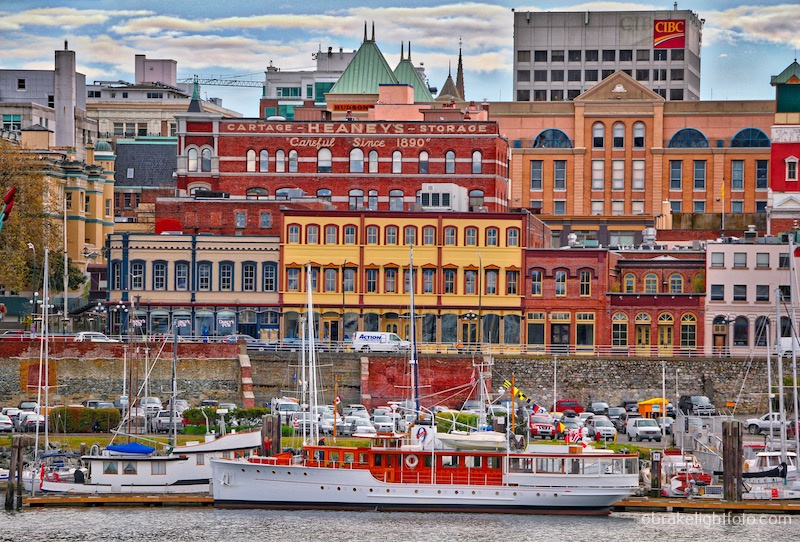 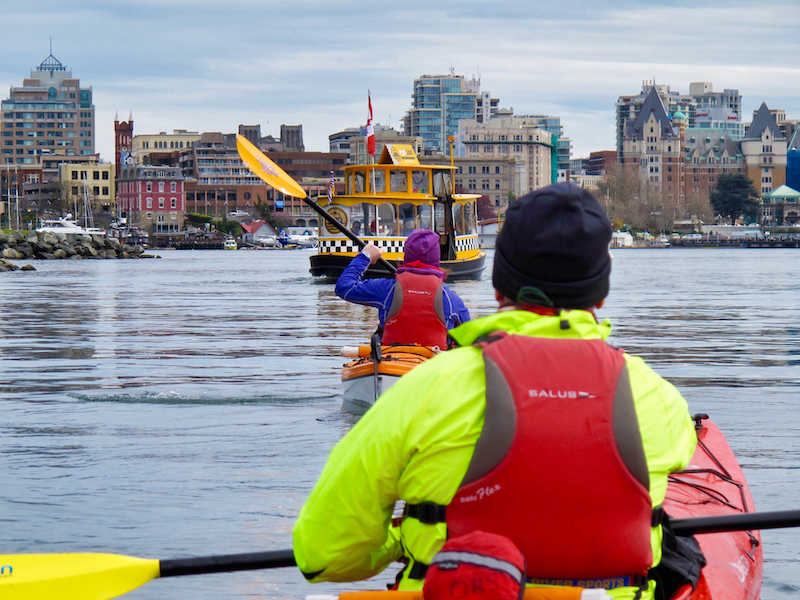 Victoria’s harbour can be a busy place to paddle!

This route is approximately 7.6 km (4.7 mi) return.  Allow 2 -3 hours depending on your paddling speed and how much time you take for sightseeing, photos and socializing.

Please be warned that Victoria Harbour is a very busy place to paddle and it is Canada’s only certified water airport.  There are aircraft, large ships, pleasure craft, paddle craft of all descriptions, harbour ferries and wildlife. Paddle craft and small vessels have a designated areas where they can go and the harbour is patrolled. Please consult the Port of Victoria Traffic Scheme to see where you can and cannot paddle and for more information on the rules and regulations for paddling in Victoria Harbour. 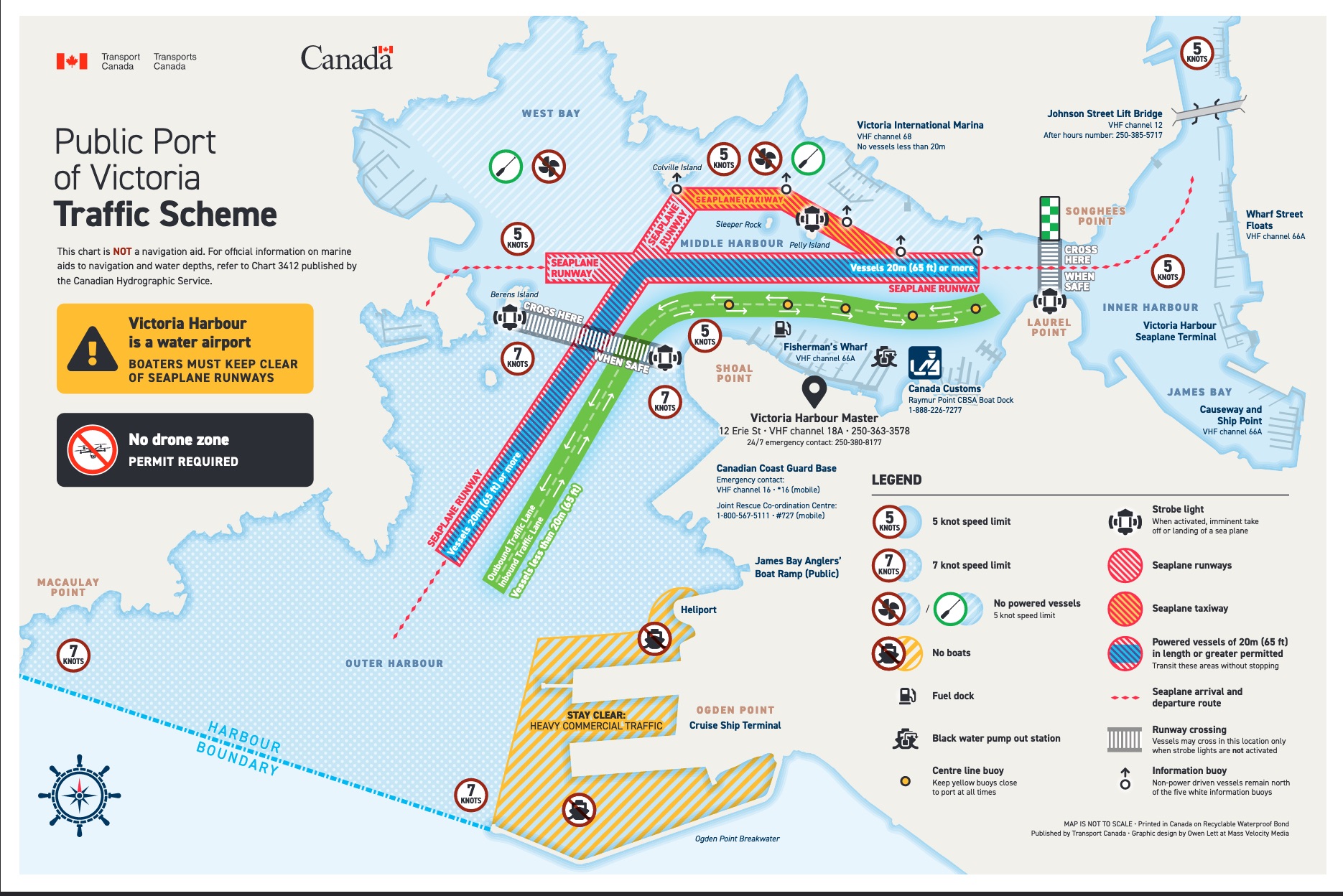 Your trip will begin at the Ocean River Sport’s Docks at the bottom of Swift St, just north of the Johnson St. Bridge and right in front of Canoe Brewpub.  The docks are ideally located and make for a convenient place to start your harbour tour.  You can also rent any extra boats or gear you may need while you’re here. 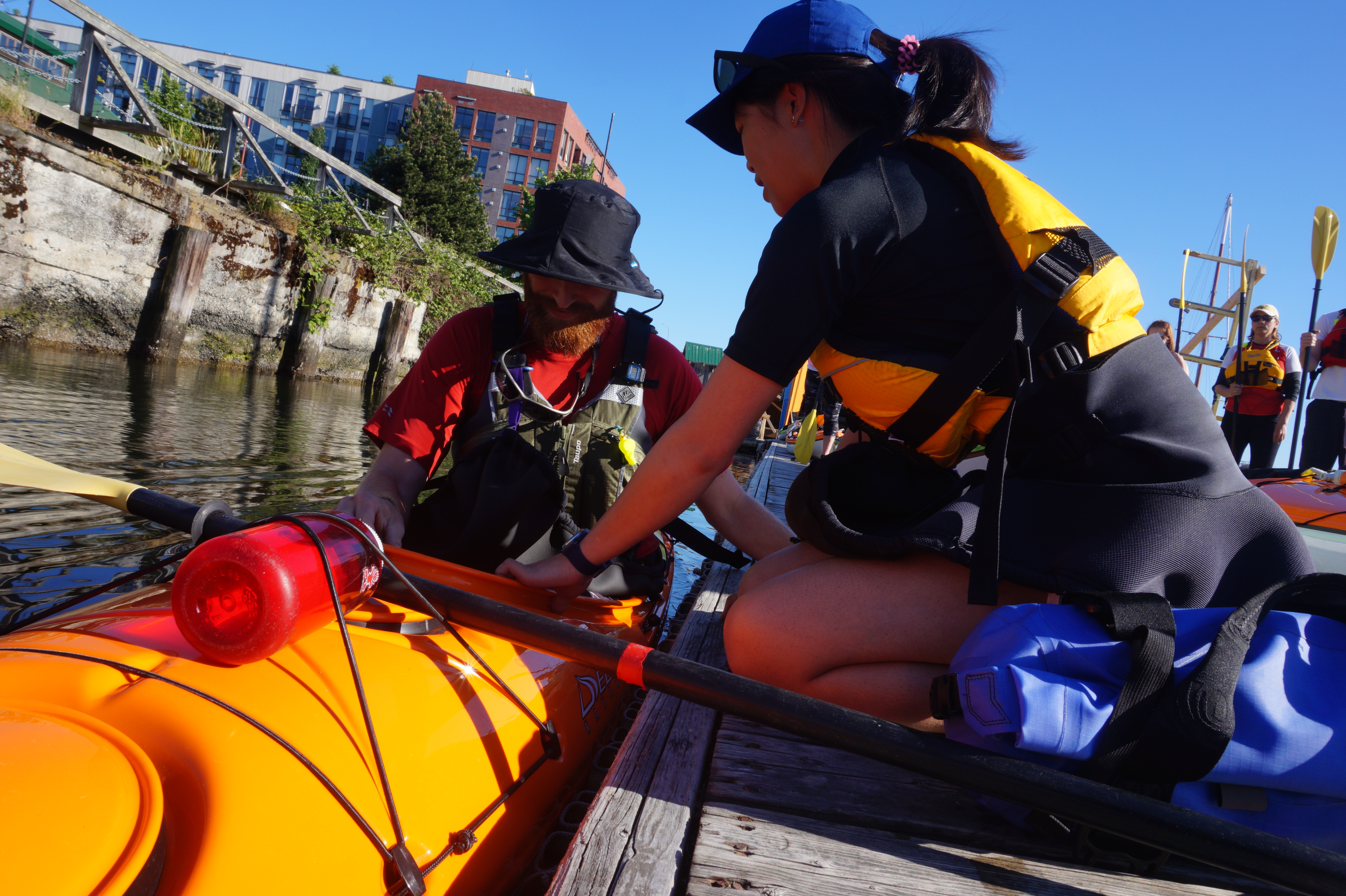 Preparing to launch from the Ocean River Sports Docks

Once on the water, head south toward the inner harbour staying close to the shoreline on your right.  Ahead of you is the Johnson St. Bridge, one of 4 bridges that have crossed here.  This one was opened to traffic in 2018, complete with bike paths and walkways.  It is a lift bridge to allow larger vessels to pass. 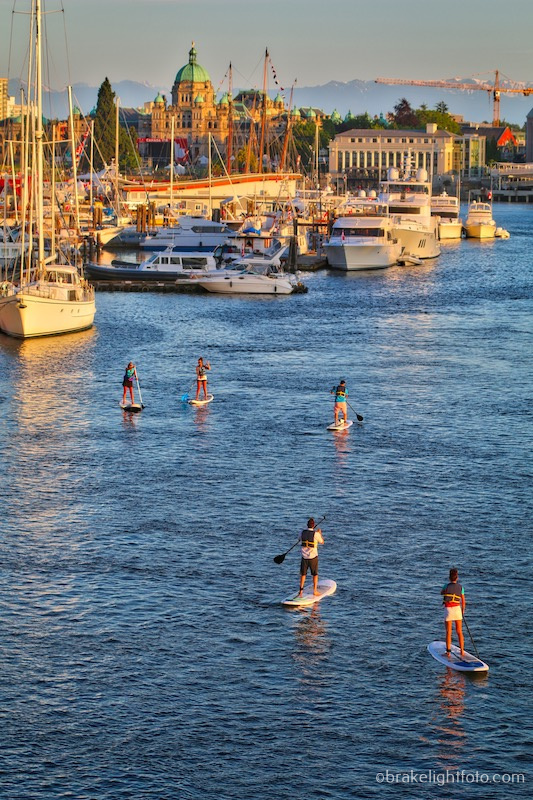 Paddle Boarders on their way into the Inner Harbour

Once you have passed under the bridge, looking left you will see a couple of decrepit old buildings called ‘the Northern Junk Buildings’.  They have heritage designation and are awaiting redevelopment.  Right beside them you will see a fading mural of a pod of orcas by famed artist, Robert Wyland, painted in 1987.  It is locally known as ‘The Whale Wall’. 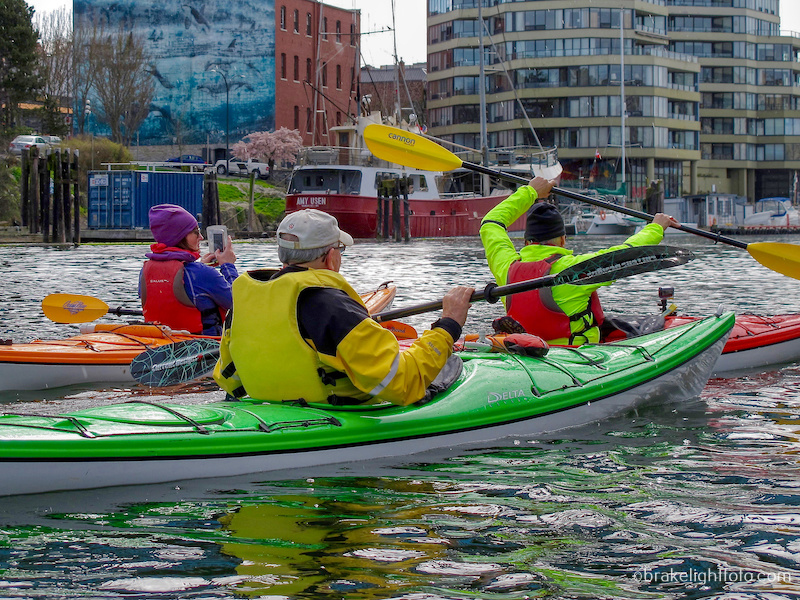 Passing under the Johnson St Bridge, the ‘Whale Wall’ is on the left

Coming up on your right is Songhees Point and the beginning of the Songhees walkway which follows the shoreline all the way to Westbay in Esquimalt.

Across the harbour to your left you will see the Seaplane Base.

Please take extreme care if you decide to go up the left shore towards the inner harbour.  There is a lot of seaplane activity in the harbour.  Give the Seaplane Base a wide berth and do not paddle under the wings of the aircraft! 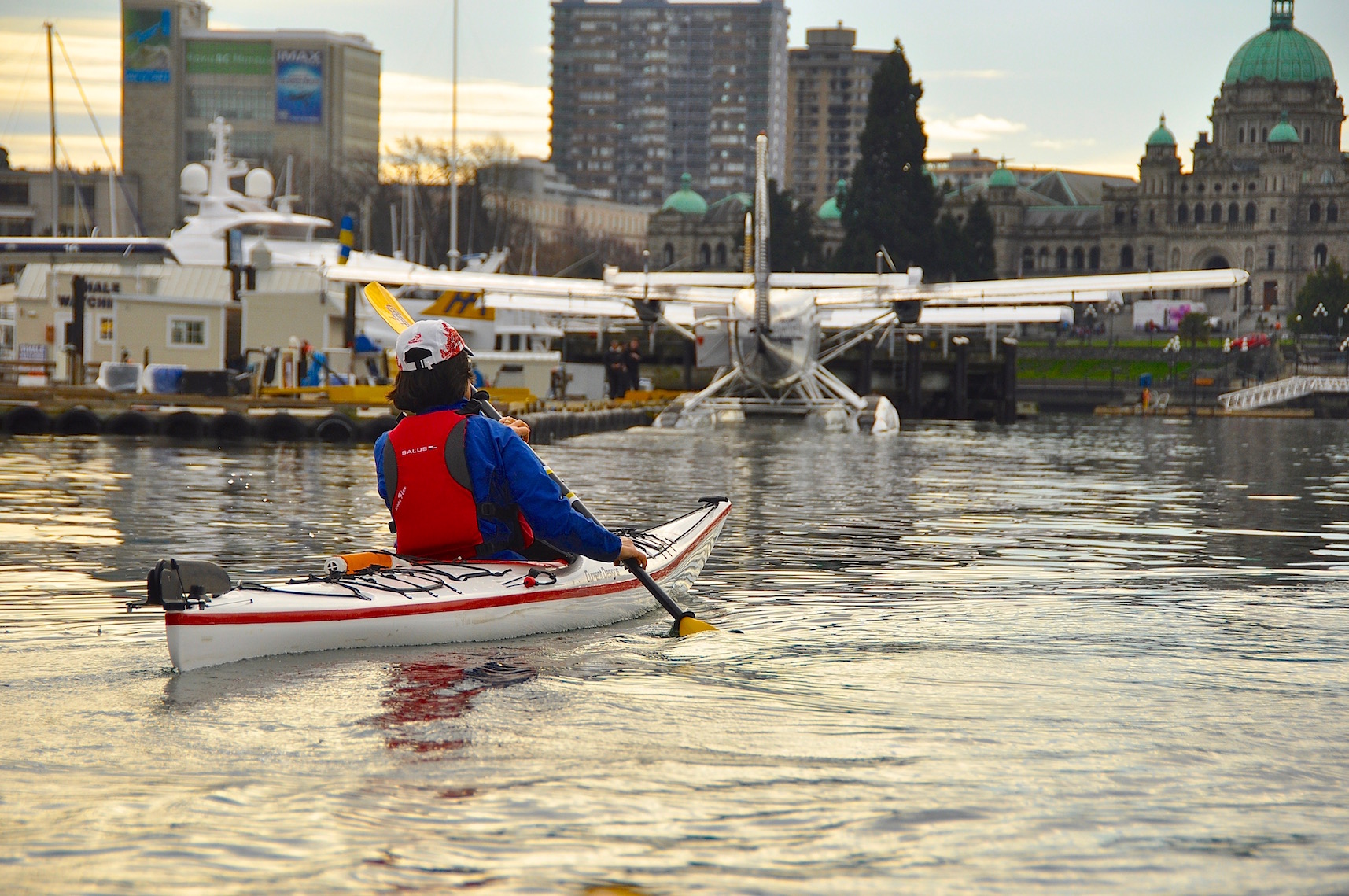 As you continue along towards Songhees Point you will approach ‘The Narrows’, the stretch of water between Songhees Point and Laurel Point.  Turning right here takes you into the middle harbour, or by crossing the narrows you can turn left and paddle into the inner harbour.  This is one of the two places where you can legally cross the harbour.  If there are white lights flashing, you are not permitted to cross as there are aircraft landing or taxiing or there are large vessels approaching. 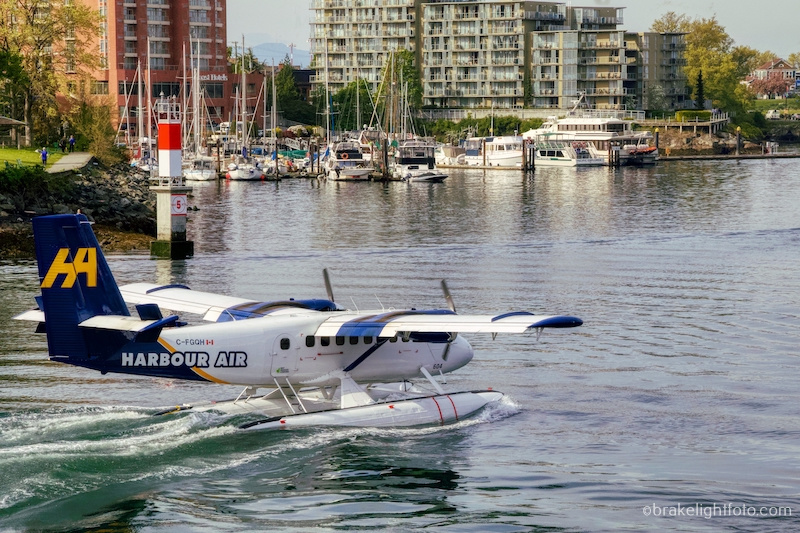 A Harbour Air ‘Twin Otter’ in the Narrows

If you choose to explore the inner harbour, cross the narrows when it is safe to do so, and continue to follow the shore along Laurel Point.  You will pass the docks and terminal for Victoria Clipper, which run high speed catamarans between Victoria and Seattle, followed by the docks and terminal for the MV Coho, a passenger and vehicle ferry operated by Blackball Ferry Lines. The Coho runs between Victoria and Port Angeles on the Olympic Peninsula. Take extra care if any of these ships happen to be in the harbour and be cognizant of any arriving or departing vessels. 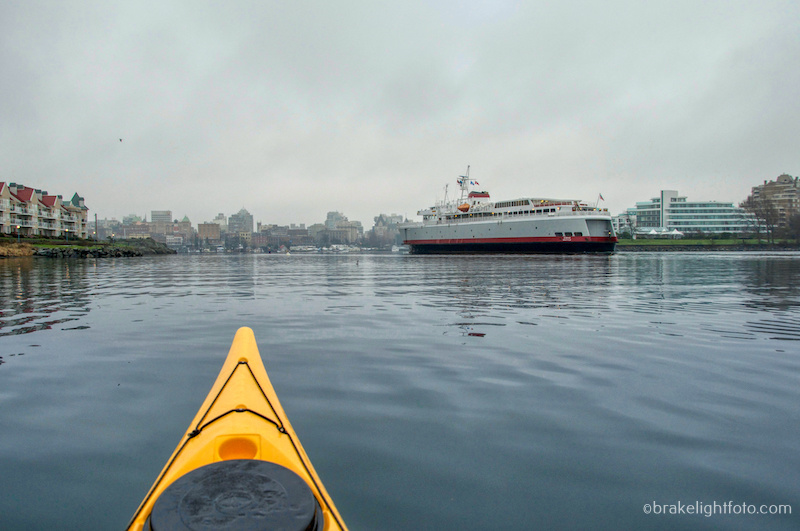 Just past the Coho ferry dock is the beautiful Steamship Terminal, which was built in 1924 and now houses The Steamship Grill & Bar and the Robert Bateman Centre.

As you look ahead into the inner harbour  you will see a large granite wall lining the harbour.  Known as the ‘Causeway’, this wall was built in 1903 and allowed for the subsequent development of the James Bay mud flats where the Fairmont Empress Hotel now stands.  The lower walkway was not part of the original wall and was added in 1974.  The Empress Hotel was built by the Canadian Pacific Railway in 1908 as a terminus for Canadian Pacific’s steamship line.  The Empress firmly established Victoria as a primary tourist destination on the west coast of Canada. 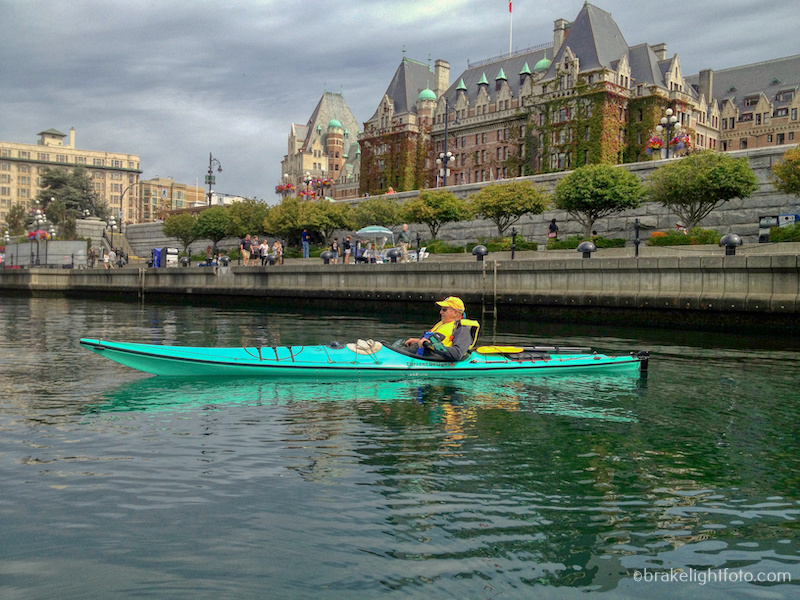 The highlight of the inner harbour, the British Columbia Parliament Buildings, are now to your right.  First opened in 1898, they were designed by the famed architect Francis Rattenbury, who subsequently designed the Empress Hotel and the CPR Steamship building.  If you are new to the city make sure you come back to the inner harbour at night to check out the lights. 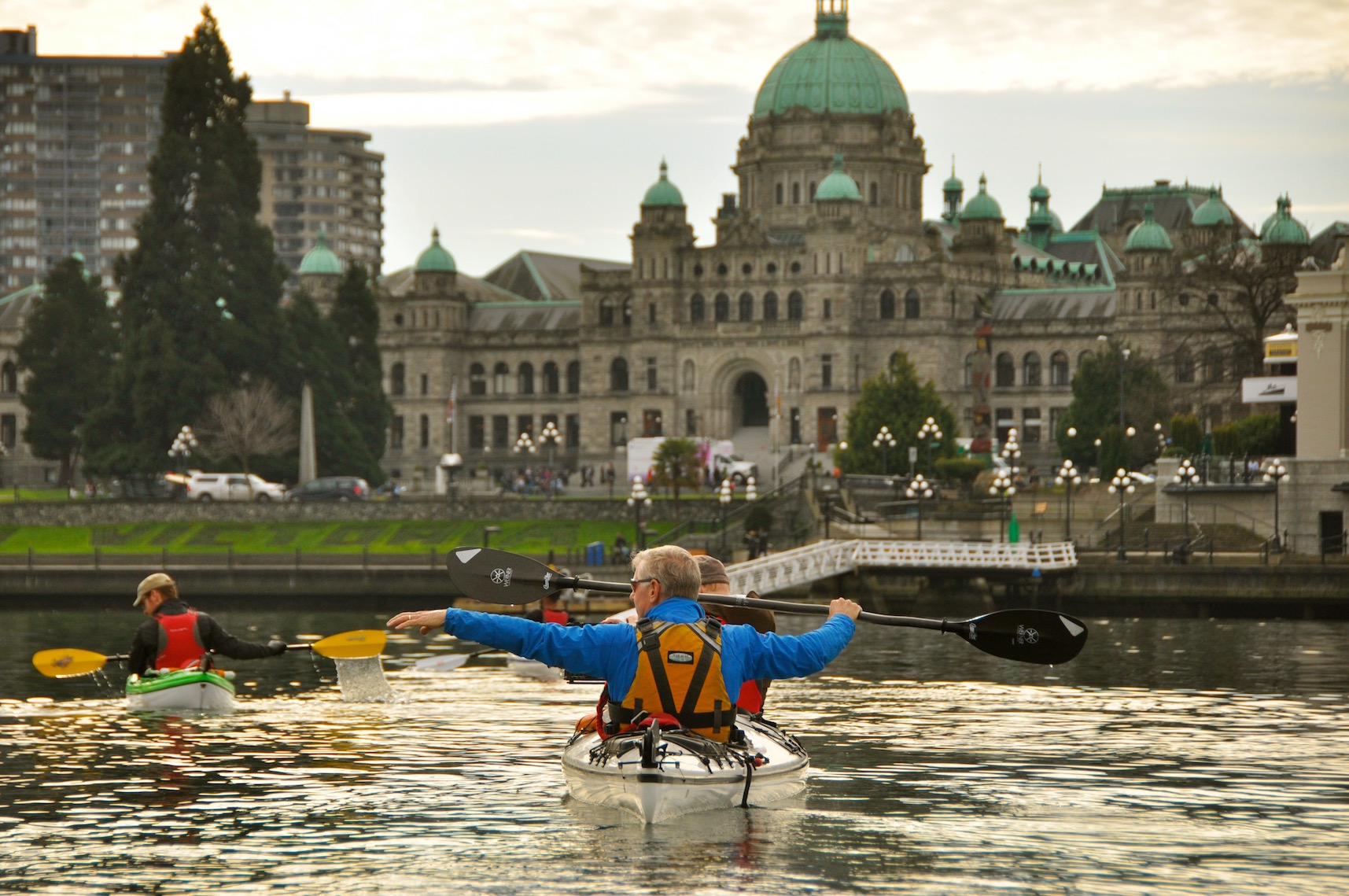 The BC Legislative Buildings in the Inner Harbour

Dominating the harbour to the left is the Victoria Visitor Centre.  This Art Deco building was originally built in 1931 as a service station for Imperial Oil.  The building’s tower featured a 10 million candle power Sperry Beacon, intended as a navigational aid for float planes approaching Victoria’s Inner Harbour.  The beacon could be seen up to 100 kilometers (60 miles) away. The beacon is still in place but is not in use anymore. 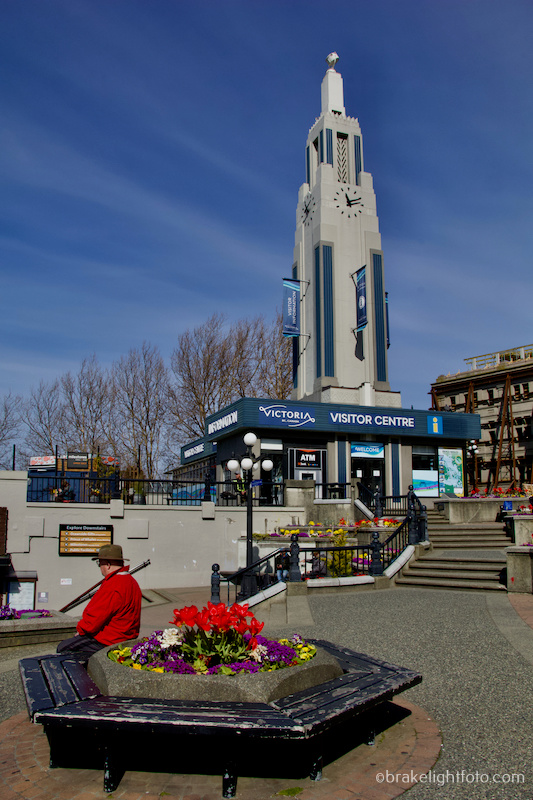 The large building behind the Tourism Centre is the ‘Customs House’. It has recently undergone a major redevelopment into luxury condos keeping just the original facade intact.  The point of land just to the south of the Customs House and behind the seaplane docks is known as Ship Point, site of many festivals and music events held here in the summertime.

To the left of Ship Point, up on Wharf St, is a beautiful old building, very noticeable because of it’s bright pink colour.  This is the Old Victoria Customs House or the ‘Malahat Building’ built around 1875.

Once you are back at the narrows, continue along the left hand shore. On your left is Laurel Point and the Inn at Laurel Point. Running along the shore is the Peter Pollen Walkway which leads from the inner harbour to Fisherman’s Wharf.

Paddle craft are allowed to transit the harbour using the inbound/outbound boat lanes on either side of the yellow lane buoys (see the Traffic Scheme Map above).  However, we recommend you stay as close as possible to the docks and shore as you approach Fisherman’s Wharf to avoid holding up faster moving power craft and avoid conflict with incoming boats which will be staying to the right of the yellow buoy markers in the channel. 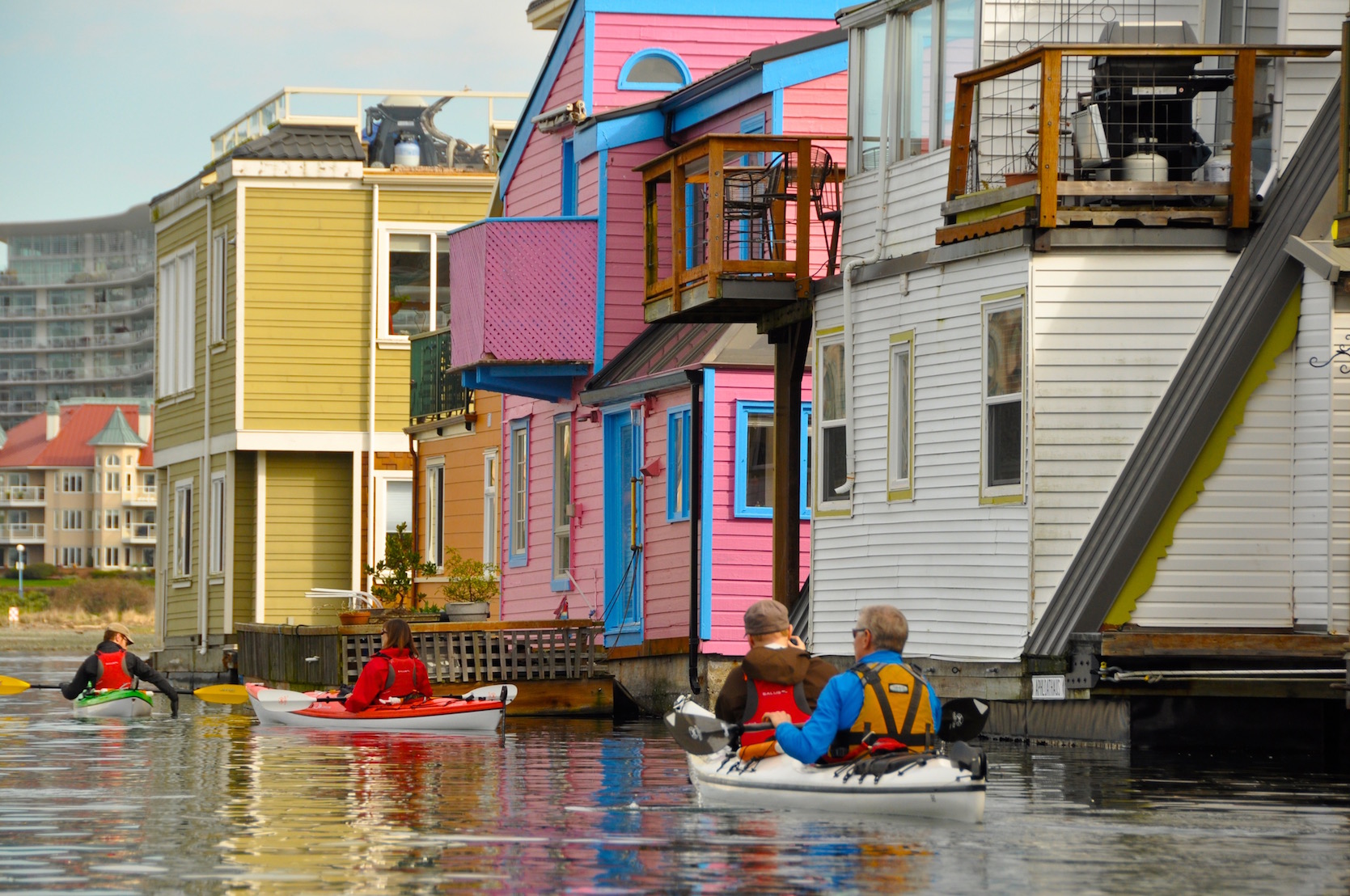 At Fisherman’s Wharf you will find a bright, colourful collection of float homes and businesses, including gift shops, coffee shops, restaurants and even an ice cream shop! You may definitely want to plan to stop for lunch or a snack here. If you do choose to stop, paddle down between “C” & “D” docks.  At the end of this passage you will find a low platform for getting in and out of your boat. It helps to bring a bow line along so you can tie your boats to the dock and leave them floating. 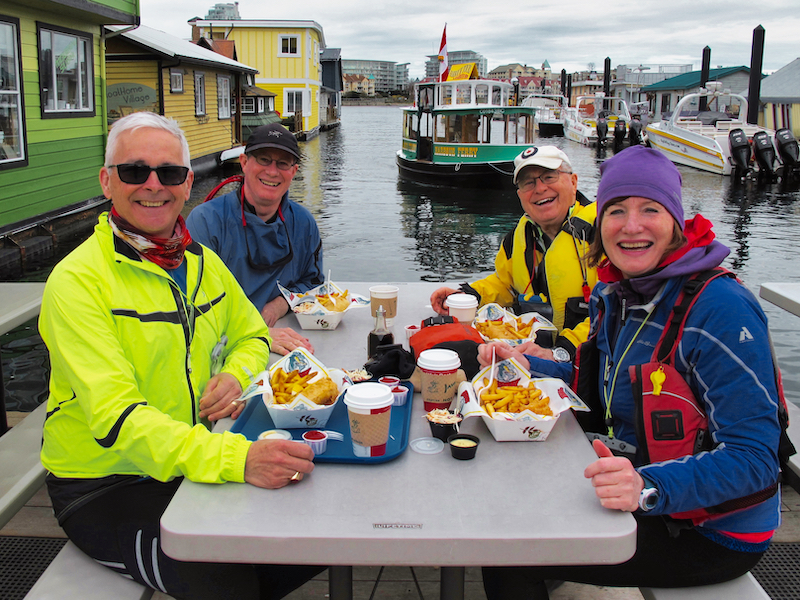 Once past Fisherman’s wharf you come to will come to Shoal Point. Rounding the point you will be enter the outer harbour.  This is a good place to stop and evaluate the conditions as westerly winds can create significant wave action along this shore. If conditions are good you can continue along to Ogden Point.  If not you can turn around here and follow the same route back to the Ocean River Docks.   Shoal Point is also the other point where you can legally cross the harbour.

Rather than continue to Ogden Point, you can cross over to Work Point and return to the inner harbour passing West Bay and follow the north shore back.  Once again, do not cross if the white lights are flashing. Exert caution if you pass in front of the Victoria International Marina, as wave action rebounding off the docks can caused confused seas. If conditions are rough, there is a paddle craft passage under the buildings closer to shore. Remember to stay to the shoreward side of the white taxi way buoys. 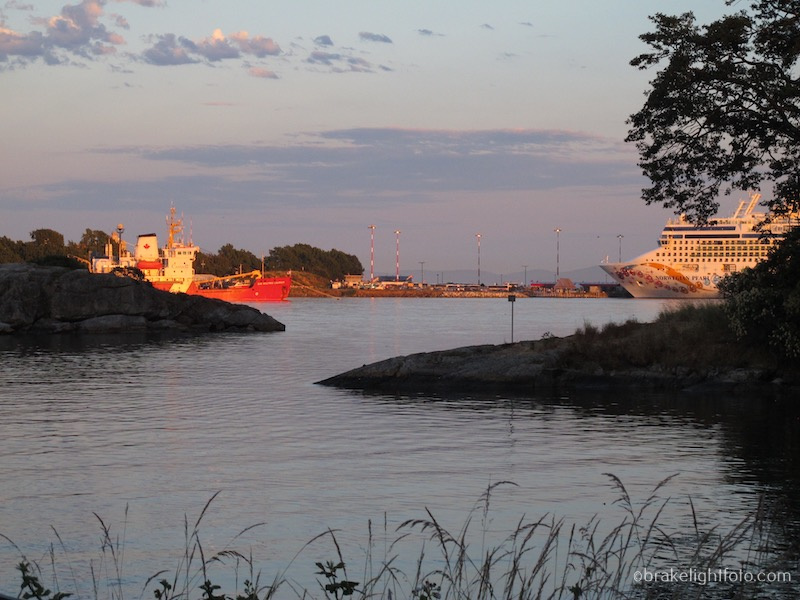 As you continue around Shoal Point you will see the Canadian Coast Guard facility.  Further along, you will pass the James Bay Angler’s Boat ramp, and shortly thereafter, the heliport used by Helijet Airways.  Don’t pass too close to shore by the heliport as there can be dangerous down-wash created by the helicopters taking off and landing. 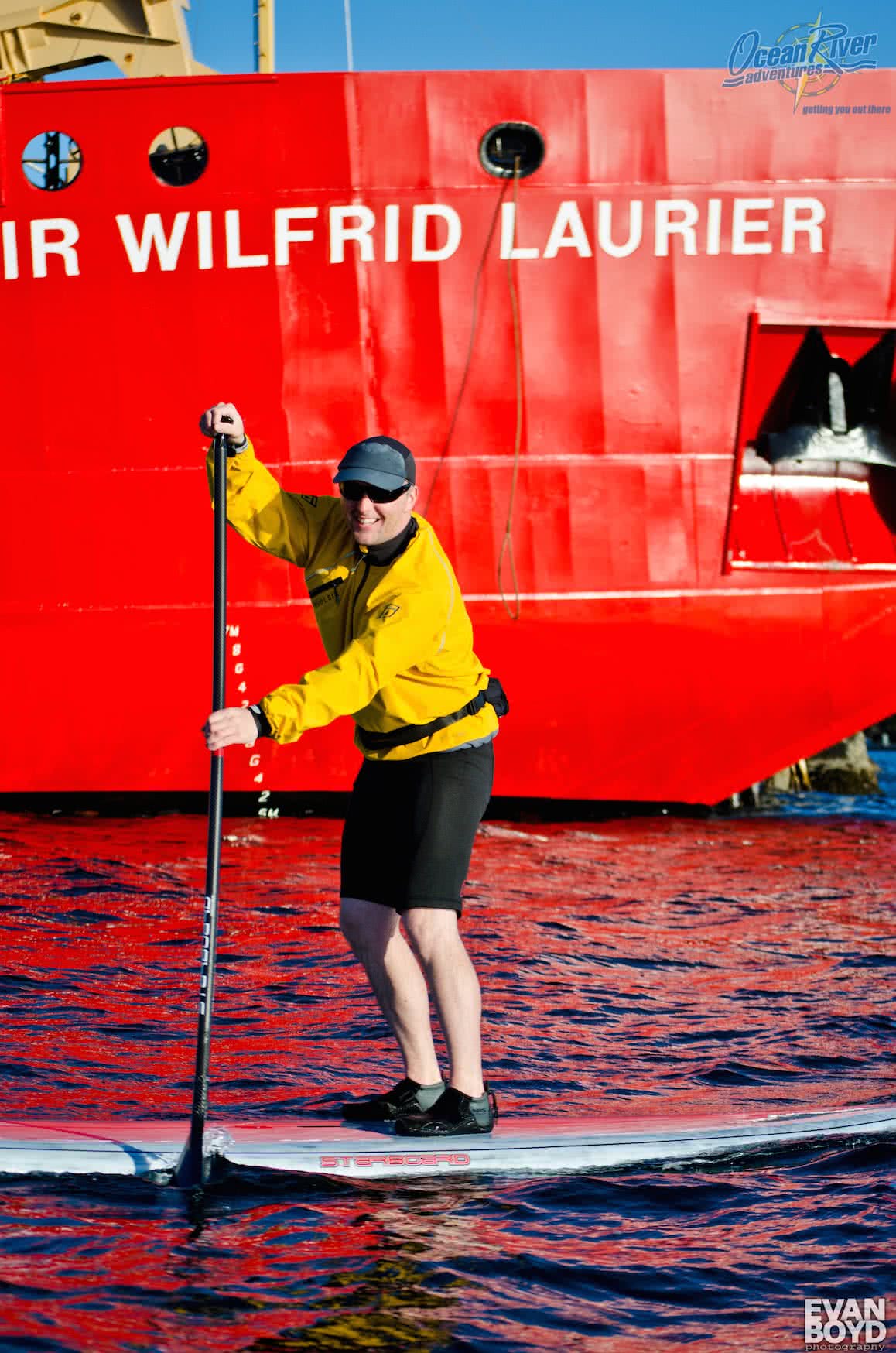 Next, you will pass by the Ogden Point Cruise Ship Terminal.  Victoria is Canada’s busiest cruise ship port of call. During the tourist season, from near the end of April to the end of September, there is almost always a cruise ship or two docked here, and sometimes more.  Be cognizant of arriving and departing vessels. 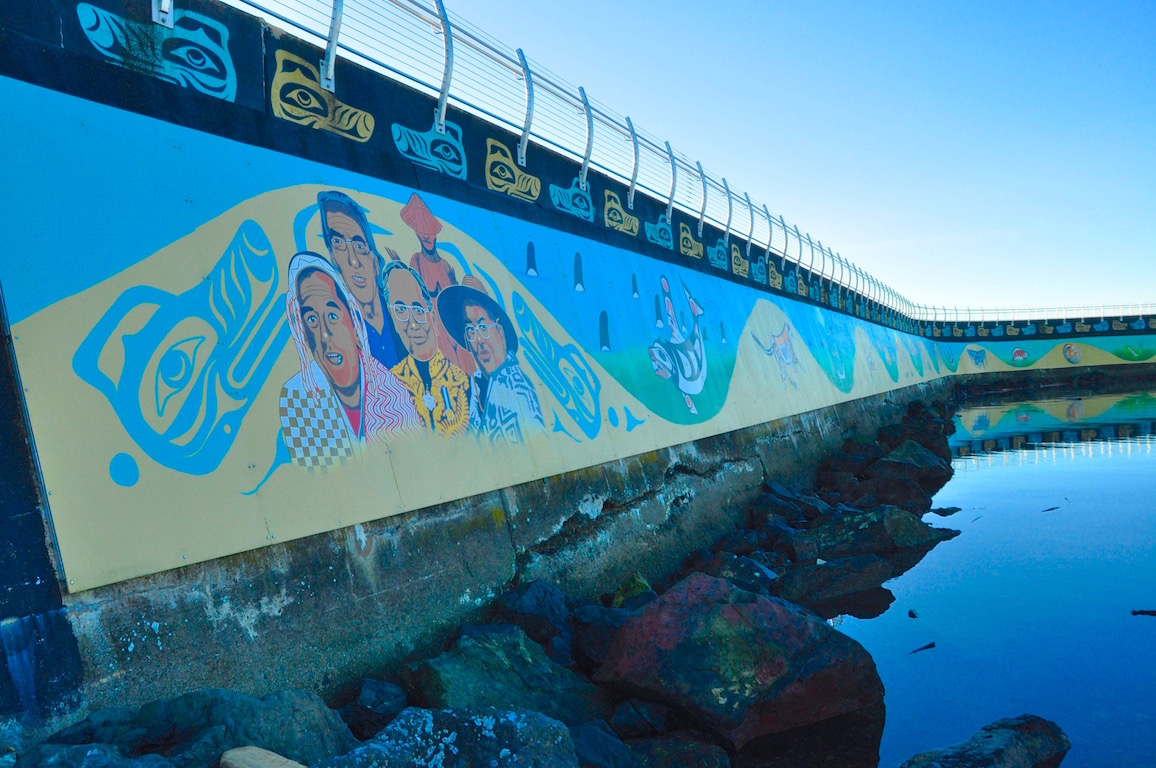 Once past the cruise ship docks, you will see the Ogden Point Breakwater.  This imposing 800 meter (2,500 foot) granite and concrete breakwater was completed in 1916 in anticipation of an increase in shipping expected from the Panama Canal, which was then under construction. Make sure you paddle in along the inside of breakwater and check out the beautiful Unity Wall, which covers the whole 800 meters of the breakwater.  The mural was a project initiated by the Greater Victoria Harbour Authority in collaboration with the Songhees and Esquimalt First Nations and shares the legends of the Coast Salish people.

On the left, tied up to the docks is the ‘Breakwater Barge’.  On Friday nights throughout the summer you can celebrate the end of the week with food trucks, live music, craft beer and cider.

Ogden Point is the end of this route.  You can turn around from here and follow the same route back, staying close to the shore to avoid incoming and outgoing boat and aircraft traffic, or cross at Shoal Point towards Work Point and West Bay then head down the north side of the inner harbour.

Paddling Past the Breakwater

If you decide to venture out to the exposed side of breakwater be very careful.  The water conditions can be very rough.  If there are ocean swells rolling in, very confused sea conditions can occur as the waves rebound off the breakwater.   Fairly significant currents can also flow past the breakwater adding to the confusion.

We really hope you enjoy your ‘Harbour Tour’. 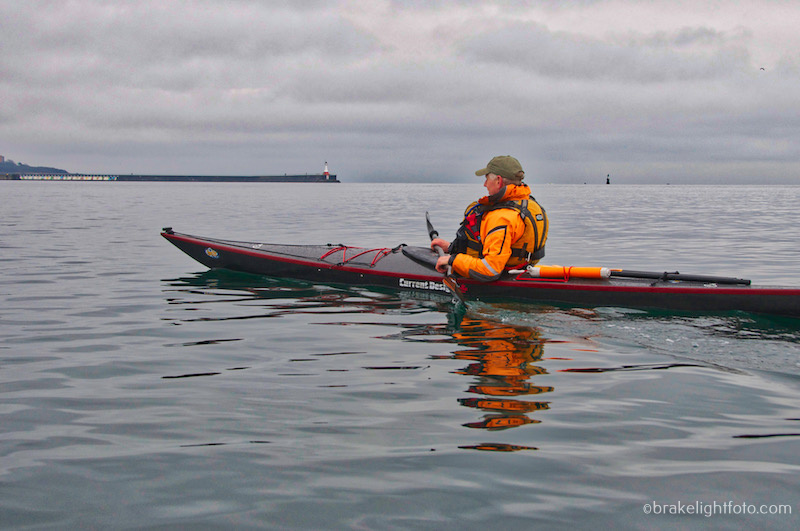 Off Ogden Point Breakwater in the Outer Harbour