The top three photos from the 2017 Ocean River photo contest

It was extremely difficult to choose winners for this photo contest as there were so many amazing images sent in. We had photos of wildlife, photos of people in kayaks, photos of people on paddleboards and even shots of kayaks abandoned on beaches. After much thought, we finally settled on the three photos we just could not live without and you will see them bellow.

The top photo for us illustrated the essence of kayaking on our coast. It mixed the rugged yet elegant terrain and seas with some very clear patriotism. I am sure you agree, this photo has some serious ‘Canada” going on. Special thanks go out to Gastao Oliveira from Saltspring for this beautiful photo that outlines so many things we all love about kayaking as well as the west coast of Canada.

Photo by Gastao Oliveira shot on an Olympus Digital Camera

We don’t want to differentiate between second and third so let’s just consider these both second place. Both photos are very different and that is why we love them. They are both action rich and inspiring shots that illustrate the two different sides of Ocean River.

A special thank you to Robert Zacharias for his wonderful shot taken off Valdes/Galiano Islands, mid-September 2016 as 9 paddlers head out for a five-day camping trip. The colours and joy in this photo are only over-shadowed by the skill and determination of the paddlers. A beautiful shot illustrating our beautiful Salish Sea. You can just feel the movement here. 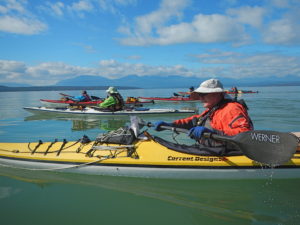 Our last top three photo comes to us from Chris George of this insane image of the surf at Jordan River and a paddler navigating through the waves. Just take a long look at those misty mountains mirroring the crash of the waves. We love this image, it is so wild and shows a completely different side of what the Ocean River lifestyle is about. We may be known as a Kayak shop but we are so extremely passionate about Stand up Paddleboarding and the advances it is making. 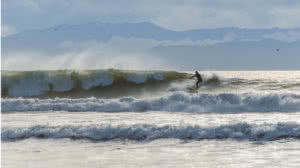 Thank you again to all who entered, we greatly appreciate your support and enthusiasm and find it humbling how many people chose to participate! Thank you for making contests and events such as this possible.