What is the difference between Greenland and Euro blade paddling

There are many forms of kayaking and within these different subcategories lives two separate styles recognized easily by the paddle used. There are Euro blade and Greenland paddle styles, and if you have not encountered both in some way yet then this will be super interesting for you.

There is always the question of which is better, below we will explain a few of the differences rather than argue one is better than the other.

Greenland paddles are great for rolling, can be easier on the body and can be used in almost any conditions.

Greenland Guru James Manke swears by the Greenland Paddle, he says it has lasted the test of time for a reason. There are many things that you can do with a Greenland paddle including the 35 different types of Greenland rolls that you cannot do with a Euro blade – you can do some but not all.

The actual forward stroke is quite different with the Greenlander than what is recommended with a euro blade and requires a little more arms. The traditionalists love the Greenland paddle as it gives off a certain nostalgia that can bring paddling back to its roots. 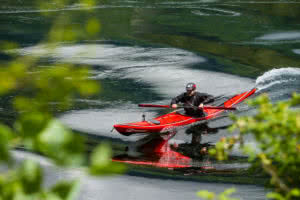 James Manke cruising along with a Greenland paddle – photo by Jillian A. Brown

The Euro blade paddle design offers its own set of advantages, one being the diversity of designs available. Paddlers can choose between low angle, touring style paddles and high angle, rough water or performance style paddles. 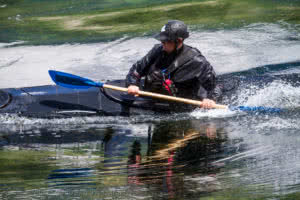 Lee Richardson surfing at Skookumchuck – photo by Jillian A. Brown

The Best for Injury Prevention

The argument still goes on about which is the best for injury prevention. Some say the Greenland paddle is the best for injury prevention because it is so much easier on the joints, however, because the paddle has less purchase that means you have to take more strokes to go the same distance, the repetitive motion of the movement of the joints is more than with the Euro Blade. The Euro Blade offers a little more efficiency because of its purchase and with some training on the forward stroke and torso rotation some argue it has better injury prevention characteristics.

Both types of paddles are available in a few different types of materials. You can purchase paddles made of carbon fibre, wood, fibreglass, plastic or composites. The composite and carbon fibre paddles are the most expensive, from there, the range starts to go down to a carbon shaft with fibreglass blades. Although we see a lot more Greenland paddles made of wood there are carbon Greenland paddles available on the market. 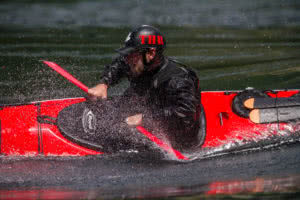 James Manke paddling with a Greenland Paddle – Photo by Jillian A. Brown

So which is better?

The whole debate really comes down to personal preference. The debate will continue to go on between Euro blades and Greenland paddlers, but we encourage you to try both and see if you can find applications that work for both. The diversity of the sport of paddling and playing around with different styles of paddles is always fun and can open doors to new challenges.

Both designs are useful and it ultimately becomes personal preference that rules the decision making. What do you prefer?

One response to “Greenland vs Euro blade paddling”